Everyone is shouting buy Bitcoin. Prices are bottoming up and that might be correct. We don’t want to tag along and buy with the crowd and that’s why we need to see our buy triggers at $7,800 if not $8,000 being hit in the coming days. That’s not all, for us to be confident that Bitcoin buyers would add to the five percent it has in the last week, then volume spikes must accompany that up-thrust.

It is true that banks are really finding it hard to adjust to new competition. But, the thing is, what powers their nemesis, cryptocurrencies, the blockchain is not going anywhere anytime. It is changing how things are being done. Unfortunately, playing along is but inevitable. So, over the weekend Bittrex through their CEO Bill Shihara did announce that they now have a new partnership with New York’s signature.

In their agreement, customers in some US states would directly purchase cryptocurrencies using their US Accounts. Of course, this applies to customers who have an account with signature and comply with the always tight KYC and AML rules which stifle innovation and creativity. If this goes through, Bill Shihara said, then a better environment would exist which would foster business for banks and crypto exchanges who are already working hard to sync with regulatory stipulations.

While this is happening in the US, Japanese corporations are taking crypto to a new level. While laying their new strategy, Abic Corporation said they shall, beginning June 1-On Friday last week-offer Bitcoin secured loans. This is a smart move because Bitcoin and other cryptocurrency capital gains are subject to tax which is “sometimes high as 55 percent”.

With this initiative, Bitcoin holders can access JPY loans without necessarily liquidating their coins and as you can see, this is overwhelmingly beneficial for BTC users. Bitcoin is the only collateral and borrowers can get up-to $9.13 million or 1 billion Japanese Yen enjoying up-to 15 percent in annual interest rates. 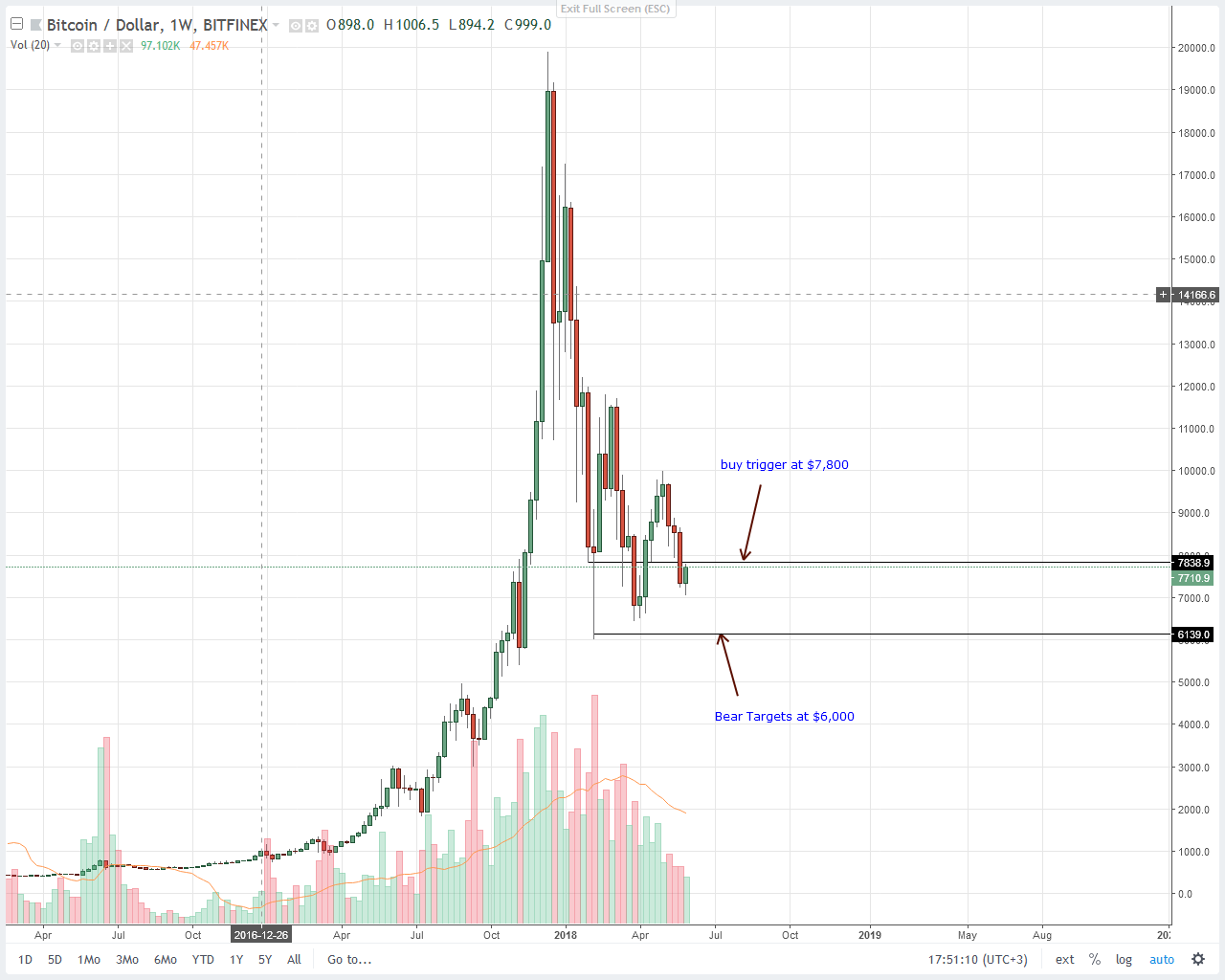 If we draw a trend line to gauge the direction of price action then we can see that bears are in charge in this time frame. That’s when we consider the last five months price action. In the last quarter though, prices have been “all over the place” if we may say but the last two months events are changing our view on trend direction. Bitcoin prices are bottoming out and we can compare April and May candlestick where the former was extremely bullish with prices testing $10,000 before that correction in May.

Our metrics indicate that last month was a long covering event with lower lows recovering more than 70 percent of April gains simply because participation was low. The average weekly volumes in April were about 170K while in April it’s above 200K. After last week’s bullish candlestick and rejection of lower prices albeit high volumes is an indication of bear pressure exhaustion and a possible shift of momentum. 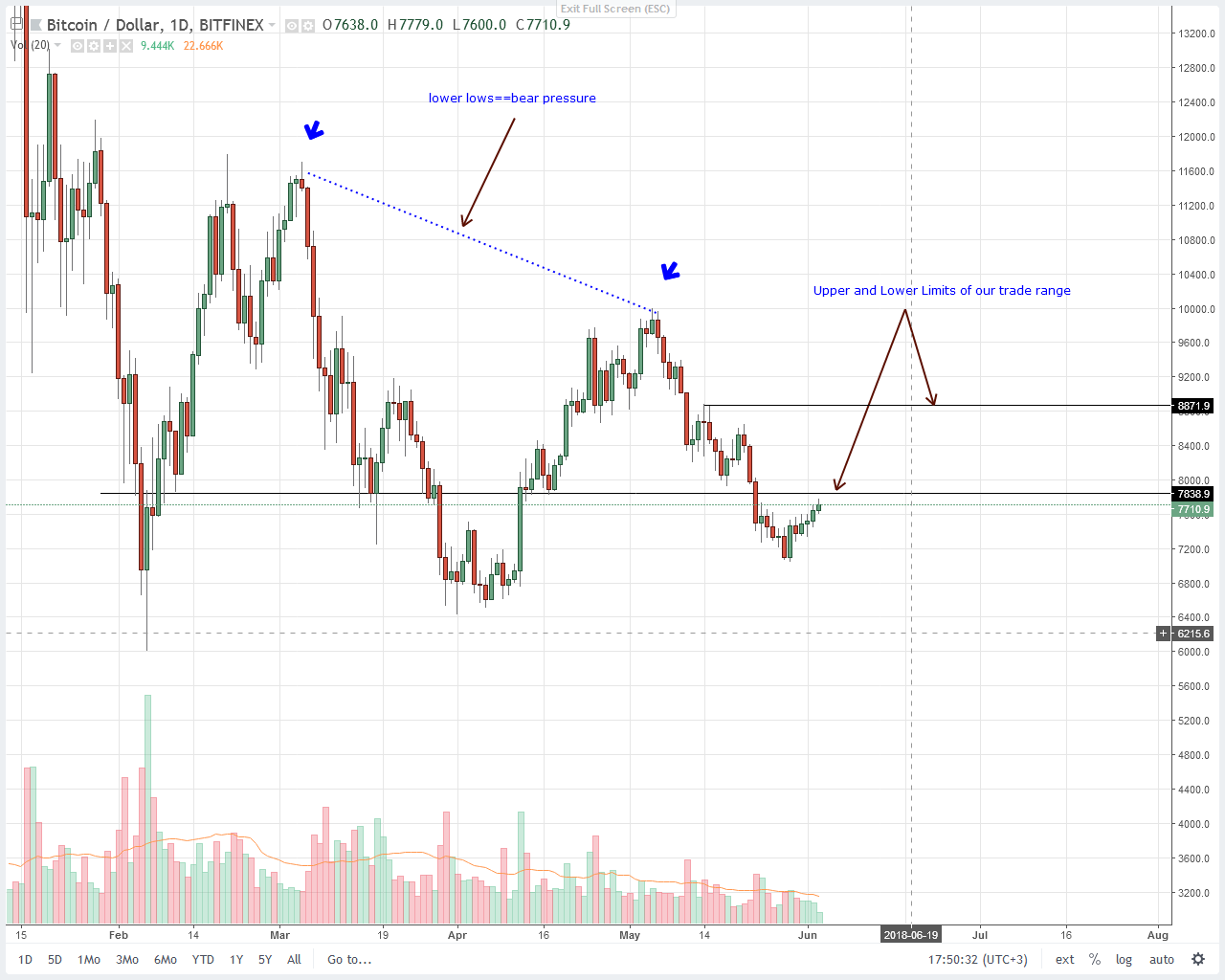 For buyers to be truly in charge what I need to see is a surge past $7,800 and $8,000. It’s that simple and clear and that’s why despite these streams of bullish candlesticks, nothing is conclusive until we see Bitcoin supporters pulling our buy triggers at $7,800.

Considering how price action is shaping out in the daily chart, we might see that happening today and for that to happen, we must see a spike in participation as that minor resistance is hit. Afterwards, we might be free to buy on pullbacks on lower time frames and aim first at $10,000.