There is a supremacy “war” going on between BTC and Bitcoin Cash but the common thing is that both are bleeding. At current prices, $600 is but some ticks away and that means caution since there have been reaction at this level when we point out Bitcoin Cash daily price chart. Today, I propose staying neutral with the usual bearish skew. That’s unless there is a spike breaking above $850, our immediate resistance line which also doubles up as a bull trigger line.

BitPico are a group of developers who are clearly-pro Bitcoin (BTC) and with their planned attack, they are ready to show the whole world how “easy it is to take down the Bitcoin Cash network” and make “Roger Ver Cry”. This seems to be a retaliation and a show of proof following Bitcoin Cash claims that they indeed did their own stress test. In their response, BitPico says their independent tests will go on to show how Bitcoin Cash is “centralized and controlled”. Already this promises to be an interesting event. Like all stress tests, the results following this intentional attack would reveal the depth and robustness of the Bitcoin Cash network.

We've created a @github repository for the Stage 1 #bcash $bch network test toolkit. https://t.co/X5hHXoWJSf Hopefully others will compile and help test once pushed. We expect 1 stage every 28 days until all 3 stages are running in-parallel. #cryptocurrency #cybersecurity ?

The members behind this group are strong supporters of Segwit 2x and Bitcoin’s LN development. However, despite disappointing events following issues around Segwit 2X implementation-that eventually birthed BCH, the fact that Segwit is live is overly positive. After adoption by full nodes, settlement time and network fees have seen significant improvements. In fact statistics shows that Bitcoin fees were once lower than Bitcoin Cash’s at some point.

The #bcash $bch @bitcoin attack has been started; it will continue to run as we work to amplify it over the coming months. We expect to have 5000 Bcash attack nodes in roughly 6 weeks and then we will multi-fork the chain. @rogerkver will now cry ?. #hacking #skills #security pic.twitter.com/dR8ksy6Lz8

In a series of tweets, the core members of BitPico whose identities are not yet available to the public said they are ready to carry out a 51 percent attack. Unfortunately for Bitcoin Cash, these guys know their thing. They have successfully stress-tested Bitcoin’s Lightning Network after launching a coordinated attack receiving applause from Andreas Antonopoulos in the process. 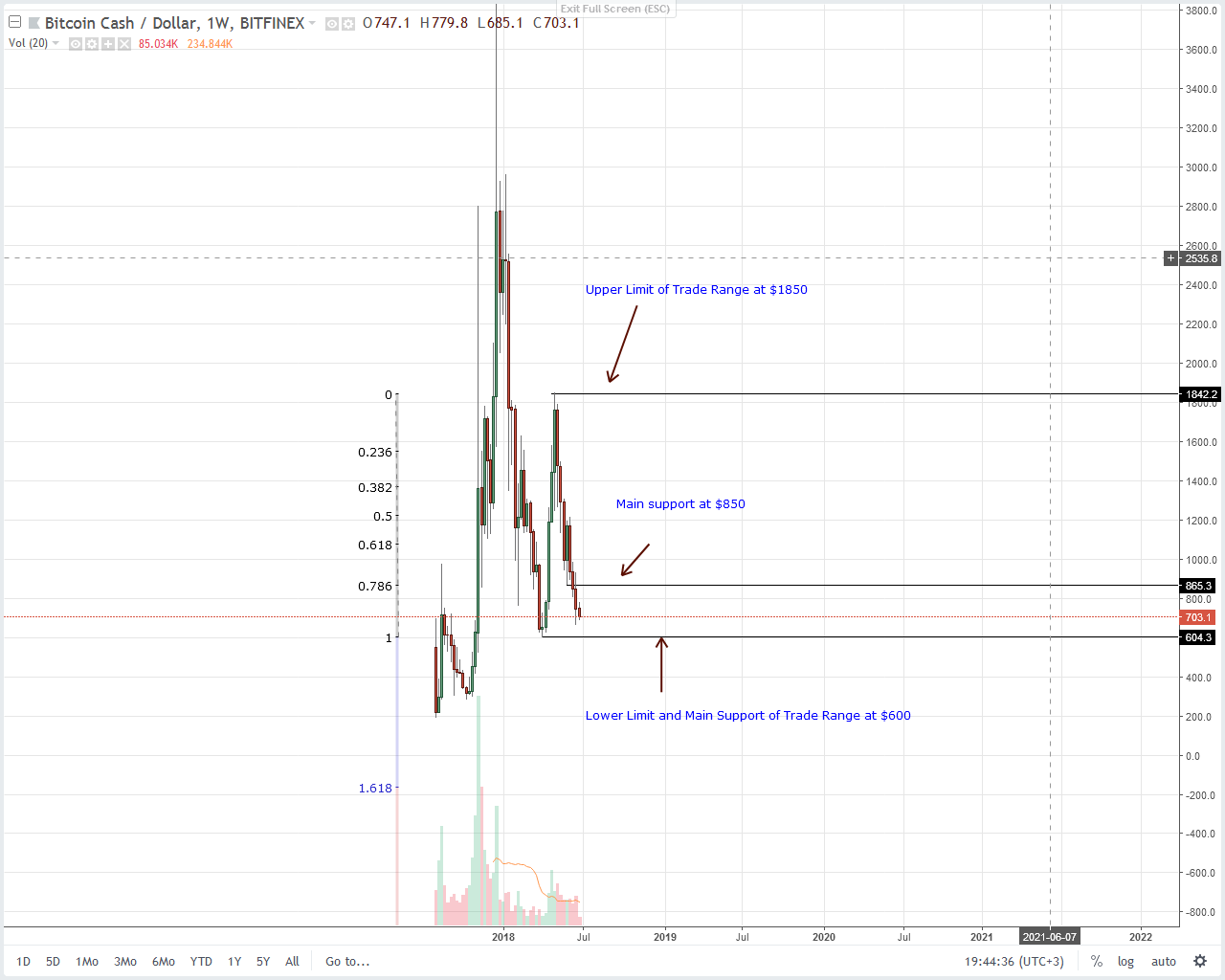 Regardless of the drama and shills, the fact that BCH is on free fall is a cause of concern. Week over week, statistics from different coin trackers shows that it is down 20 percent and complementing last week’s bear pressure. While we remain bearish until we see hints of higher highs, the simple fact that we are so close to the main support line at $600 as the weekly chart shows means either we lock in some profits or pause taking shorts for the time being. 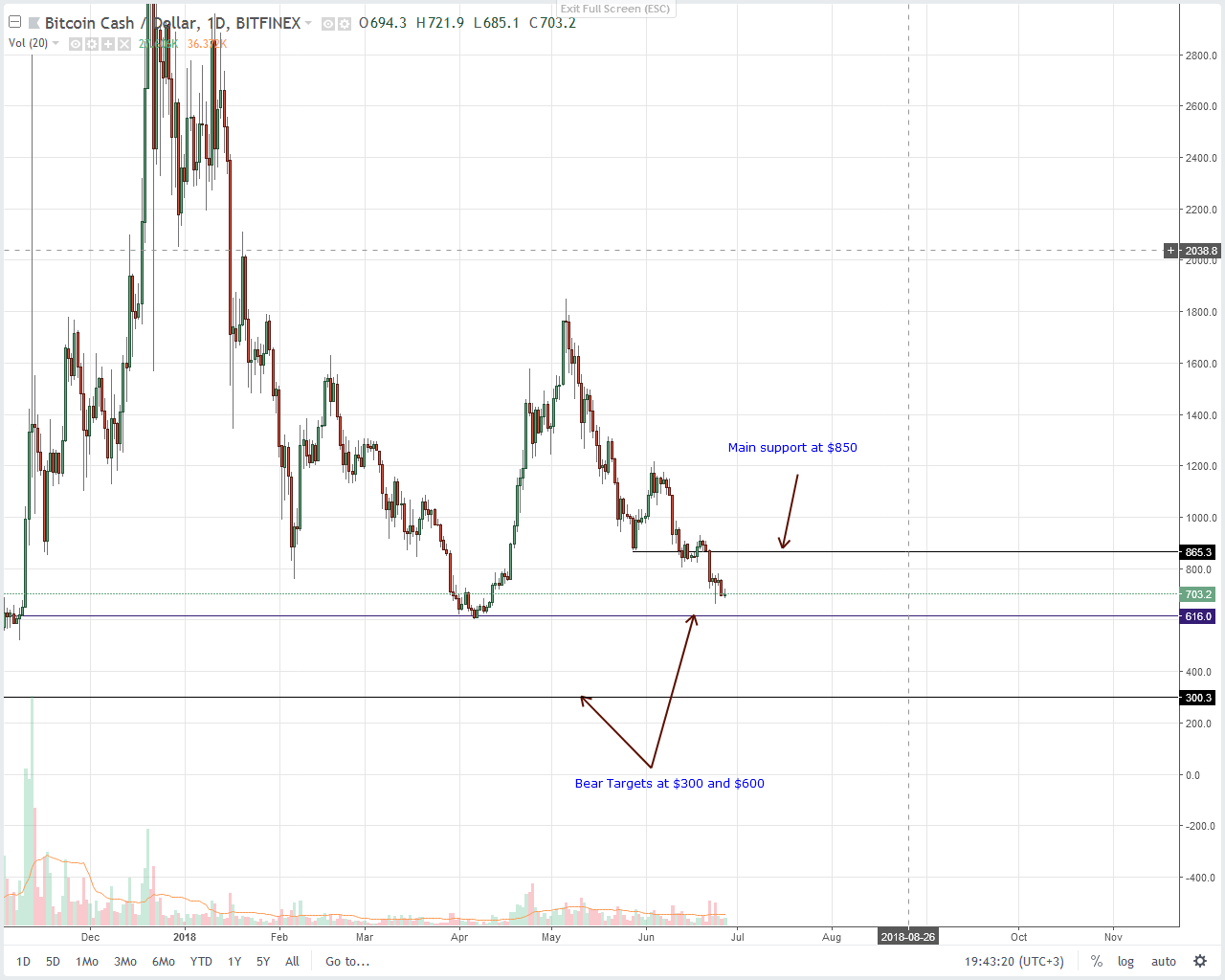 Like it has been the case in the past two months after prices peaked in late April, sellers are in charge. As aforementioned, either we take a wait and see approach as bears test $600 or sell and aim for $300 with sell profits locked. The reasoning is simple, $600 like $6,000 in BTC are influential price tags and regions of strong technical support. Now, should there be a depreciation below them, aim for $300 which is also Bitcoin Cash all-time lows.