IOHK: “Cardano works for the Best Interest of the User and Ecosystem”: Cardano (ADA) Technical Analysis

Charles Hoskinson is the co-founder of Cardano, he is authoritative and spearheads Cardano’s development. In the spirit of interoperability, he reached out to Justin Sun of Tron. In a publicized tweet, he asked him to consider integrating Mantis, which ETC uses, instead of their code which appears to be an “Ethereum Java” fork. Even though this didn’t affect price, ADA is relatively stable and testing major support at 12 cents.

In 10 short years, blockchain and crypto has been propelled to the mainstream. During this formative stage, there are supporters-who have their reasons- and critics who think this buzz will die off naturally. Well, yes it may or may not.

.@LarsBrunjes is leading the work on incentives in #Cardano, the means of encouraging people to participate in the protocol and behave in a way that is in the best interests of all users and the system as a whole. Watch his presentation on incentives here: https://t.co/WMtu41fMVz

Regardless of their stand, many argue that Cardano is here to stay. They look at Charles, the main point man and see a future where DApps would run smoothly with minimum fees, a scalable network and above all with a tinge of regulatory consideration all in Cardano.

Cardano uses a proof-of-stake algorithm called Ouroboros. IOHK's latest research paper in this field is Ouroboros Genesis which is a step forward in the cryptography that powers cryptocurrency systems. Watch the video by Professor Kiayias here: https://t.co/dVtT8tZqIZ

Since their project announcement, Cardano takes pride in their Proof of Stake consensus algorithm that is secure and publically audited. Besides, its source code is peer reviewed and has some impressive updates as far as their wallets and source code development are concerned. That’s not all. Cardano’s team features expert engineers and blockchain influencers prioritizing the creation of an interoperable, sustainable and an efficient platform.

On the other hand, Emurgo, a wing of Cardano that helps businesses integrate with their blockchain has announced a joint venture with some of the leading Indonesian enterprises. In a consortium led by Hero Group, Emurgo and Cardano believes they can provide efficient solutions and consequently help scale their business. In a statement, the President of Hero Group said blockchain “will change global trade, retail and financing” and “which they need to understand and be involved in its growth and expansion”. 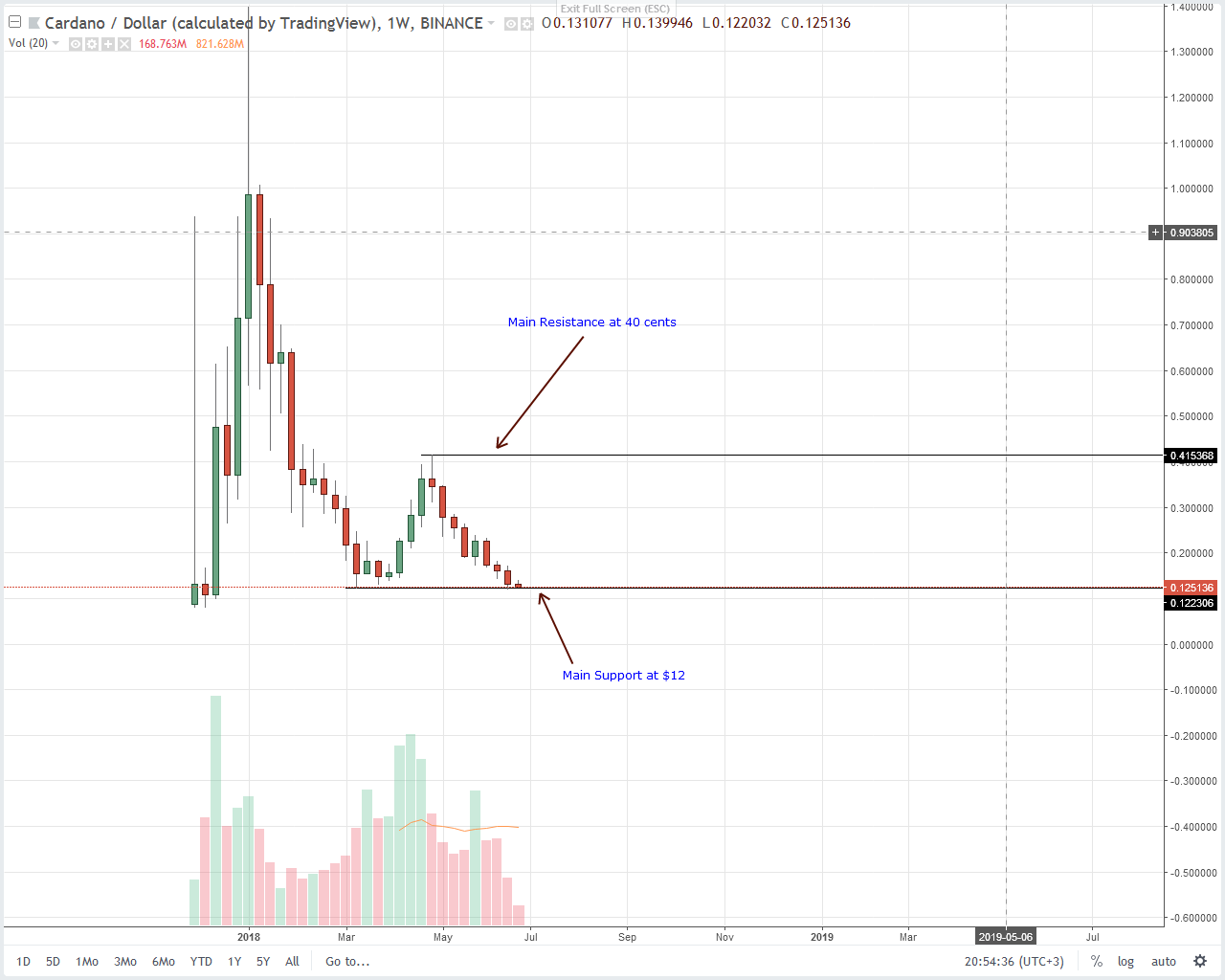 Still at position 6 in the liquidity table, ADA continue to struggle against sell pressure. In week over week basis, ADA is down 20 percent and might even add more assuming there is a break below 12 cents. This is the main support line as highlighted in our previous analysis.

Because of the speed of depreciation especially after last week’s spike in sell pressure, my recommendation-when we take a top-down approach is to stay neutral. That’s until after there are strong movements either in line with the general ADA sellers or when buyers step in to stem these bears and prevent movement below ADA’s all-time lows at 7 cents. 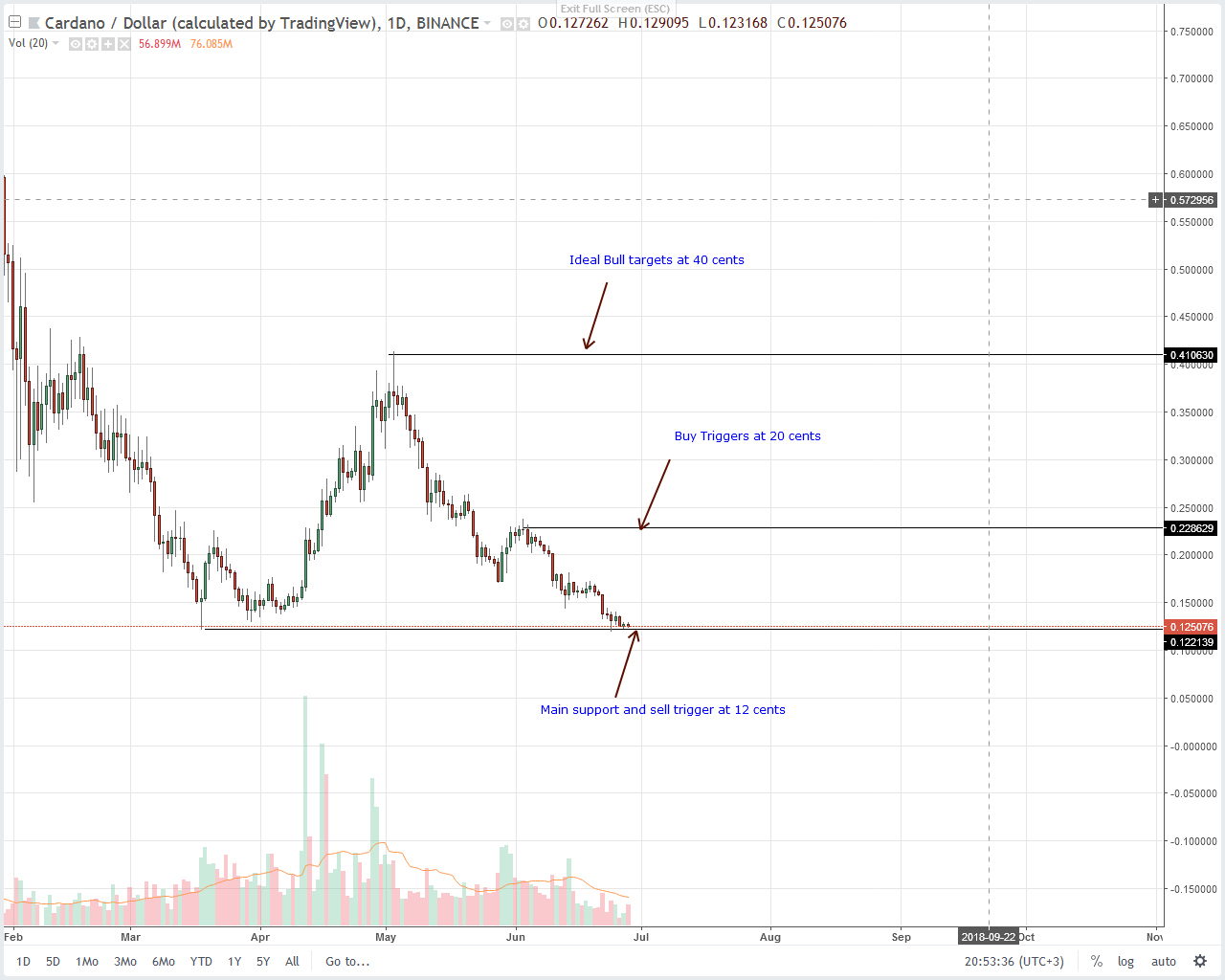 In the last 24 hours, there has been a slowdown in ADA’s depreciation. Unlike previous days, it’s actually down a one percent but still at around 12 cents. What’s of importance us is to trade with the trend and while would have been perfect, the mere fact that we are at a key support line and near ADA’s all-time lows calls for caution.

Technically, we take a neutral stand but with a bearish skew but if there is a recovery and ADA prices appreciate past 17 cents, we shall tow in with the buyers and buy on dips cancelling the current bear stance.