In the last day, Ethereum (ETH) has been on a slide losing three percent rejecting higher highs above $500. Even though we are net bullish, chances are ETH sellers might push lower below $450 triggering our sell trades with targets at $400 and $350.

Sergey Brin is the ninth richest man in the world with a net worth of approximately $52 billion. He’s also the co-founder of Google, now Alphabet-a multi-billion dollar company he founded with Larry Page. So, this guy is rich, occupies a position of influence and his comment on any topic/ security can cause a buzz in the industry. Sergey has been caught before praising cryptocurrencies and crediting them for creating a computing boom and a technological renaissance earlier this year.

Zero-knowledge proof is a cryptography principle which enables to prove something without actually revealing the knowledge. This technology is used to enable privacy features where users can conceal the transaction information while still securing the network on a public ledger.

He pointed out the demand caused by GPU friendly proof of work algorithms that some cryptocurrencies employ and how this was creating some sort of a boom. Besides, he couldn’t help but laud the privacy of zero-knowledge proofs employed by different cryptographic algorithms. Zero-knowledge proofs despite not being used by Ethereum have brought an edge to some as ZCash for example. This is so because they conceal transaction while allowing seamless connection to the public ledger.

Sergey Brin, Google's Co-founder, took a part on Blockchain Summit currently ongoing at Sir Richard Branson’s Morocco. He is mining #ethereum with his son.⚒️ And sees the future in this mind blowing technologies.

Recently, in a Blockchain Summit held in Morocco, Sergey revealed that he was an avid fan of different cryptocurrencies and in particular Ethereum which he said he was mining with his teenage son. This is a stamp of approval of some sorts for Ethereum which despite stiff competition still has more than 85 percent of blockchain start ups launching their ICOs on their smart contract platform. Of course, there are many reasons advising their decisions before settling on a proven platform complete with token standardization. All this is a plus for Ethereum. 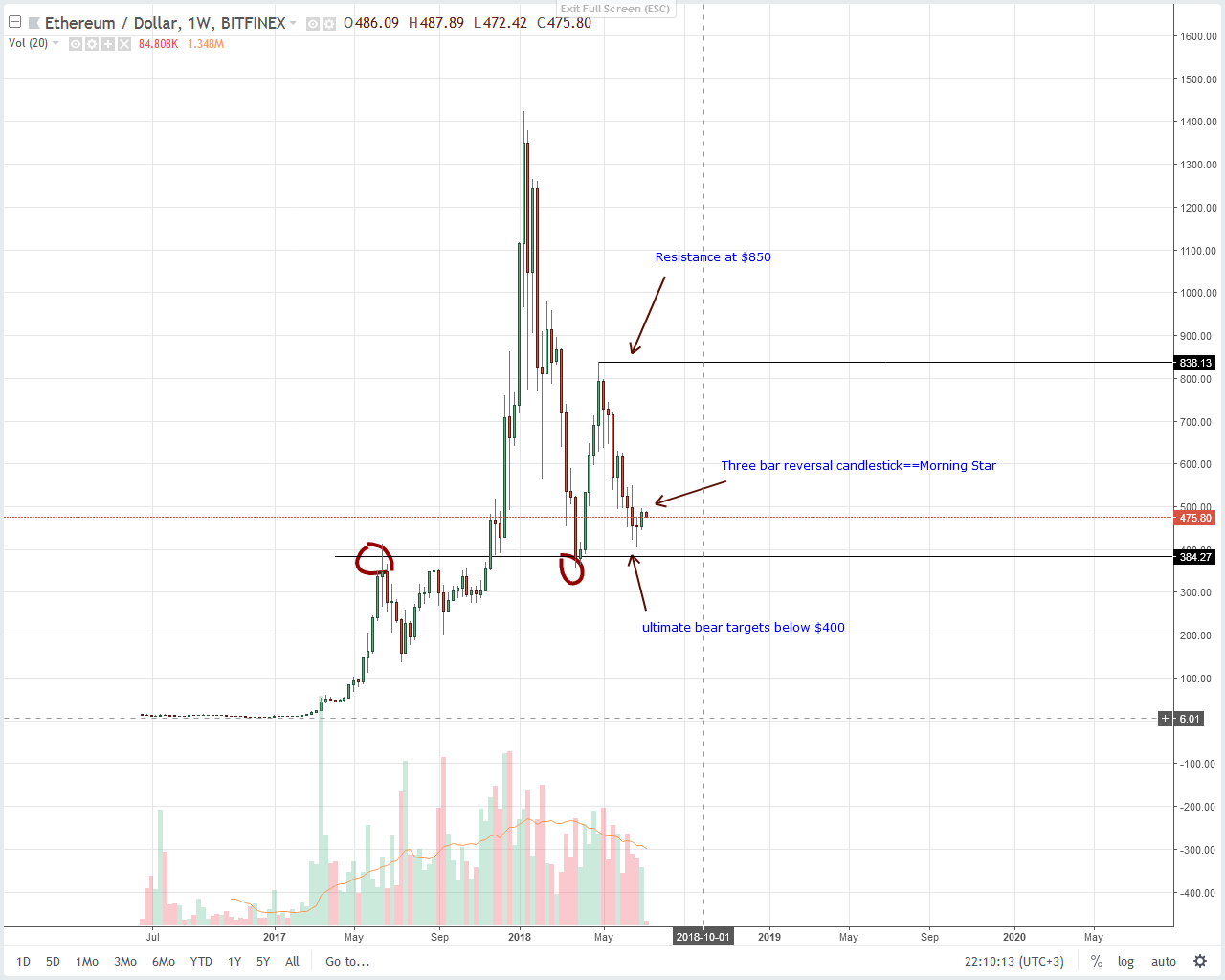 It’s clear that we have this three bar reversal pattern, the Morning Star at or around the main support line at $400 in this time frame. However, there seems to be resistance of higher highs despite the high volumes confirming that technical formation over the past three weeks. While we realize bears are in charge and edging closer to $400, it is how this week’s candle would close that could potential determine the short to medium trajectory of Ethereum (ETH). Any reversal of last week’s gains and close below $450 will effectively cancel our bullish skew. 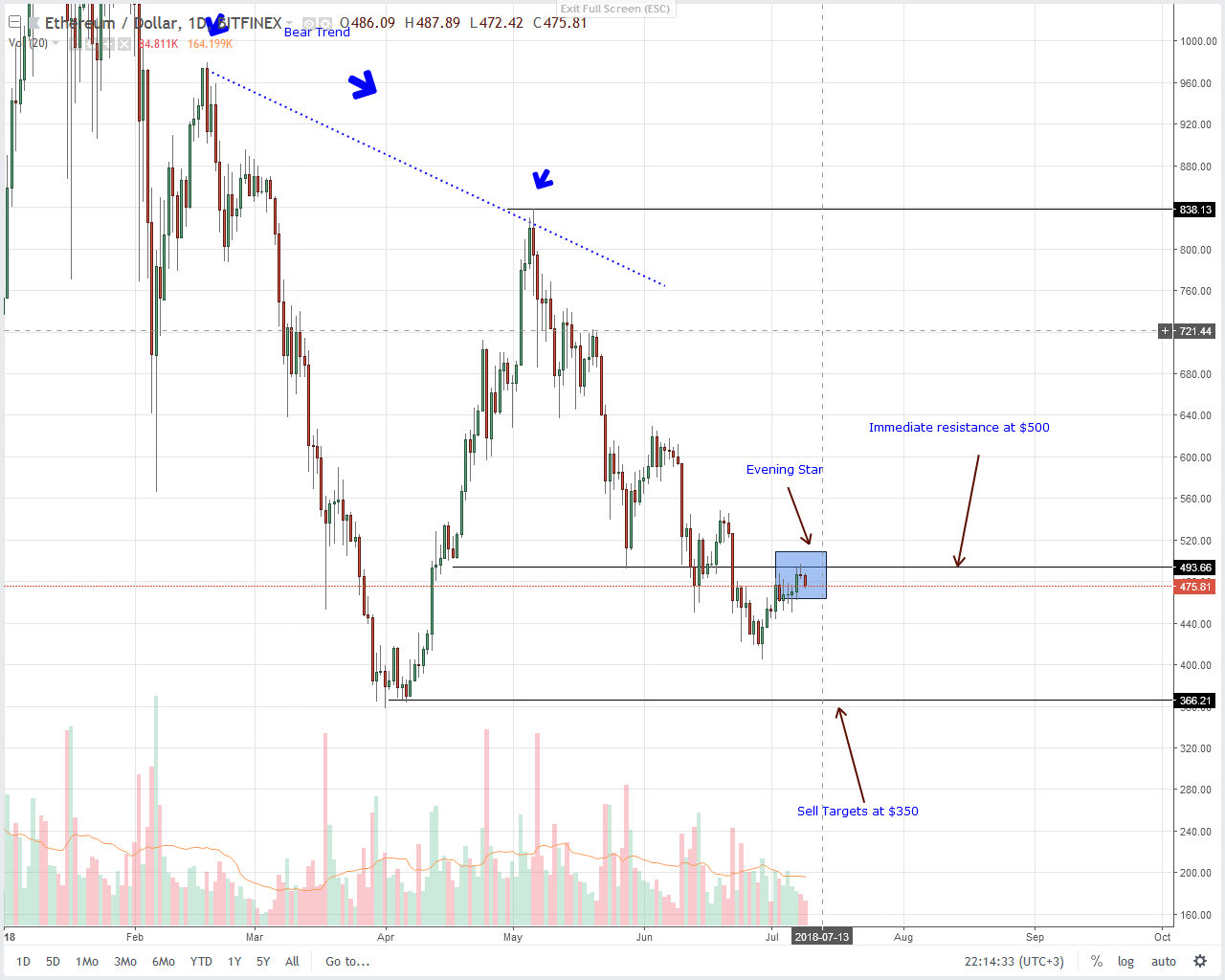 Overly, we were net bullish on ETH waiting for buyers to push above $500, our main trigger line. However, regardless of July 7 up-thrust, ETH buyers didn’t manage to close above that line. Now, as it stands, it seems like sellers are snapping back to trend. In fact odds are our $450 minor sell trigger line would be live depending on how the next two days candlesticks close. As ETH price action sway, we shall remain neutral until either of our trade conditions are met.