Next Article: Coinbase App Downloads Have Dropped, but Interest in Cryptos Isn't Waning

Crypto exchanges-regardless of their database location-are having a rough time with hackers. After several South Korean and Japanese attacks, Bancor got exploited and $12.5 million worth of BNT was used to withdraw ETH. It’s definitely bad press and sellers are spearheading this on-slaughter. So far, it’s double digit losses for EOS, IOTA, Tron and Litecoin. 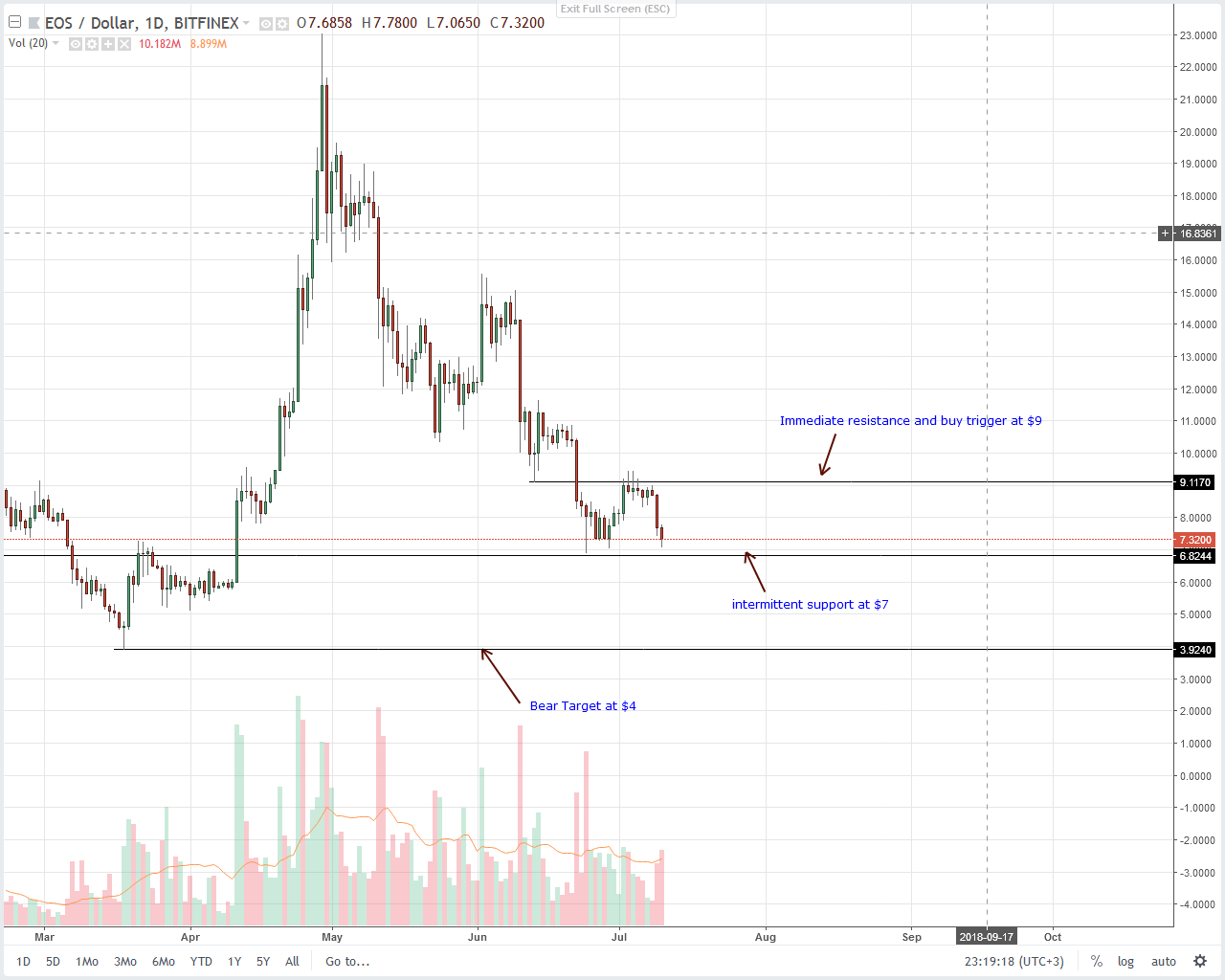 Isn’t it startling to know that Block One realize that they are powerful and actually don’t care about that. They have 100 million EOS tokens under them and should they begin using that to vote then EOSIO- despite all their calls of running on the ideals of blockchain-would just be another centralized database with Block1 calling the shots.

"If necessary Block One will vote."

I mean, it will even be easy for them to determine who get voted in as a BP and who gets the boot. Many are therefore expressing their disappointments saying Block One would no longer be that neutral third party. Well, they are right because how would they even know and pick BPs which they claim share the “same core values and ideals”? As far as the community knows, there is no laid out criteria for making that determination.

Back to price and EOS is sliding much to the relief of dApp developers keen on utilizing the blockchain for their own advantage. After that strong bearish engulfing pattern on July 9, sellers are now back in charge and invalidating our previous bullish stand. My suggestion is to either sell on pull backs today or wait for a break out trade below our immediate support at $7 with first targets at $4 as we trade with the general bear trend. Stops would be above yesterday’s highs at $8.3. 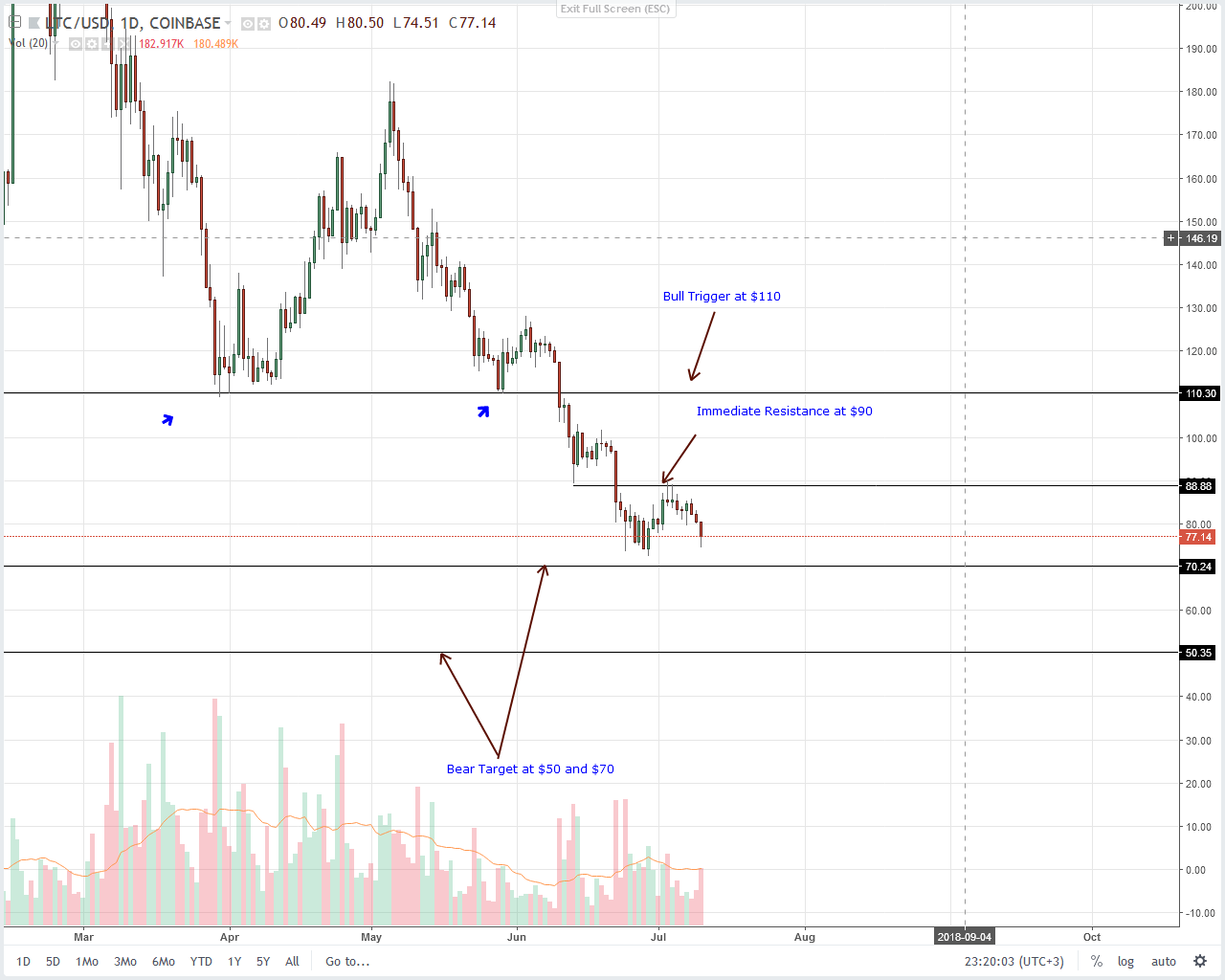 It’s turning out that exchanges-centralized or decentralized are not safe from hackers as Bancor found out on July 9. Charlie Lee, the founder of Litecoin, weighed in on the issue throwing jabs at Bancor that it is nothing more than a centralized entity.

What we came to realize is that $12.5 million worth of BNT tokens were stolen from Bancor and not that the blockchain was compromised. Apparently, hackers exploited a weakness of one wallet used to upgrade smart contracts and withdrew ETH.

As Charlie Lee is reviewing Bancor hacks, his own coin is facing the wrath of sellers. In the last day alone, LTC is down 10 percent meaning sellers should trade with the trend and short with targets at $50. Before then, it’s would be better to trade a break out and that means selling once prices break below $70, our main support line. Ideal stops would be at $80. 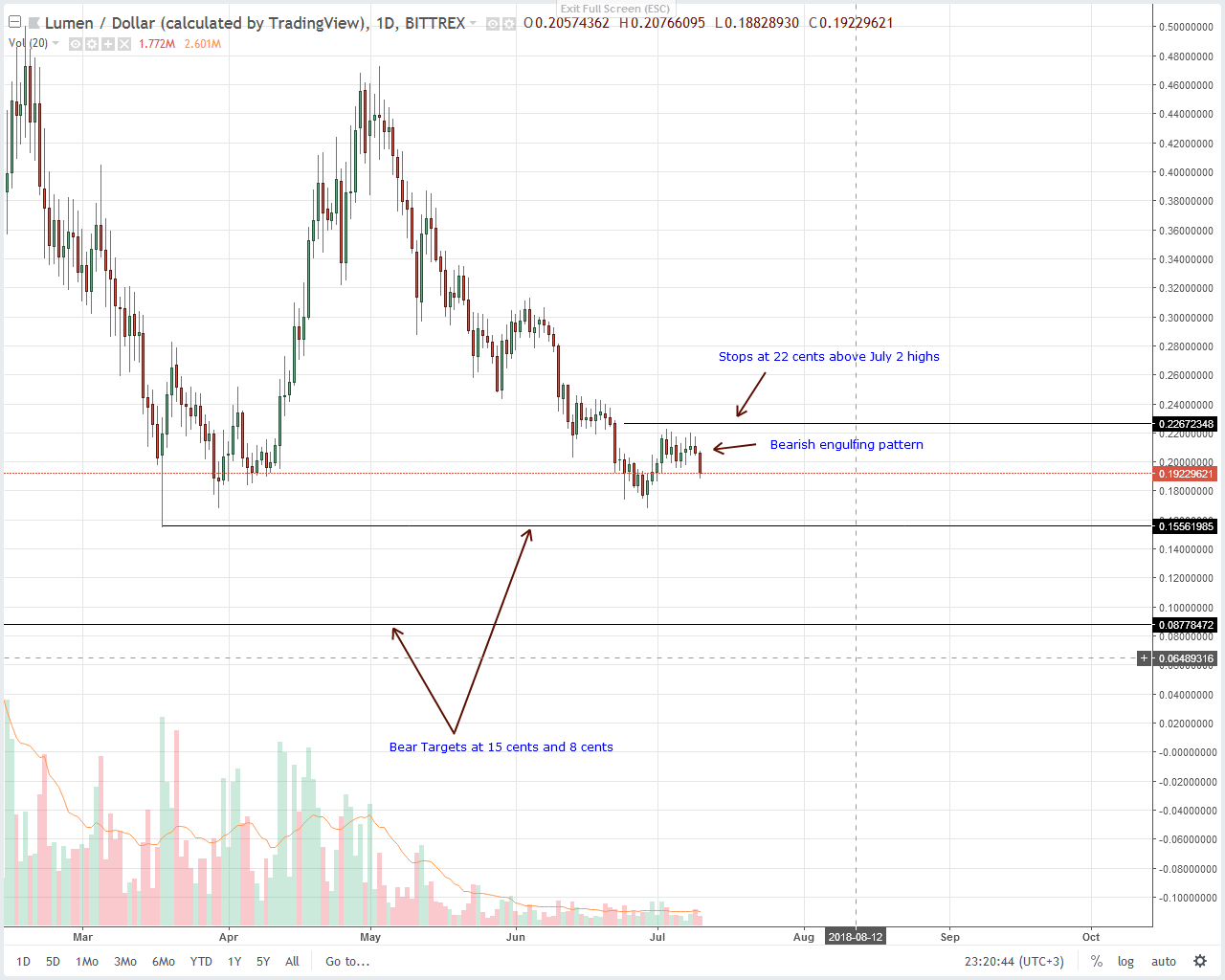 Like other coins, XLM is also on a losing trend and so far, it’s down  10 percent and trading below July 2 lows at 18 cents following yesterday’s bearish engulfing pattern. Because of that, my suggestion is to short on every retracement today with stops at 23 cents and targets at 15 cents and later 8 cents as laid out before. 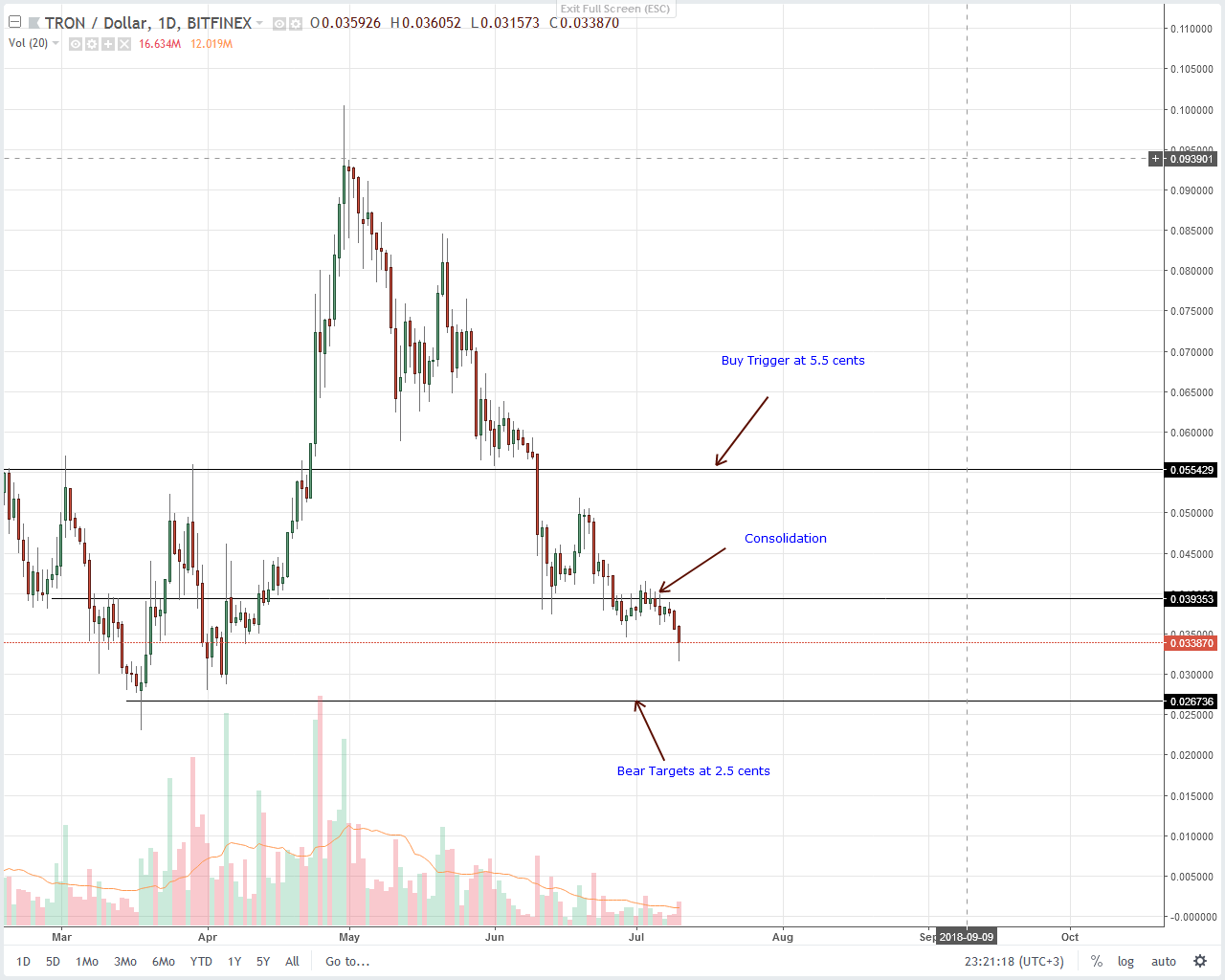 As the market bleeds, Tron (TRX) holders can smile especially if they had their coin at Binance. Withdrawals are now possible after three weeks or so of withdrawal suspension due to maintenance. While at it, SR election is in progress and holders can now vote for their favorite SR from the more than 50 candidates who have lined up.

? Want to keep up with the latest Super Representatives updates? Visit our new Explorer https://t.co/t8LzYz2QQx and click on Open team page ? Already more than 20 #TRONSR candidates have listed!

On the charts, TRX is down 11 percent and keeping up with losses in other coins. Because of this, our trade plan is still valid and my recommendation is to short on every high with stops at 3.5 cents and bear targets at 2.5 cents. 2.5 cents is a level of main support and is a key support line for Tron which might after all slow down sellers. 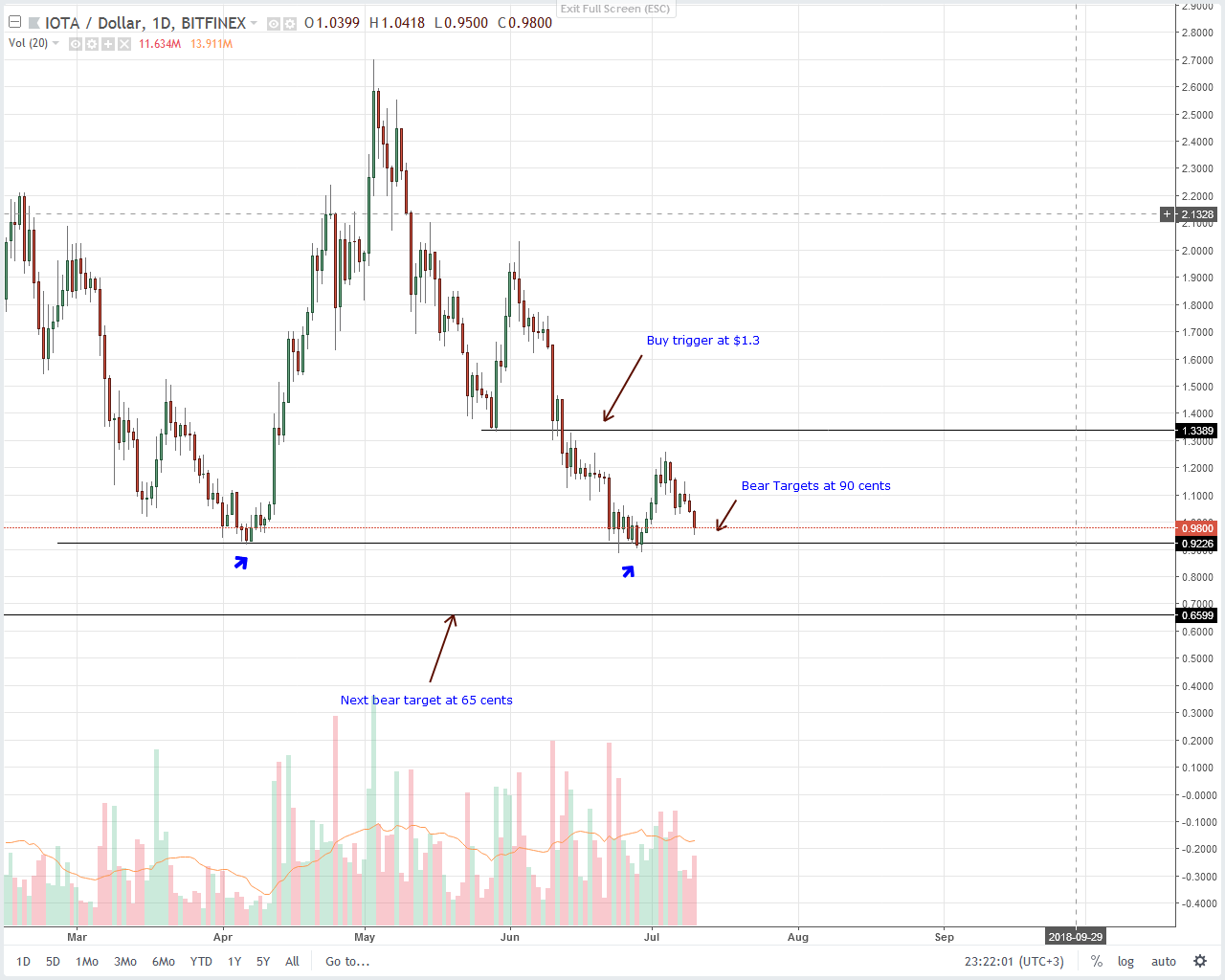 After that Stitching attack on July 6, IOTA is yet to recover. Fact is, it is down 11 percent in the last day and sellers are now in sync with the general trend as they retest 2018 lows at 90 cents. Well, because of the last two days price action, our bullish plans are now invalid.

Currently the confirmed transaction ratio in iota is practically 0 because someone is stitching the side tangle to the main tangle and this apparently breaks regular nodes ability to select tips.

My trade plan would be simple: wait for prices to break below 90 cents and short on every correction with stops at $1. Ideal bear targets would be at 65 cents, the next level of support.