Regardless, Charlie Lee Bitcoin shill and consequence resurgence isn’t affecting Litecoin (LTC) in any way. Yes, there were occasions-for example July 24 bull candlestick that solidified our expectations. However, the fact that Litecoin (LTC) bull trails are going cold, it’s better to wait on the sidelines until after we see convincing gains above $90 in line with our previous Litecoin trade plans.

There is nothing that fast tracks the success of any product-cryptocurrency or otherwise, than mass adoption. It all has to do with the network effect and the velocity in which users find value in a product. In our case, the Litecoin Foundation and Charlie Lee have been successful on making Litecoin a household name. In fact Litecoin is slowing becoming a perfect alternative for Bitcoin when it acts as a medium of exchange.

As the outcome of their strong social media campaign shows, the Litecoin Foundation has managed to convince several high level businesses and merchants to accept LTC as one of the many payment method. Straight from Cheap-Air to seven NASDAQ companies, LTC is undoubtedly finding a footing amongst merchants and it could even accelerate with development of Flexa.

Flexa describes itself as a “one-tap” mobile payment app that allow users to execute micro-transactions without having to route their payments through banks or card providers. With Flexa, one can simply load up the card with Litecoin, Bitcoin, ETH and BCH. The cool thing is that there is even no need to worry about the security of private keys as the app is secure.

Once loading happen, they can pay for service or merchandise using Litecoin or a combination of different cryptocurrencies at 35,000 merchants spread across the globe. 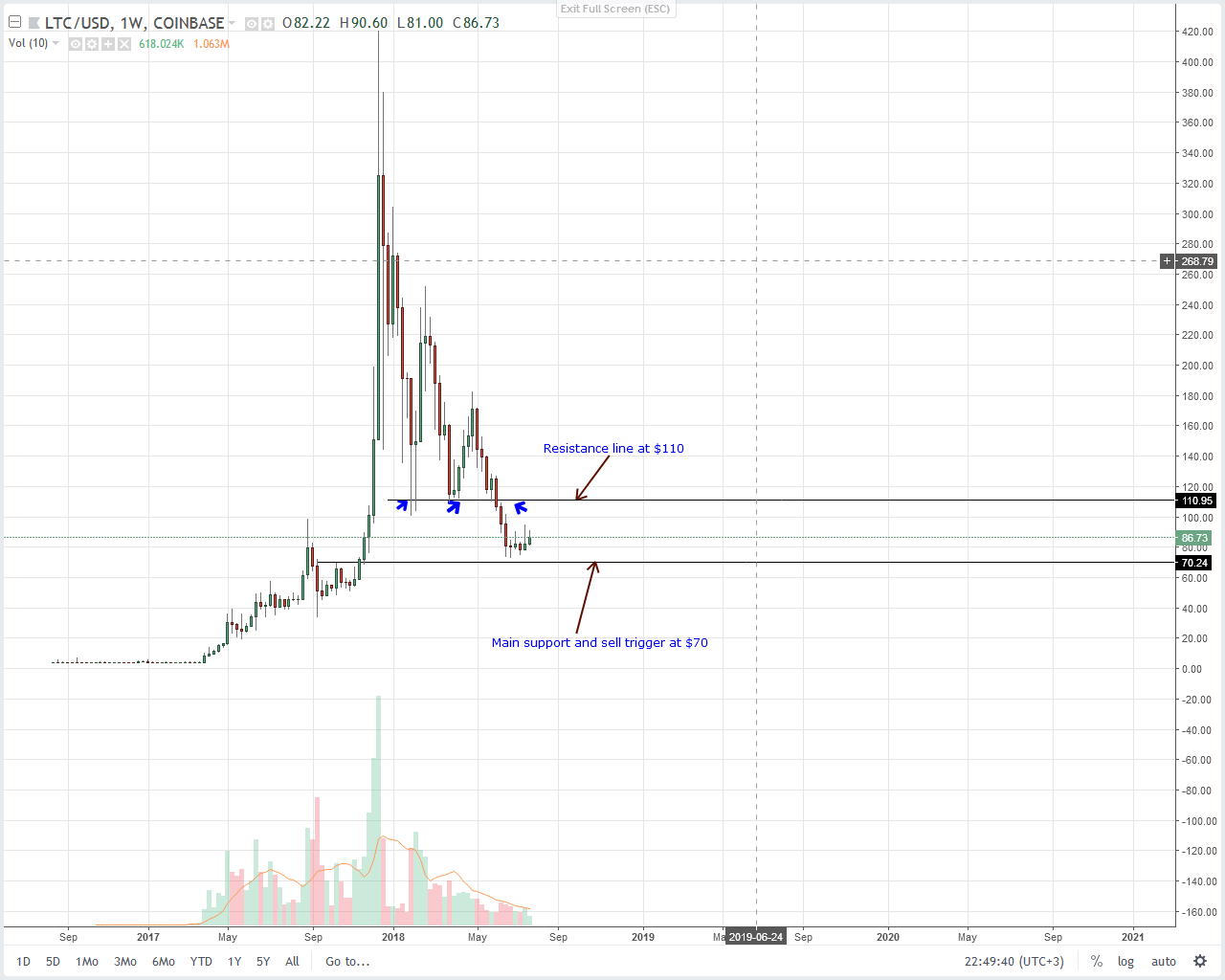 Technically, Litecoin (LTC) prices are in consolidation in a deep bear trend. And even while they move within this $20 trade range, LTC buyers are yet to break and close above week ending June 24 highs. Basically, what this means is that Litecoin (LTC) bulls are still confined within a climactic bear candlestick. By extension, sellers still overshadows Litecoin.

Even though there are chances of further appreciation just because the overall market sentiment is upbeat and Bitcoin is testing new highs, we need to see strong gains that would completely reverse week ending June 24 bear candlestick. That way we shall have a nice three bar reversal pattern-the Morning Star and increase our prospects of buys. Otherwise bears would still be overshadowing our Litecoin bullish expectations. 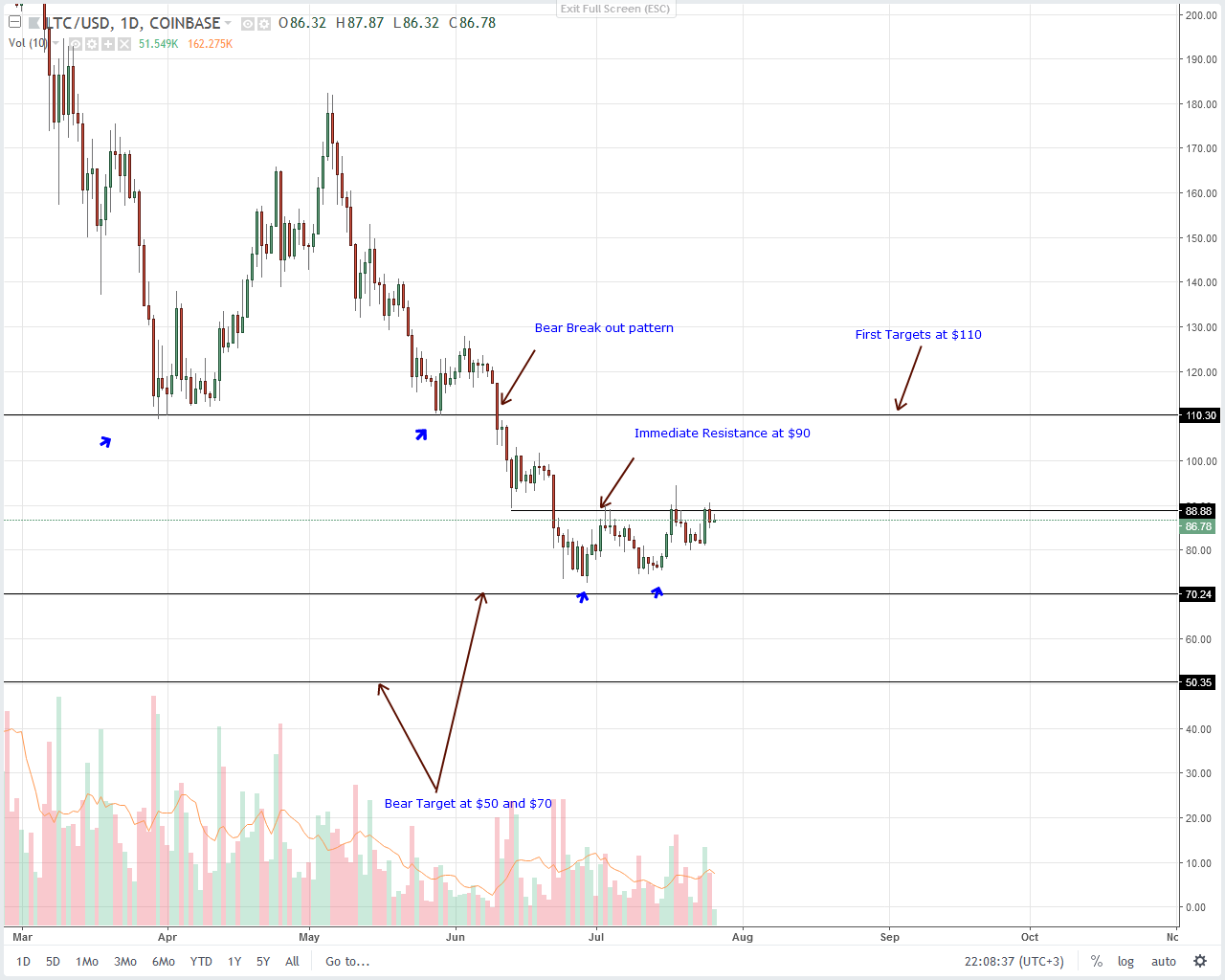 Like we said before, here we can see Litecoin (LTC) price action moving within a tight $20 range. Immediate resistance is at $90. While we are generally upbeat expecting gains because of the Litecoin-Bitcoin positive correlation, we need to see strong volume break outs above $90. That will hopefully trigger the next wave of Litecoin pressure retesting $110, our immediate resistance line.

On the flip side, sells below $70 would effectively water down our bullish expectations. That mean sellers would enter short on every pull back with eyes on $50 as laid out before.Before either of that happens, taking a neutral approach would be profitable. Nevertheless, odds are Litecoin bulls would edge higher and confirm July 24 price surge.