Perhaps a stand out is IOTA which despite news of IOTA Hub, addition of new personnel together and prospects of Qubic continues to dump down. Week over week, IOTA is down 18 percent and trending below 2018 lows. Others as EOS, Litecoin and Stellar Lumens are stable with the later finding support at 22 cents but still oscillating within Aug 4 bears. 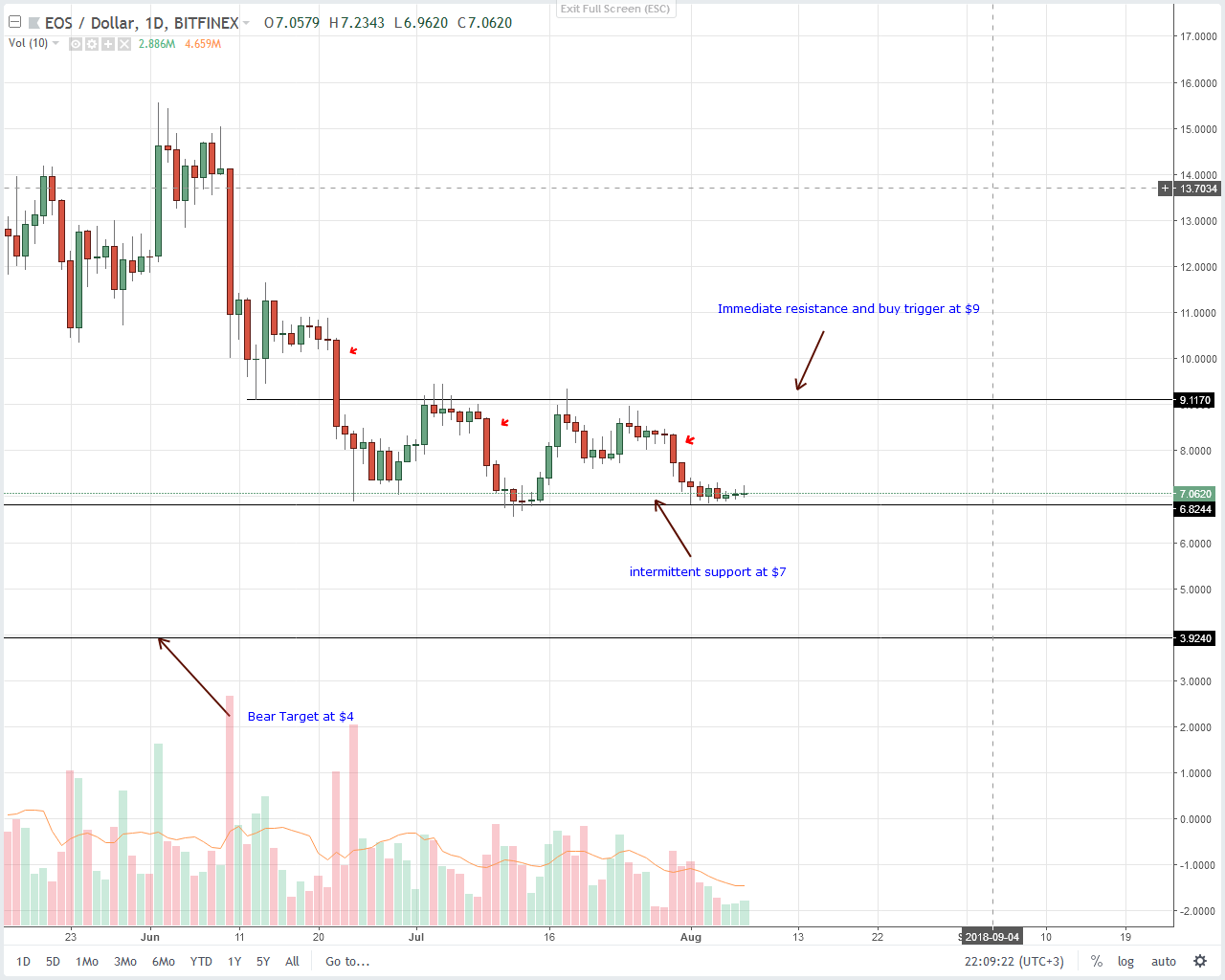 Relative to other altcoins, EOS prices are finding support around $7. However, they are still down five percent down in the last week. That’s lower than the ball park eight percent losses registered by most coins in the top 10. From the charts, we can see why.

Not only are prices rejecting lower lows and bouncing off support, the past three candlesticks did close higher. While they are yet to breach $7.5 or July 31 highs, this is a tinge of positivity the market needs.

However, all things constant, we retain a bearish inclination. As such, every high retesting $7.5 or higher provides another selling opportunity in line with last week’s bears.

Conservatives on the other hand should wait for conclusive close below $7 before initiating trades with targets laid out in previous EOS trade plans. 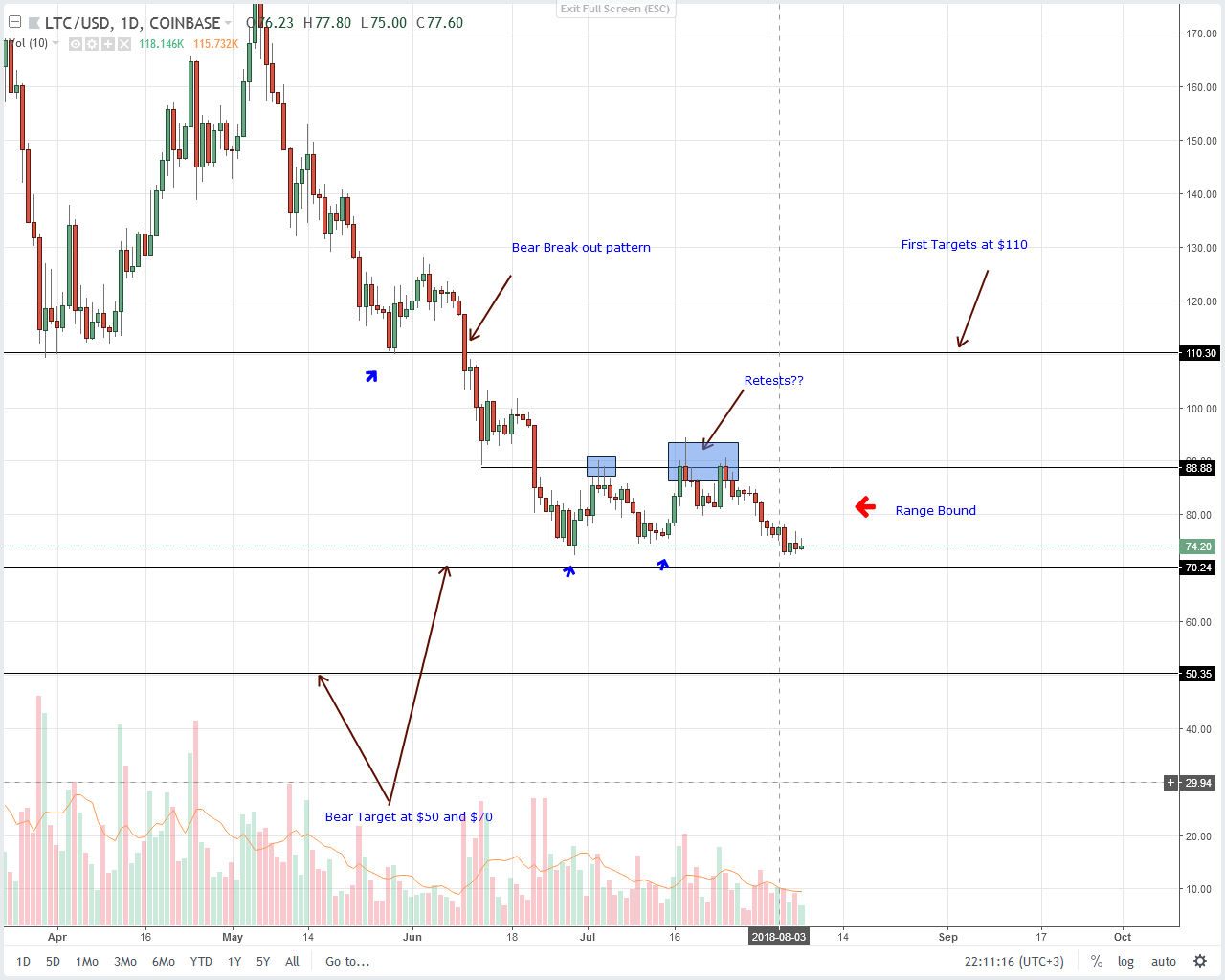 Still perched at position seven in the liquidity table, Litecoin (LTC) is tad bit stable but down seven percent for the week.

As a matter of fact, LTC is confined within Aug 4 high lows and that’s normal especially after such high volume, wide trading range price changes. But, this doesn’t mean buyers are in charge.

Instead, risk off traders syncing with the overall trend can unload at every retest of Aug 4 highs at around $80 with first targets at $70 and later $50 as spelled out in our Litecoin (LTC) trade plan.

Remember, prices are still moving inside a $20 trade range and any conclusive breaks in either direction would usher in buyers or sellers depending on the break out direction. 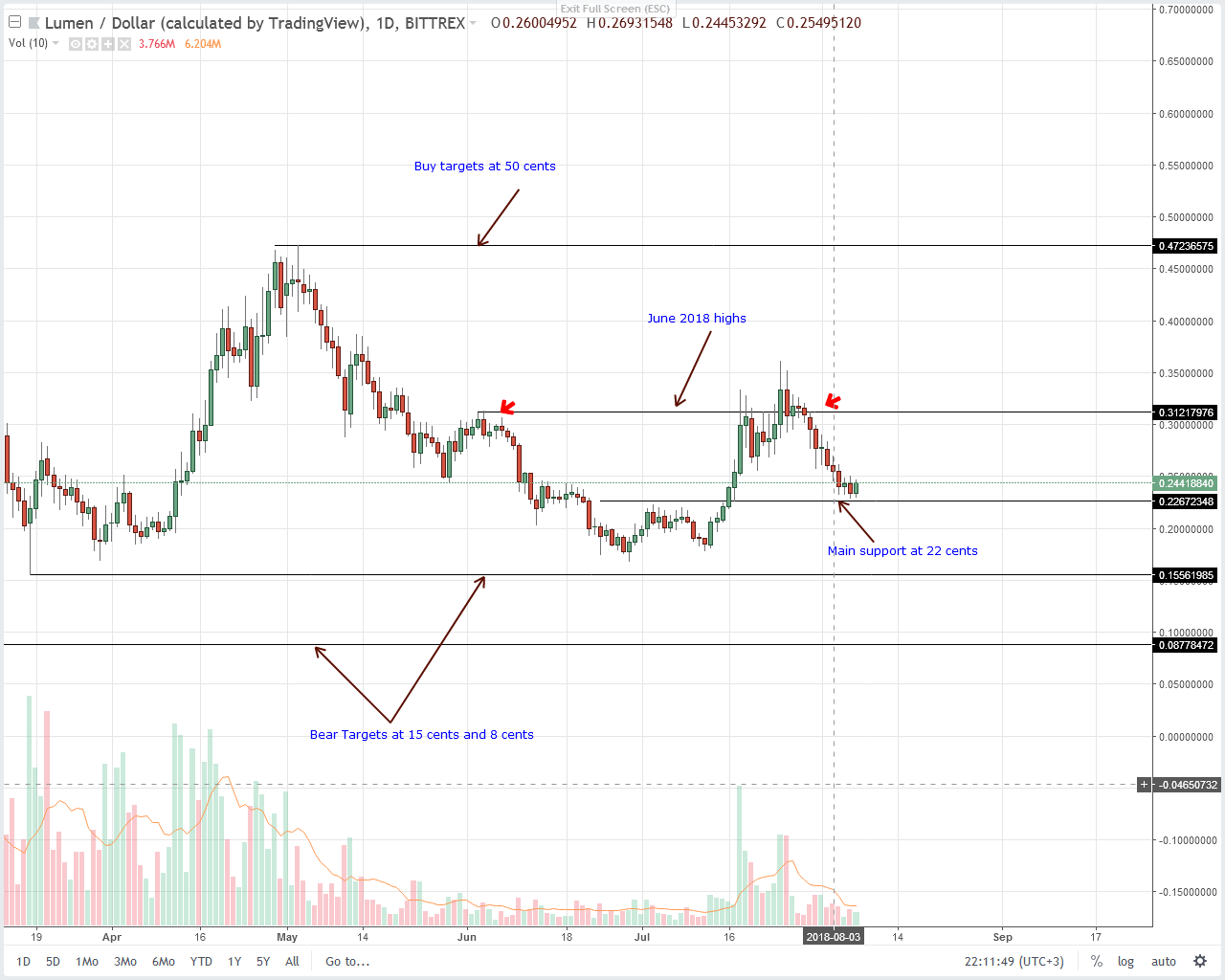 In fact as we saw, prices are up one percent but still, we have to take a top down approach and bring to light last week’s strong bearish engulfing pattern rejecting higher highs right at the main resistance trend line.

Now, from the chart, XLM buyers should edge past Aug 4 bears at 25 cents or there about before we can begin loading up on lower time frames with first targets at July highs at 35 cents. 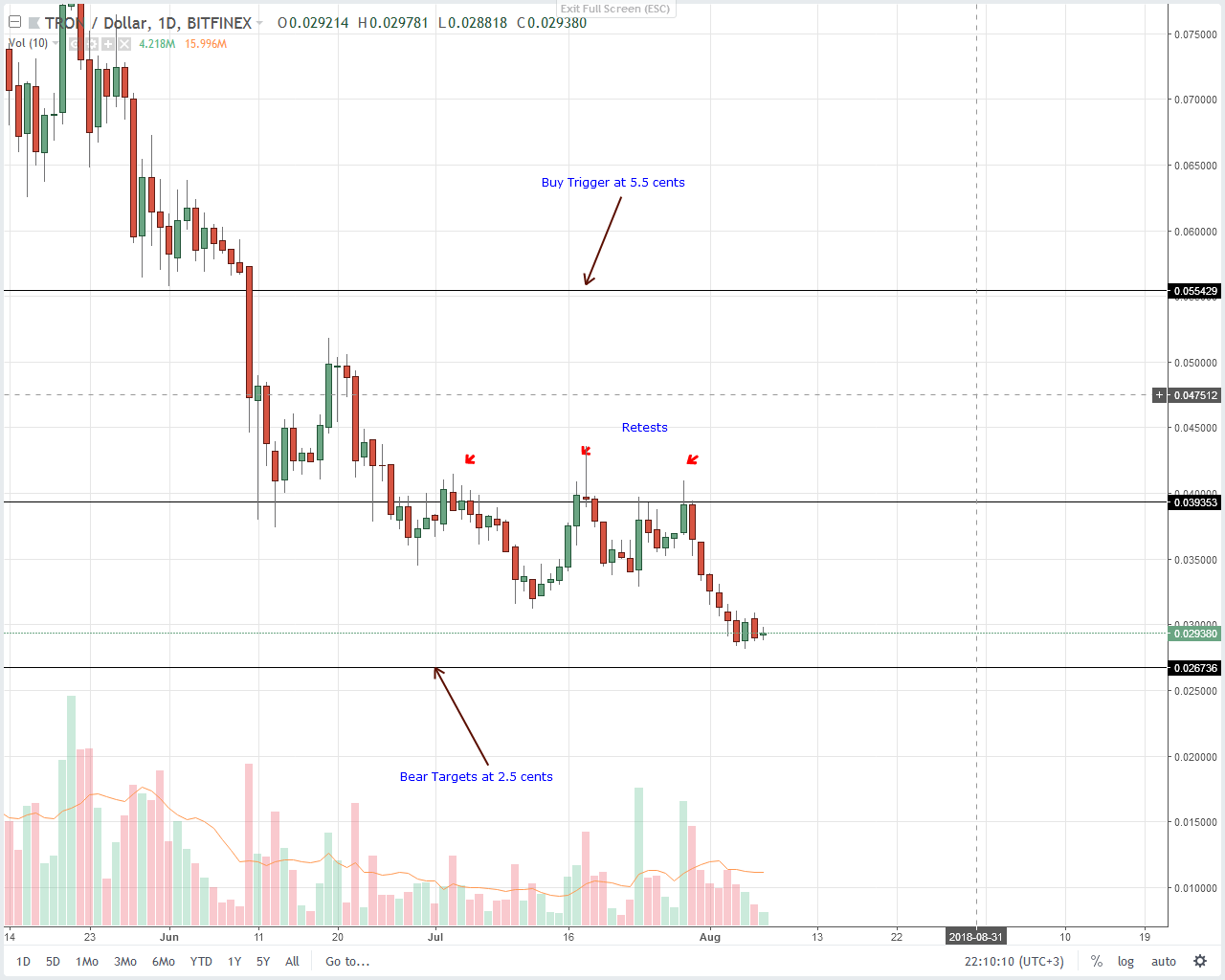 All things constant and despite Justin Sun endorsement, TRX is steadying. Though prices are in a down trend, TRX is basically trending inside Aug 4 high lows and are yet to hit our sell targets of 2.5 cents which also doubles up as our main support line.

Should TRX finds support and gain, then we need to see consistent gains and close above 3.3 cents-that’s roughly the 50 percent mark of last week’s losses. On top of that, we should see a jump in trade volumes exceeding the recent weekly averages to cement that optimistic position.

If not, we shall continue selling TRX with first targets at 2.5 cents and later 2.2 according to our overall Tron (TRX) technical analysis. 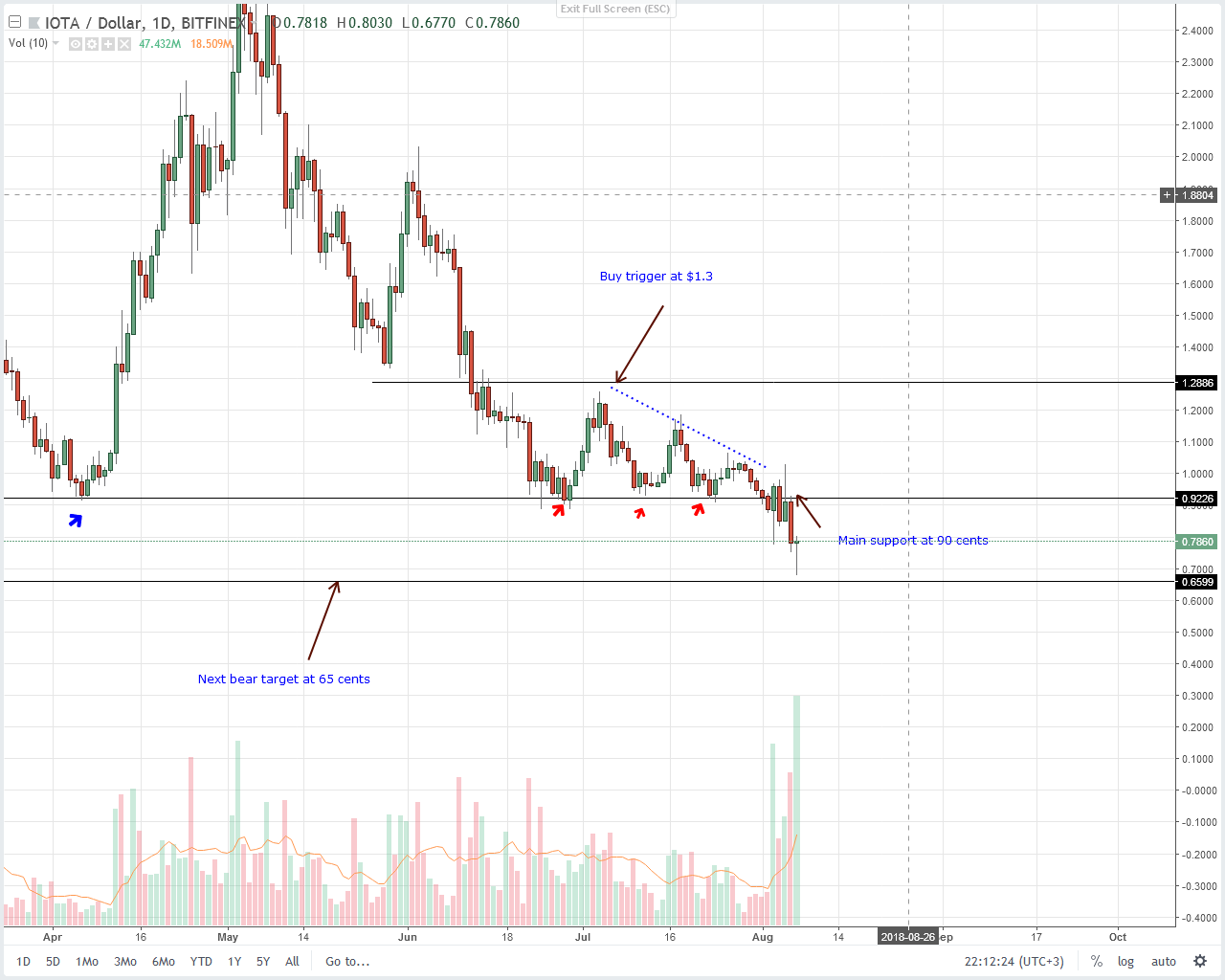 On a weekly and surprisingly on a daily basis, IOTA is down 19 percent meaning prices are now trading below the 90 cents mark.

As detailed in our last IOTA price forecast, any close below 90 cents confirms the bear break out trade pattern of June 12 and sellers can begin unloading IOTA on highs with first targets at 65 cents and later 45 cents.

Ideally, safe stops should be at 90 cents or Aug 6 highs.