Next Article: Students are Mining Bitcoin in University Dorms, Campuses are Alert

More often than not, asset prices tend to recover following periods of stretching as the last two weeks demonstrate. In our case, unless we see a recovery in Bitcoin, most coins as Litecoin or EOS for example might extend their losses. Others as Stellar Lumens might be destabilized even after Facebook denying partnership claims. All in all, we remain bearish and unless otherwise, traders should search for selling opportunities in lower time frames. 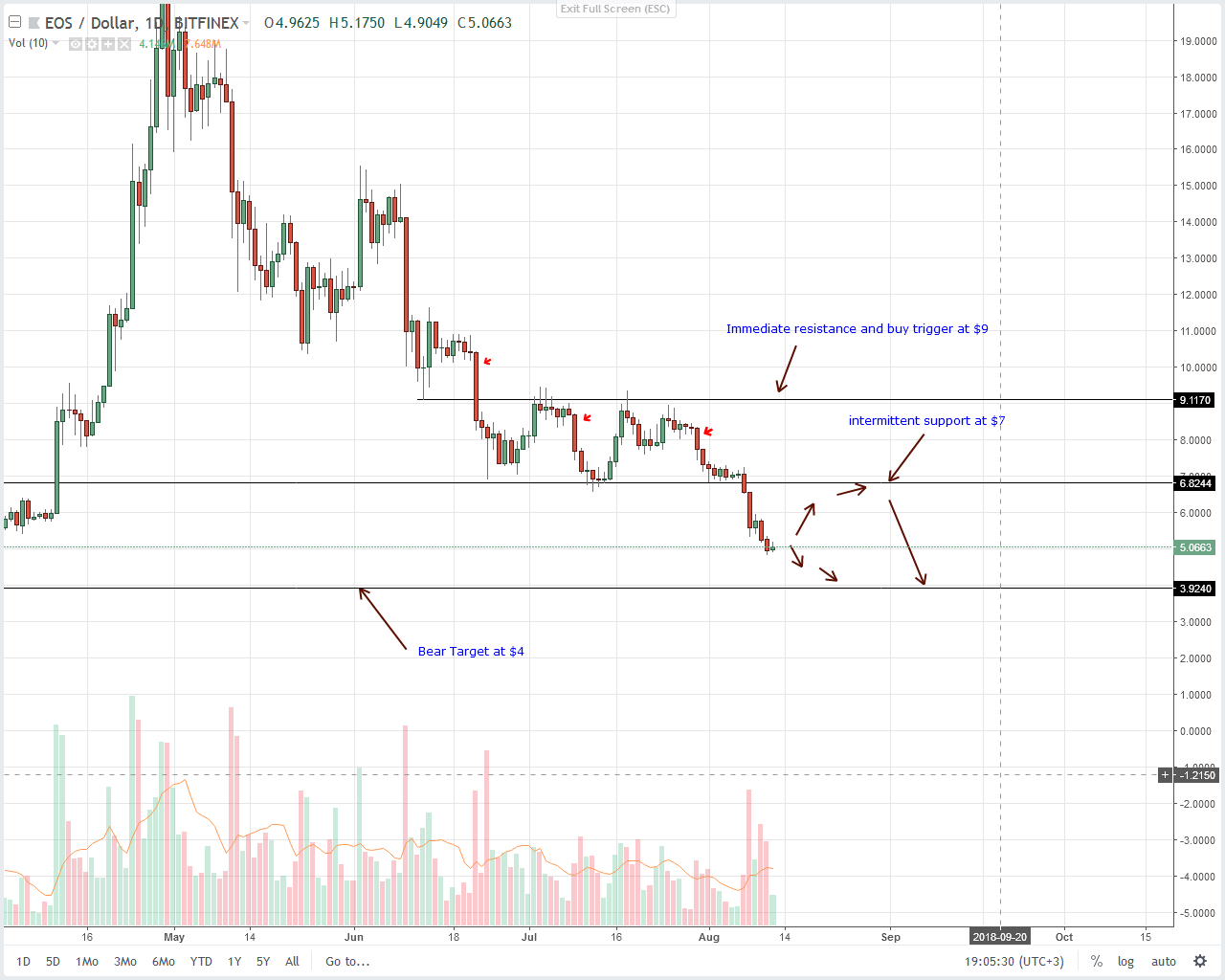 Our EOS trade plan is on course and solid. With a week over week drop about 28 percent, EOS prices are edging closer to 2018 lows and bear target at $4 following their strong break out below our intermittent support at $7 last week.

While we expect EOS to damp down their losses and even retest recent highs at $6, still sellers should always unload EOS at every high in lower time frames as laid out in our last EOS technical analysis.

If EOS buyers join in pushing prices above Aug 10 highs and $6, then we should expect to see a retest of $7 in line with the general bear break out pattern. In that case, selling opportunities would be found at retests with stops at $8 and first targets at $4. 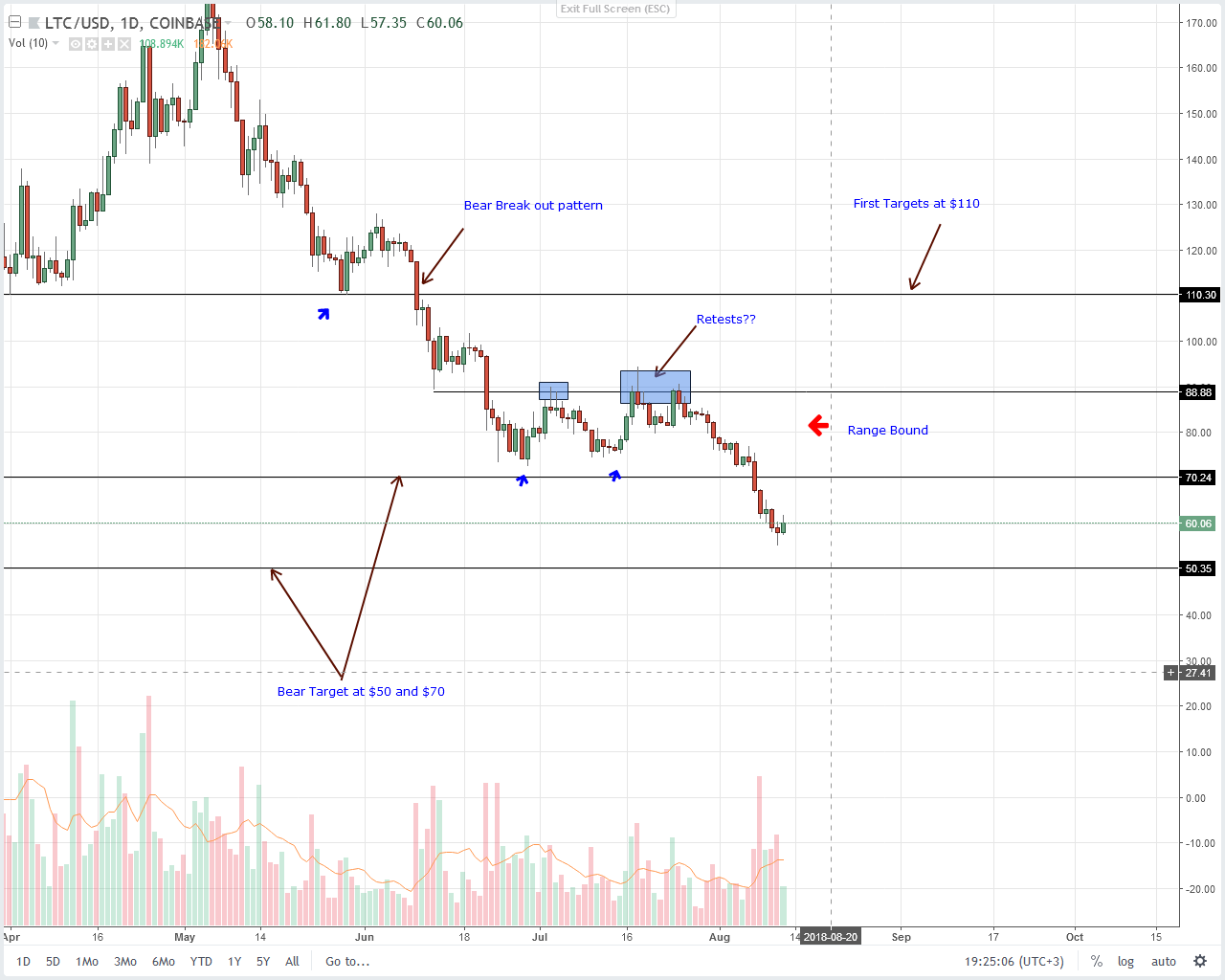 At current prices, Litecoin is $10 away from hitting our first targets at $50. There is a high probability that prices would slide towards $50 but first-and as common when prices collapse like it has been the case in the past two weeks-, we might see a slight recovery retesting immediate resistance at $70.

Notice that while yesterday was bullish, it is Aug 11 high volume bear pin bar candlestick that underpins our analysis. Volumes are high but prices didn’t move lower and instead on Aug 12, we saw higher highs meaning buyers are preparing to edge higher and that’s why I recommend staying neutral today. 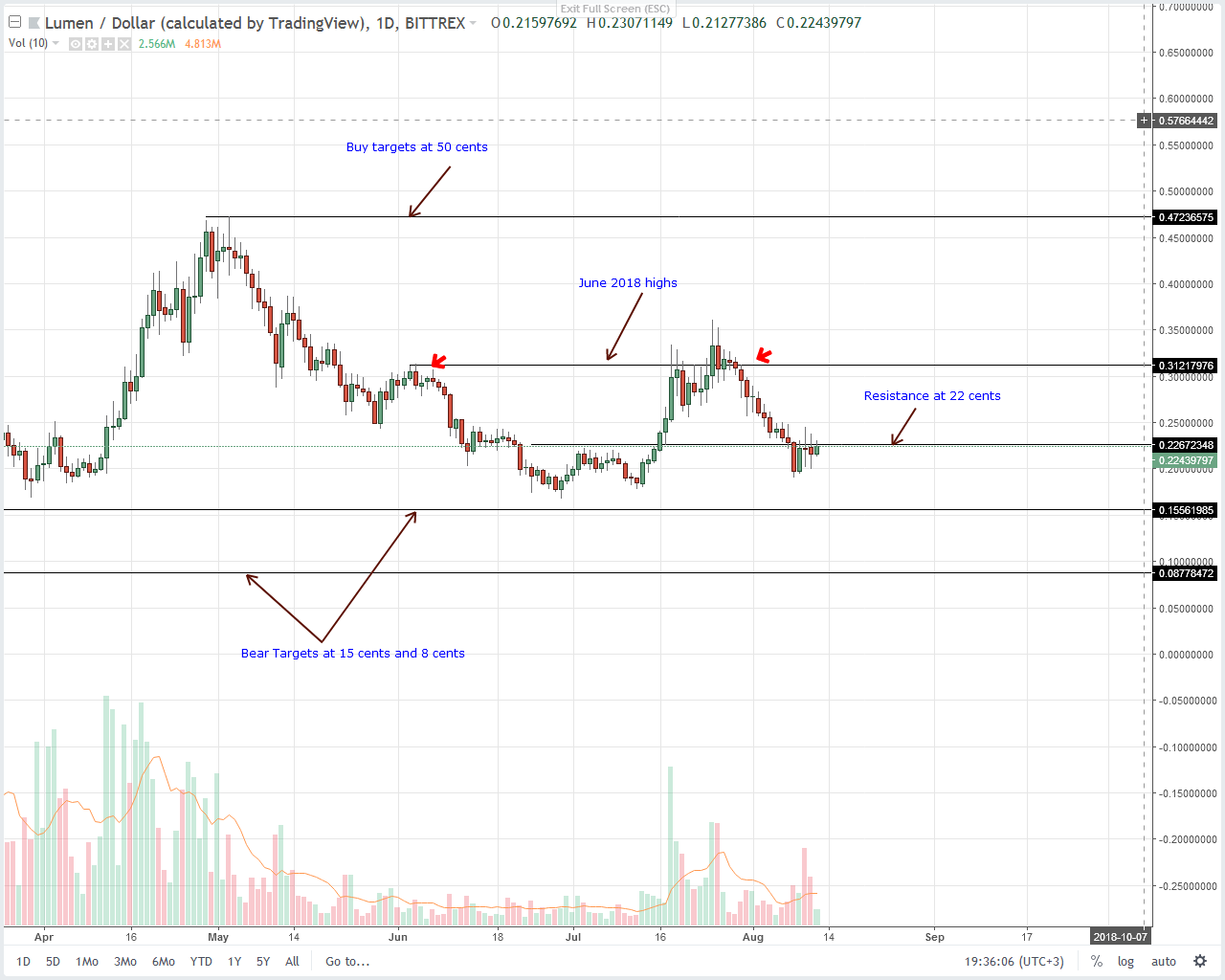 If we take the positives from those partnership rumors then we can associate that with Stellar Lumens (XLM) higher highs. But, note that despite all these, Aug 8 break out and bear candlestick still confines the last five day’s price action.

This is an automatic damp for bulls and as highlighted before, we shall take a neutral to bear approach in line with our XLM trade plan waiting for prices to close below June lows before entering shorts.

On the positive side of things, Stellar Lumens buyers would be back in contention once they close above 26 cents or Aug 4 highs.

The @Tronfoundation has acquired https://t.co/2CaiiqovO3, #TRON will decentralize the web. #TRX $TRX 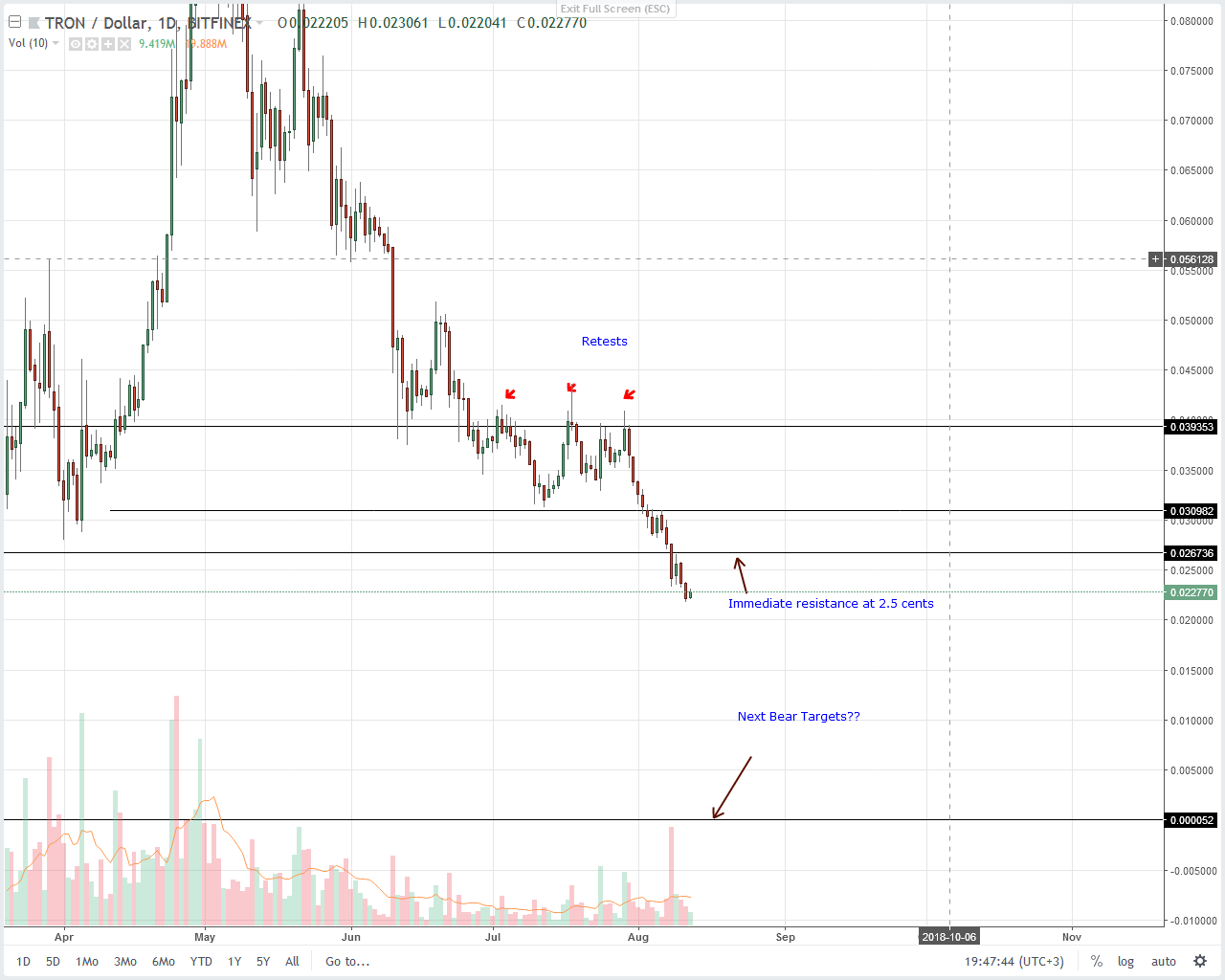 In the last day, Tron is up three percent meaning TRX ended up bullish in the midst of strong bears. Even though we remain bearish, we might see buyers building on yesterday’s higher high and retesting our first layer of resistance at 2.5 cents.

That will be nothing new –this pattern often happens after periods of high volatility—and would provide a perfect entry for sellers. Instead, they should aim for our bear targets at Jan 24 lows in line with our last Tron (TRX) technical analysis. 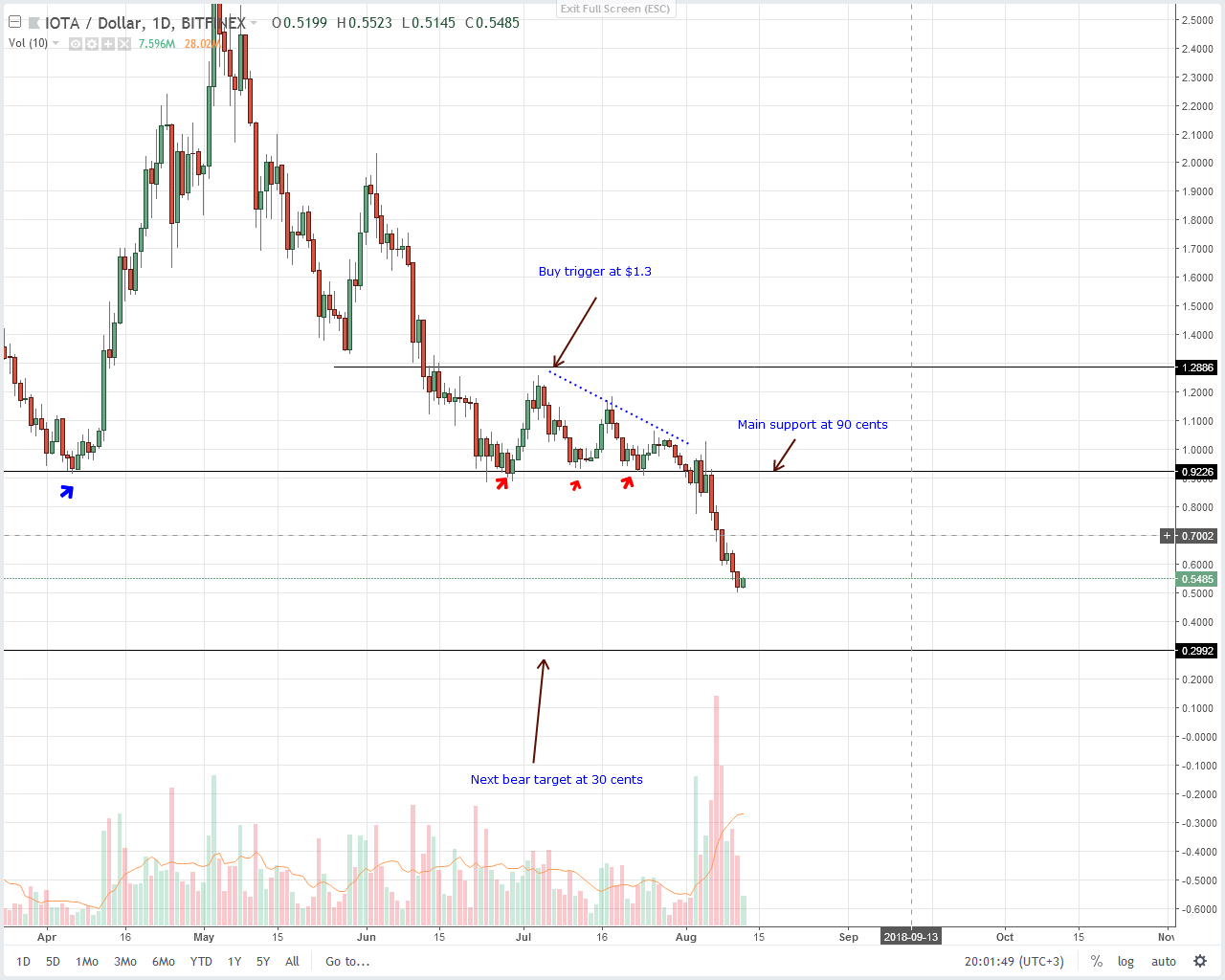 Relative to other coins in the top 10, IOTA is the worst performer shedding more than 50 percent last week alone. While it is stable in the last day gaining eight percent, that doesn’t mean buyers are back. In fact from candlestick arrangements, we are poised to see further losses this week with sellers hitting our ideal bear target at 30 cents.

Our first targets immediately after we saw a break below 90 cents was at 65 cents and that was hit on Aug 8. Should there be a recovery, then Aug 8 highs at 70 cents will act as our immediate resistance and sell zone for traders aiming to short on every pull back according to our laid out IOTA trade plan.