Regardless of this flat price action, chances are we might see a short term price recovery only if buyers drive prices above Aug 17 highs of $330 or there about. In the meantime though, Ethereum (ETH) is down two percent in the last day as the community receives with great expectation IE’s Bakkt and their effort to make crypto mainstream.

Earlier this month, International Exchange, the company which owns The New York Stock Exchange announced that they will be forming a new company Bakkt with the sole purpose of creating the lacking regulatory framework that facilitates fast price discovery as well as creating the infrastructure required for making trading, storing and spending of several high liquid cryptocurrencies as simple as possible.

We introduced Bakkt two weeks ago, and in her latest @Medium post our CEO looks ahead to an even busier fall https://t.co/T7RltAGp0k

It’s often the adoption part that is challenging when a new product is trying to break into the mainstream but once it does, it’s usually a new cycle of value creation that benefit the first investors. Bakkt consists of several traditional market leaders as Microsoft, Alan Howard, Galaxy Digital and several blockchain centric venture Capital firms and as they plan to launch on November this year, the group is receiving overwhelming support from the crypto community with some comparing their effort to those of early drivers of internet adoption as ICANN.

1. Today I am going to make a tweet storm explaining the history and state of Ethereum's Casper research, including the FFG vs CBC wars, the hybrid => full switch, the role of randomness, mechanism design issues, and more.

In a bid to quash rumors that has been in the crypto world, Vitalik took to twitter explaining the genesis and objectives of Casper Labs, how the network plans to deal with long range attacks and how Friendly Finality Gadget (FFG) had better inbuilt designs that complies with other blockchains that adds finality guarantees. 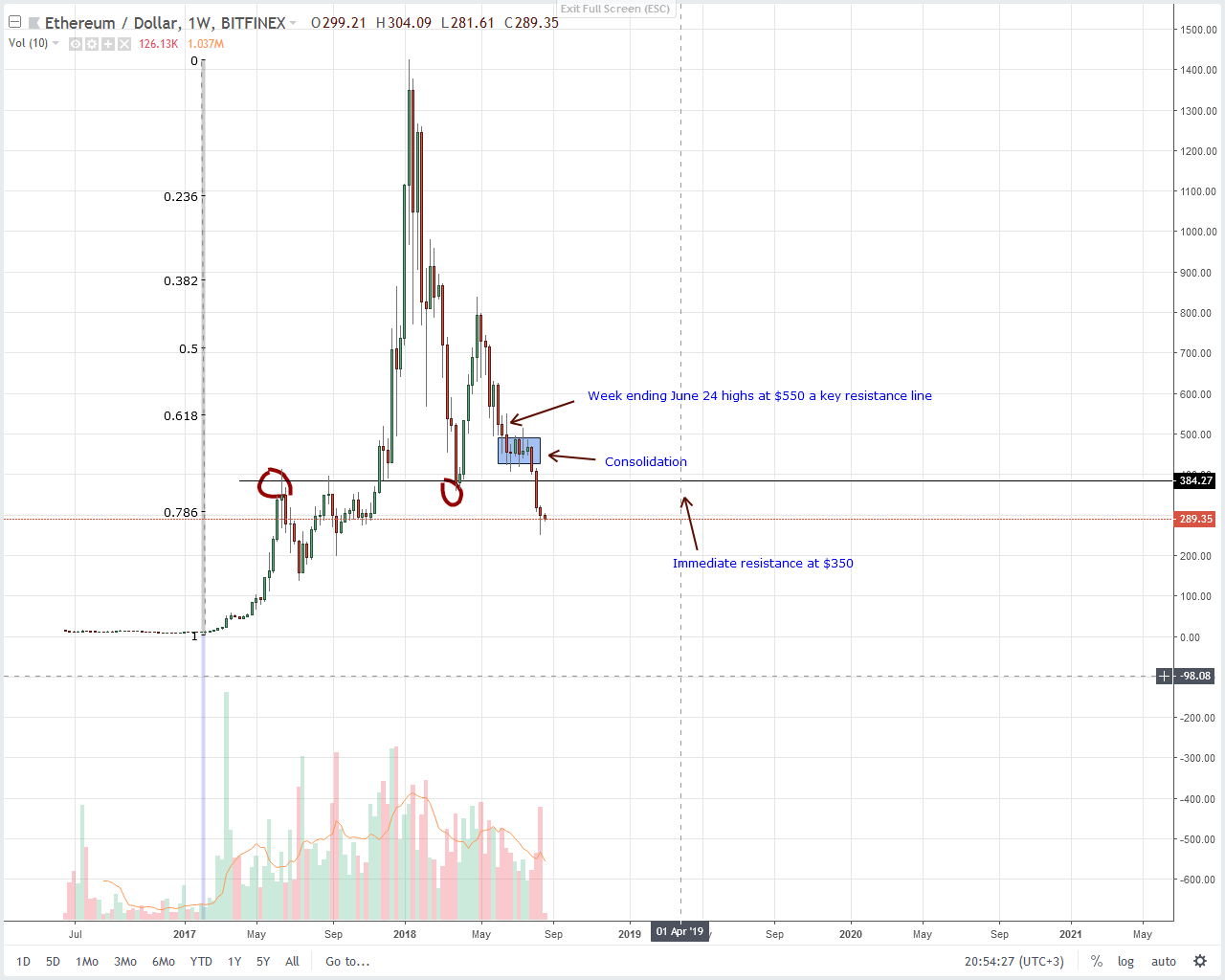 Price wise, bears are in charge and after shedding four percent in the last week, it appears as if Ethereum sellers are syncing well with that break below pattern of week ending Aug 12.

Notice that that bearish engulfing candlestick anchors our current price projection and as per our previous Ethereum (ETH) trade plans, sellers are in charge and despite recent attempts of higher highs, it will be a tall order for buyers to muster enough momentum and print prices above $400.

In any case, last week’s bear candlestick confirms the break out pattern and as long as prices are not trading below last week’s highs at $330, we suggest taking shorts on every high in lower time frames. 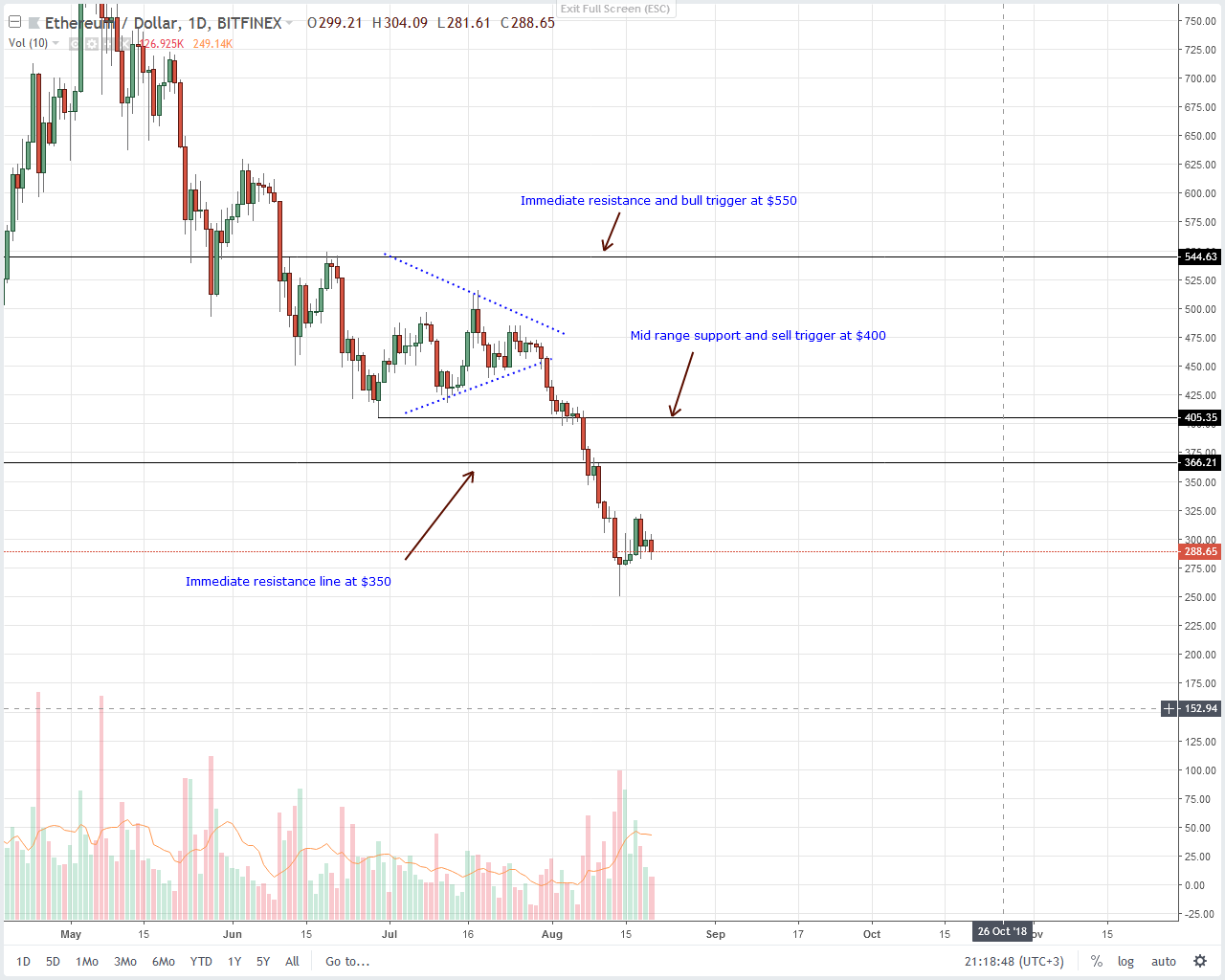 Though we had a convincing three bar reversal pattern by close of Aug 17 that bull reversal pattern is yet to be confirmed and in real sense prices are oscillating within Aug 17 bullish engulfing high lows.

Technically, we shall retain a bearish projection a long as prices are trading below $400 and as it stands, today close shall define our short term trade trajectory.

If today’s candlestick close as a bear, then we shall take shorts from tomorrow with stops at $300 and first targets at $200.

However, should bulls drive prices higher then we recommend taking small size longs with stops at $280 and first targets at $400.