After all, Bitcoin is on the verge of a new revival that may bolster prices and hopefully propel them above week ending Aug 12 highs-the all important level $7,200. Technically it’s a tall order gauging by the way Bitcoin buyers are struggling to build momentum that would thrust and sustain them above $7,000—a conservative buy trigger line. On the fundamental lane, sentiment is finally shifting. Sooner-and it’s already in motion, more shorts would exit as buyers enter the market padding the foundation for the next wave of longs.

To say the Bitcoin and altcoin markets have been turbulent is an understatement considering accompanying metrics. Even as bears slow down, the market has been a bleeding ground for crypto investors. But like every other asset, Bitcoin and most digital assets are near historical reversal zones after shedding more than 80 percent from their recent peaks.

This phenomenon has been on replay since Bitcoin and other high liquid cryptocurrencies as XRP became the center of media attention back in 2011 and shortly after the Chinese pump when Bitcoin prices shot 1000 percent.

Nevertheless, when we zoom in and check the markets from a bird-eye’s view, there are more positives to take and today let’s highlight some recent announcements or developments ready to thrust Bitcoin prices above $7,000, our main resistance and bull trigger line. Remember, prices are less than $300 away from retesting this level for the third time in three months.

First, most investors think Bitcoin is bottoming out and for good reasons. In recent weeks, prices have been hovering and rejecting prices below $5,800, our sell trigger line. Accompanying this upbeat stance is Bob Lee, a market influencer and a relation of Charlie Lee, the Litecoin’s founder. Citing experience, increasing hash power and instinct, he thinks prices will hit $60,000 by the end of the year.

Secondly, political developments could further legitimize Bitcoin and similar coins. News is, Iran’s National Cyberspace Center has a draft of the country’s state backed cryptocurrency with project instructions trickling in straight from authority, Iran’s president Iran Hassan Rouhani. Whether this will be a ploy to circumvent US sanctions and provide a way out for a censorship resistant cryptocurrency for their citizens currently holding mud, we are not yet sure. 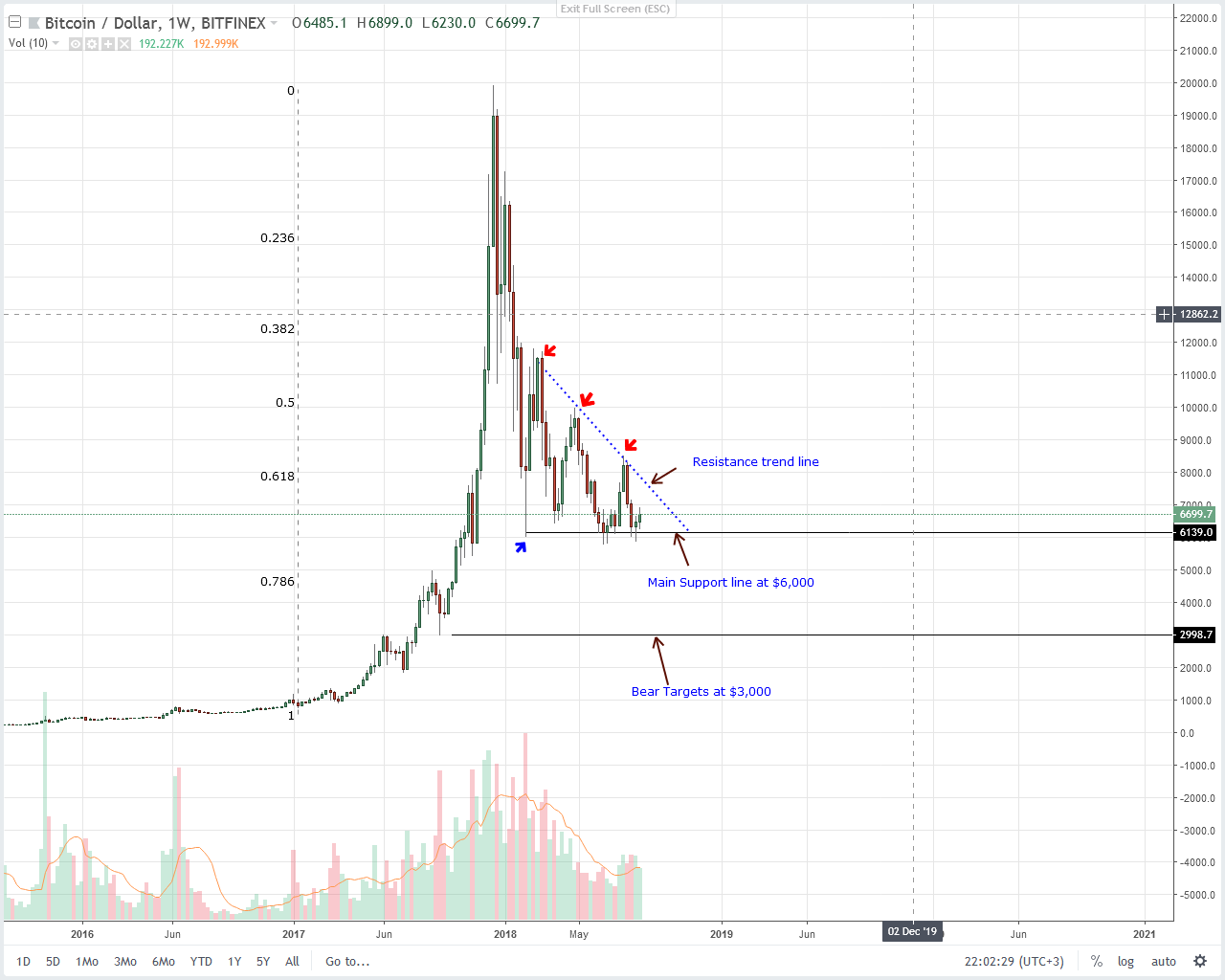 Like before, our stand remains the same. Yes we have these nice recoveries from a top down approach and encouragingly, Bitcoin prices did end on a high gaining a cool five percent in the last week.

Surprisingly, it is the only crypto in the top 10 registering gains—and that is odd but as a leading coin, it means there is some sort of undervaluation in the alt coin markets.

So, considering how the market is panning out, our last Bitcoin technical analysis is solid. Currently, trades are on freeze mode. We shall thaw and enter the markets either once gains are above $7,000 or bears resume sells pushing BTC below $5,800. 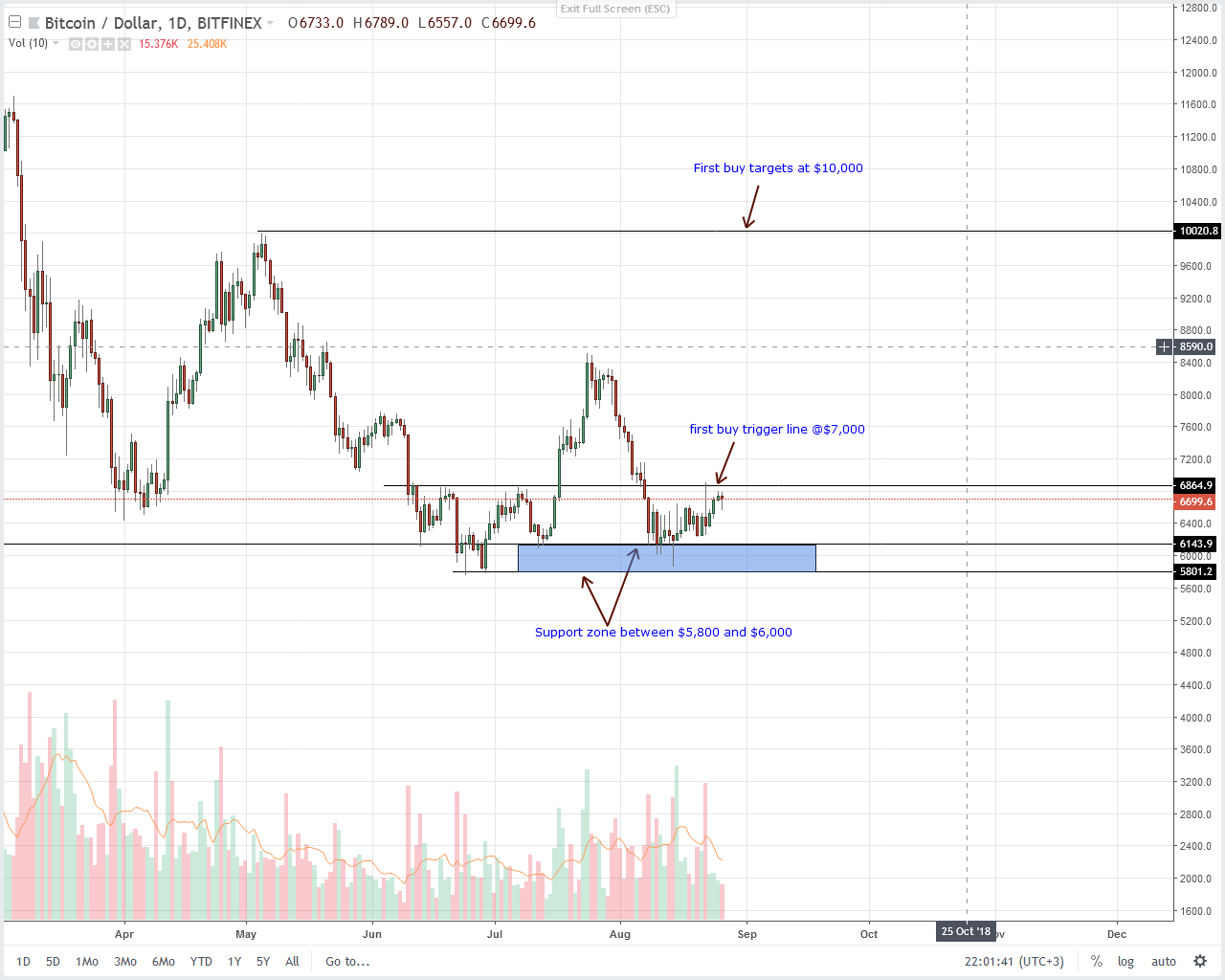 The five percent gain from a week over week basis is clear in the daily chart. When we take the optimistic lane, then chances are bulls might build on last week’s momentum and thrust above $7,000.

It will be proper if buyers do close above $7,000. This shall provide the necessary impetus to reverse week ending Aug 12 bear engulfing candlestick.

On the negative side, we might end up with a nice head and shoulder pattern. That’s especially if sellers follow through on yesterday’s long lower wick bear candlestick. Either way, let’s see how the market pans and until our conditions are met, we shall take a neutral stand.