Over the past week, as the crypto market began its slow move upwards, volume saw a resurgence, with the daily volume posted by exchanges rising from an average of $10 billion to $12 billion. Although some investors saw the rising volume as an evident sign of the return of retail interest, some pundits claimed that it may not be cut and dried.

It goes without saying that markets can often be erratic on a day-to-day basis, but the unpredictability and volatility in the crypto market are unprecedented. Keeping this in mind, when investors saw an abnormal influx of volume on South Korea’s Bithumb exchange each and every day over the past week, there were suspicions, to say the least. Cynics chalked it up to classic manipulation, while others noted that it could just be an odd API error.

But Alex Kruger, an Argentinian crypto trader and analyst, took to Twitter on Sunday to reveal that that something sinister was afoot. The analyst first posted the following image, which outlines the daily occurrence of extremely pronounced volume candles at 11:00 AM (KST) sharp. 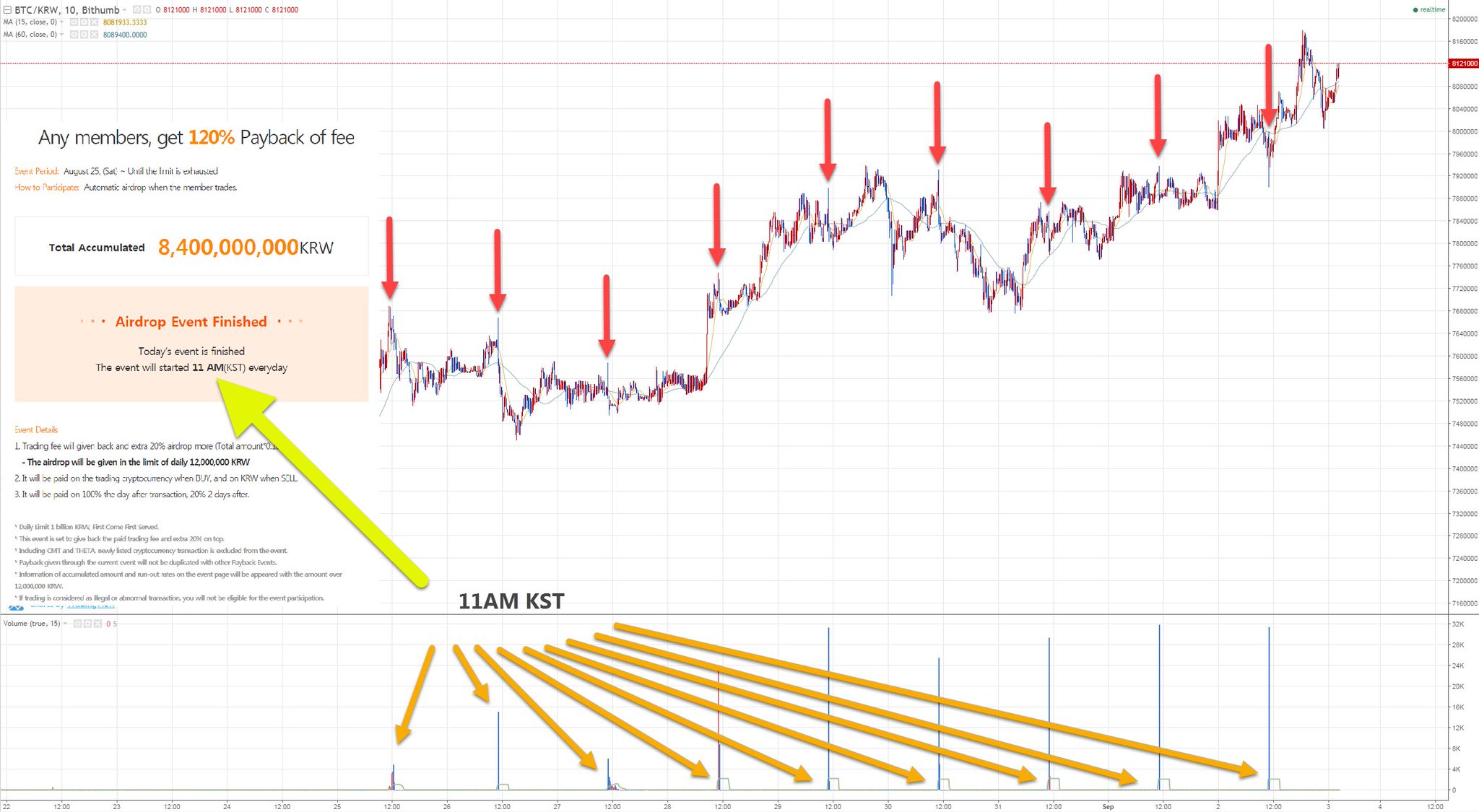 He later issued a “tweetstorm” regarding the image (seen above) in a bid to bring more clarity to the situation. Opening the thread, the commentator highlighted Bithumb’s “airdrop”, noting how the event, which was ostensibly created in goodwill, directly caused over $250 million in “fake volume” to be traded every day since August 25th.

1/ There currently are USD 250 million of fake volume traded at Korean crypto exchange Bithumb, every day at 11AM Korean Time, since August/25. Tweetstorm covers the math behind it in simple terms. #washtrading illustrated.

Kruger then dove into the statistics that backed his claim. First off, the analyst highlighted Bithumb’s airdrop system, writing:

Crunching the numbers, Kruger then added that for traders to claim the full $900,000 rebate, a single trader (or group of traders) will have to incur over 279 billion KRW ($250 million) of volume in a single day.

As this is a “first come, first served” system, it was made clear that some traders decided to game the system by manufacturing over $250 million in wash volumes in minutes to claim the full trading fee airdrop, as corroborated by the 31,000 BTC volume candles seen on the image above. After subtracting trading fees, those who partake in the wash trading scheme will reportedly rake in over $150,000 each and every day, or until the promotional airdrop ends that is. As Kruger puts it “(that is an) expensive marketing campaign.”

As it stands, Bithumb has not commented on the situation, but it seems that the Korean firm initiated this airdrop with no malicious intent but clearly left a loophole for wash traders to exploit.

However, some claim that the exchange made this move to regain popularity within cryptocurrency circles as it reopens account registrations. As reported by NewsBTC just days ago, Bithumb has just partnered with Nonghyup Bank to reinstate its account registration procedure that was shut down in January due to regulatory scrutiny.

Analysts expect that Bithumb reopening its doors to the Korean public may result in an influx of capital, as the thousands of sidelined individuals will finally be able to inject fiat into the shaky cryptocurrency market.