Perhaps the community is coming to terms with the effect of Sep 1 heavy BTC shorts and the reactivation of a dormant BTC wallet which surprisingly begun unloading BTC for fiat at different exchanges shortly after. Whether we can link that to yesterday’s clip of BTC bull wings or not, it’s clear that altcoins are suffering. There is a magnification of their losses with Tron (TRX) and IOTA (IOT) posting an average 13 percent loss in the last day alone. 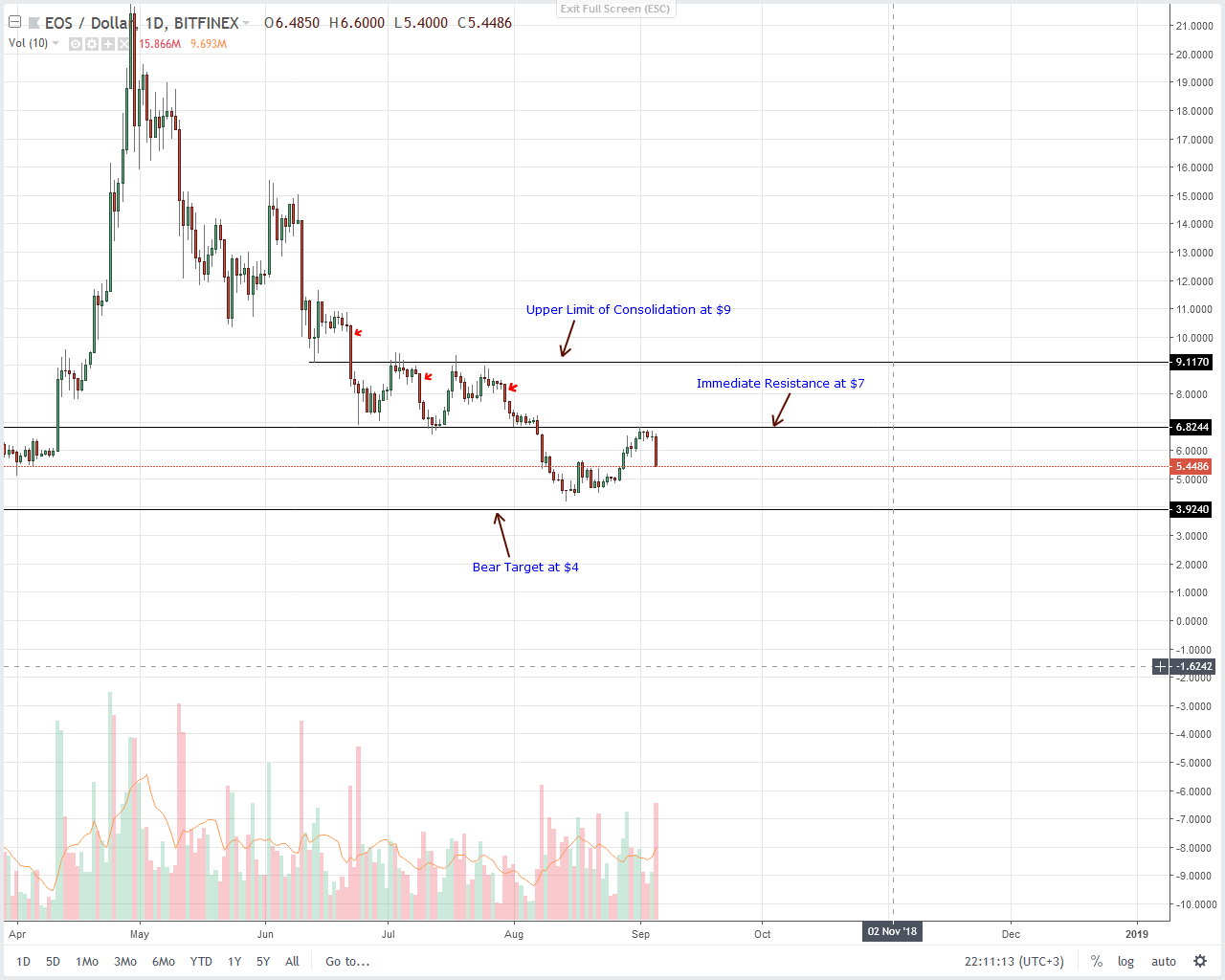 In what could be definitive for EOS throughout this year, there was an astounding rejection of higher highs at our immediate resistance line at $7.

That 17 percent dip right from around $7 is but a solid confirmation of sellers intention and a signal for traders to exit their former buy traders set in motion by buy efforts shortly after prices broke above Aug 17 highs.

If anything, EOS sellers are back and yesterday’s price collapse is but a perfect signal for traders to initiate shorts at current prices with first targets at $4. This is all due to yesterday’s high volume bar accompanying that rapid depreciation. Safe stops should be at $7, our lower limit resistance level as mapped out in the daily chart now that prices are snapping back to the eight month bear trend. 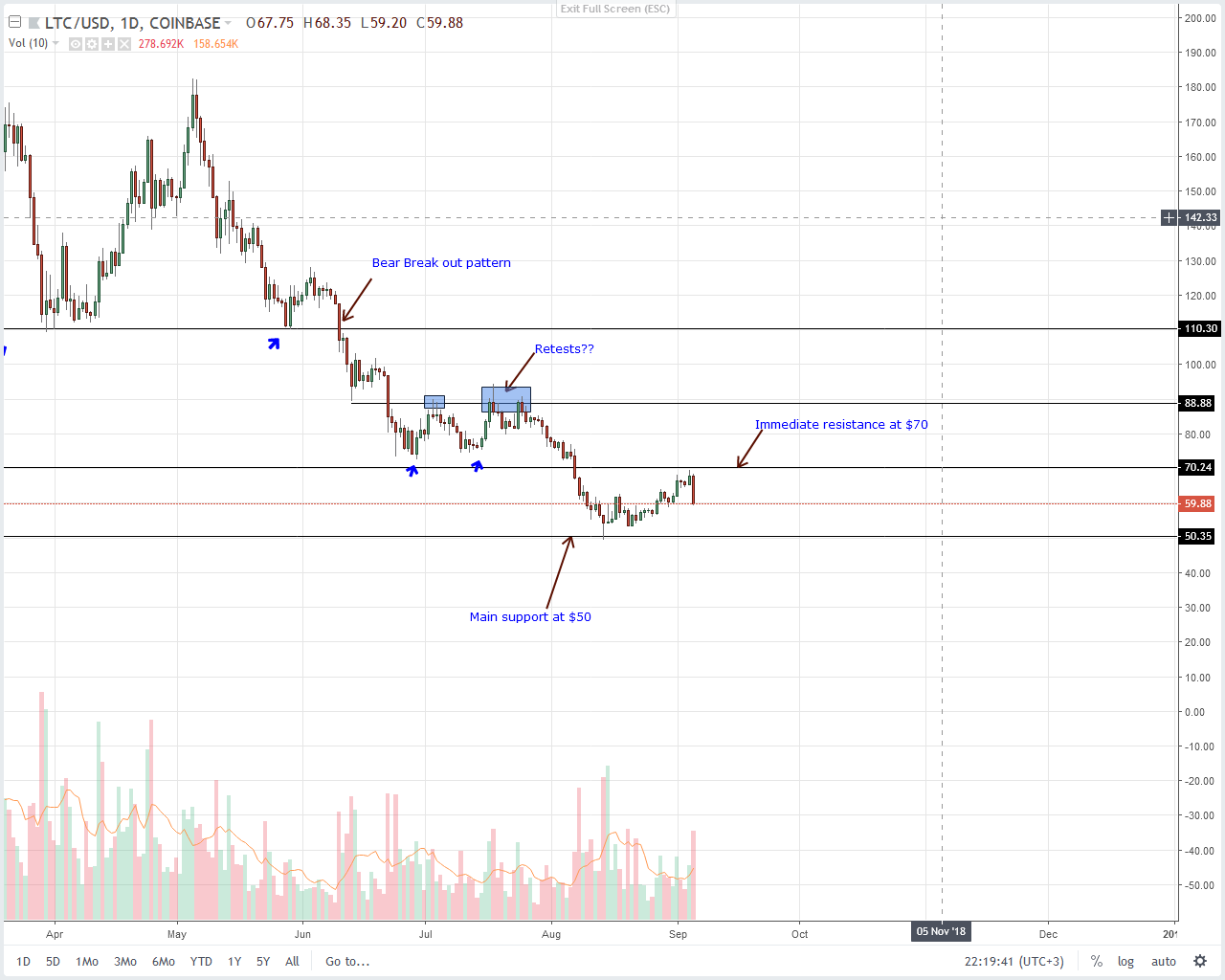 From our previous LTC trade plans, we conservatively considered recent Litecoin gains a retest phase more so from how prices were printing out in the daily chart. Weekly charts were clearly bearish—they always have and our overall trade plan was reliant on last week’s price confirmation in the course of this week.

All in all, it’s an utter disappointment more so because of that clear confirmation of the bear break out strategy of June 10 and Aug 10. As it stands, yesterday’s bear engulfing pattern from $70 confirms bear trend resumption and completion of yet another retest phase as sellers eye for $50 and lower. Because of this, we suggest shorting at spot rates with stops at $70. 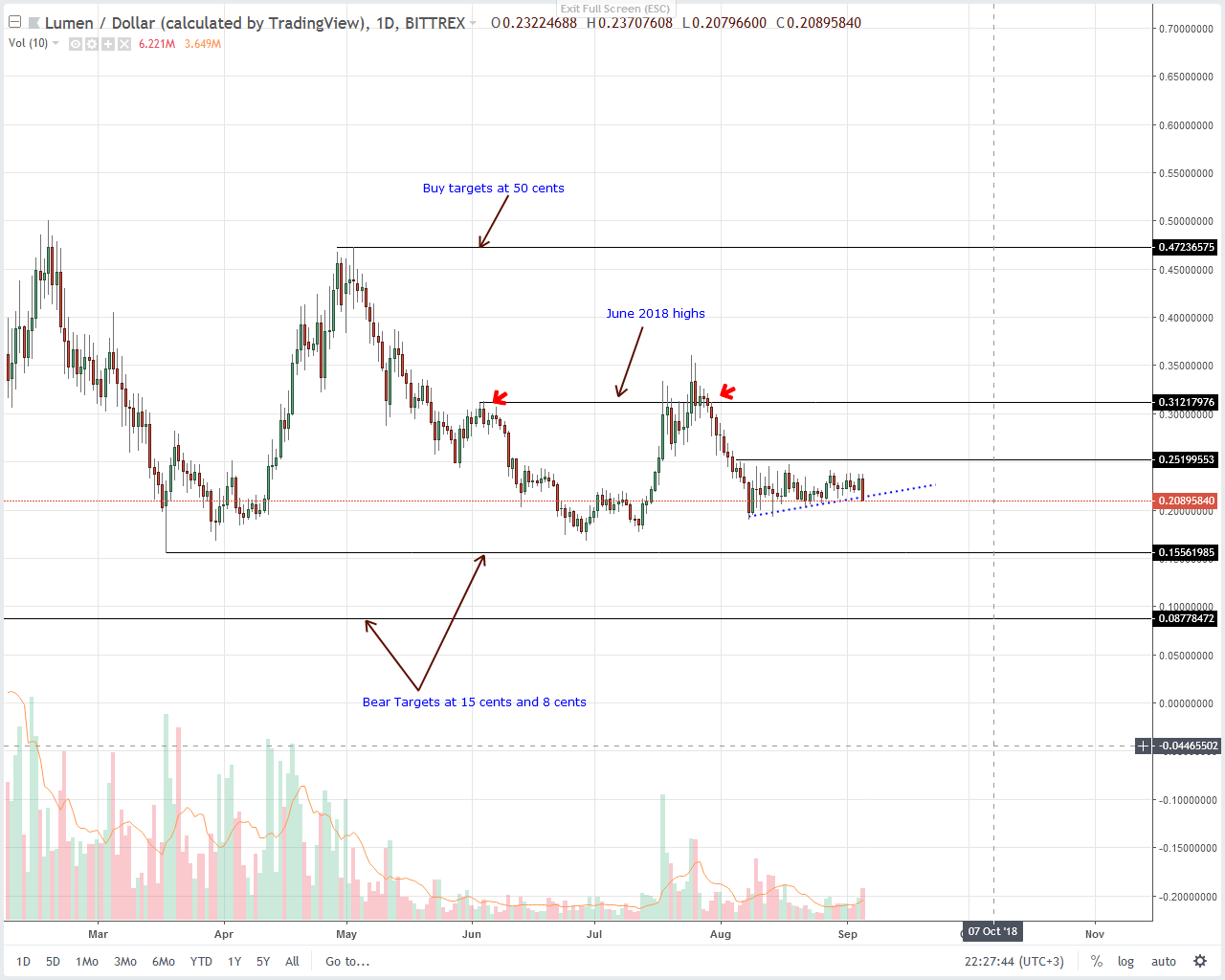 Aside USDT–which is on demand due to altcoin capitulation, Stellar Lumens prices are relatively stable though reflecting the general market trend. It’s down six percent which is pretty low.

Aside price dips, market participation is a stand out and with a marked increase in volume thrusting prices lower, risk off traders can begin unloading XLM in lower time frames with safe stops at 25 cents.

On a conservative stand, risk-on traders are free to trade once prices break the 18 cents-20 cents floors and in that case, immediate targets should be at 8 cents in line with our previous Stellar Lumens (XLM) analysis. 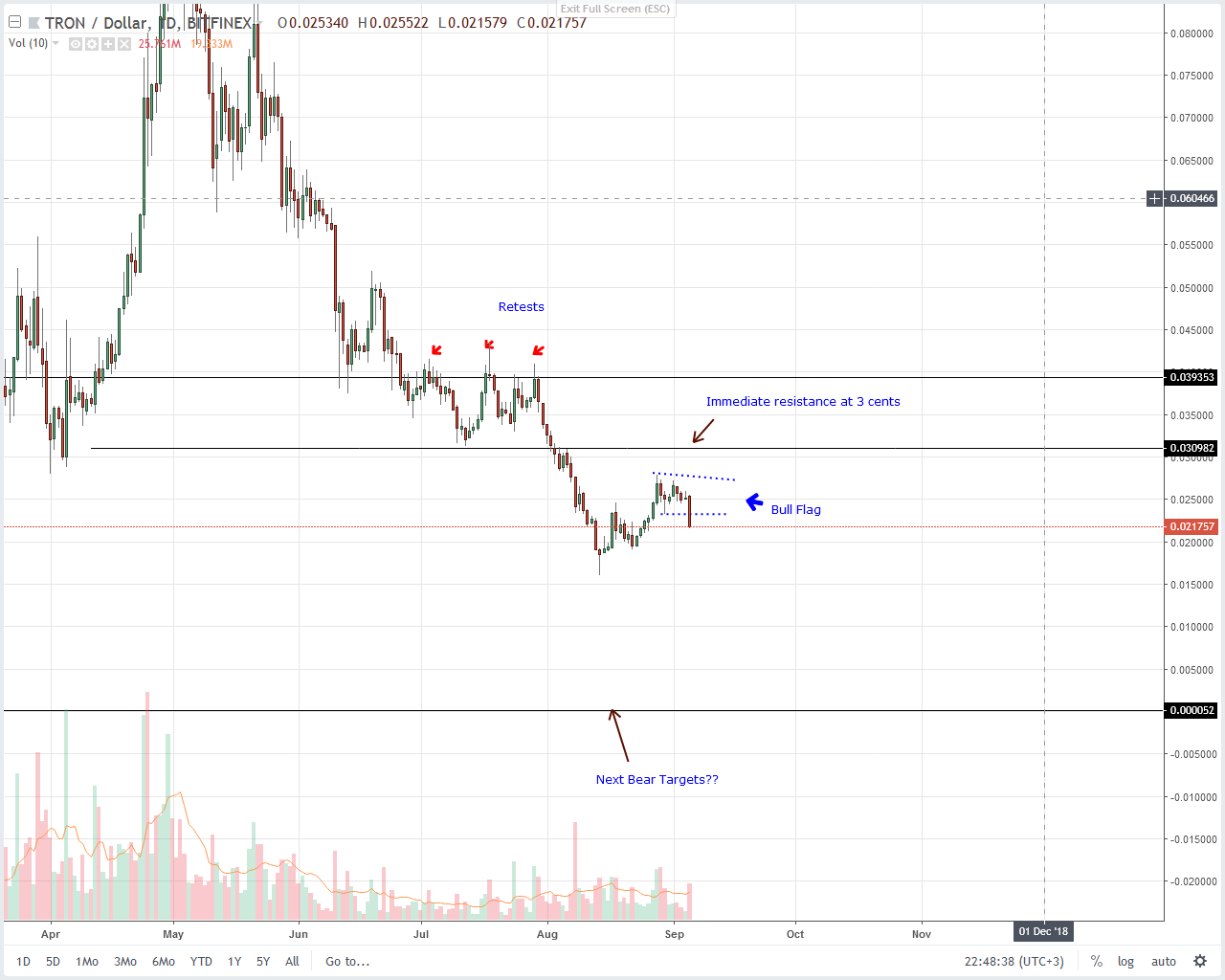 Like most coins under review, it appears as if the retest phase is over following yesterday’s 14 percent price dip.

That’s not all, TRX bears did break below the bull flag of the last two week’s bull recovery and retest phase. It’s along this line that bears appear to be in charge and trading with the trend is prudent. Advised by similar historical patterns, TRX prices might stall today and even recover.

Should they pick up and buyers try to reverse yesterday’s losses, traders could find better trade opportunities to short on those pull backs. Ambitious bear targets remain unchanged as pointed out in our last TRX trade plan. 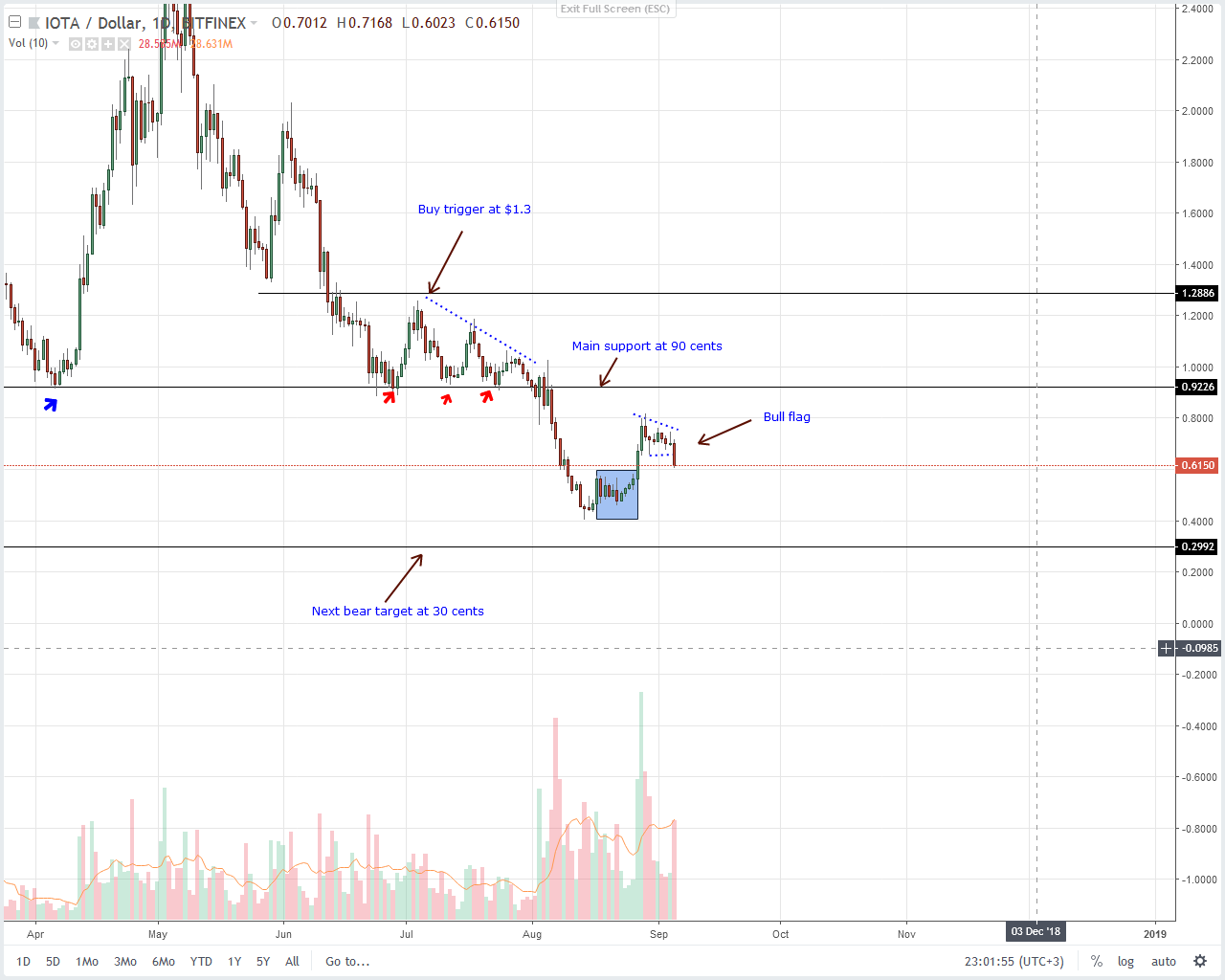 A single bearish engulfing double bar candlestick did not only cancel the past eight days of weak buy pressure but drove IOTA prices back to Aug 17 highs. That’s the 50 cents—55 cents level which founded the basis of our last IOTA optimism.

While it looks likely that prices might slide past it today, the level can be a good sell trigger for bears aiming for 30 cents in the coming day. Generally though, we recommend shorts and until BTC recover, sellers should be in charge.