A 12 percent dip in the last week is enough to spin all sorts of outrageous predictions. Some analysts preaching doomsday for ADA like ETH which Jeremy Lubin of Stellar Lumens said might drop to zero. Well, they might have their reasons but Cardano’s development is exciting. In the next 18 months, project Shelly will be on and thereafter, platform admirers will begin seeing the complexity, if not the superiority of Cardano unfold.

Aside the doom and gloom prediction of altcoins and the “real reality” that ADA and similar coins might be worth zero in coming year, we must laud Cardano for how they approach and device solutions plaguing current blockchain systems. The basis of a Turing complete system relies mostly on smart contracts. Seeing how problematic they have been on the Ethereum network, extra research and resources have been funneled to abate the same from replicating in the Cardano platform.

To begin with, Cardano and Ethereum are competing for the same clientele and while the former uses a Proof of work as consensus, Cardano make use of Proof of Stake, Ouroboros which though thought to be weak guarantees speed and efficiency. Once the Metropolis series are hard forks are complete, Ethereum shall adopt PoS, Casper as consensus besides scaling the network according to incoming demand. Secondly, the transparency in Cardano is incomparable. With each update, the team creates a video update explaining minute details of that specific upgrade. Fact is, Cardano Improvement proposals (CIPs) would come to effect after Project Shelly.

Recently, the Cardano team updated their road map and though improvements and debugging continues on Project Byron. Shelly is the next stage and there, the network will go full throttle on decentralization, stability, interoperability and governance. The Cardano team said with each project completion, the network source code would be more complex, interoperable and stable. Four development stages are pending aside from Byron. They are Shelly, Cougen, Basho and Voltaire. 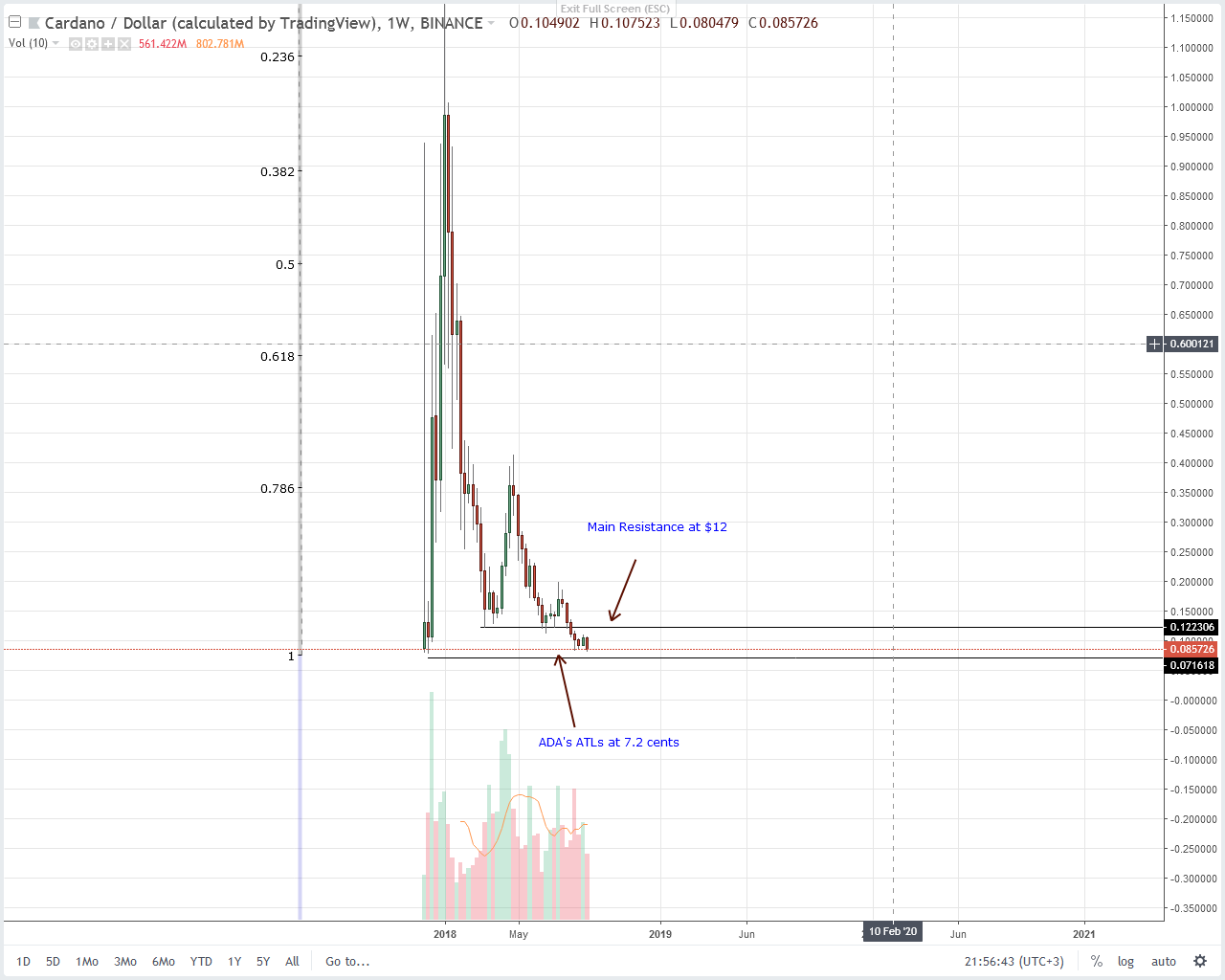 ADA prices are 98 percent down from their ATLs. That is a serious and an unexpected dip by all standards clearly demonstrating how vicious bears have been over the last 12 months or so. Nullifying our previous ADA analysis,  prices continue to lose ground and trading within a bear break out pattern after prices broke below the 12 cents main support line early last month.

Though ADA prices stabilized shortly afterwards, the fact that bulls dint build enough momentum to break and close above the bear break down levels or week ending Aug 12 hints on the strength of bears. In fact after last week’s close, our trade plans were reliant on ADA price confirmation which could possibly build enough momentum for further highs once 12 cents ceilings are broken. 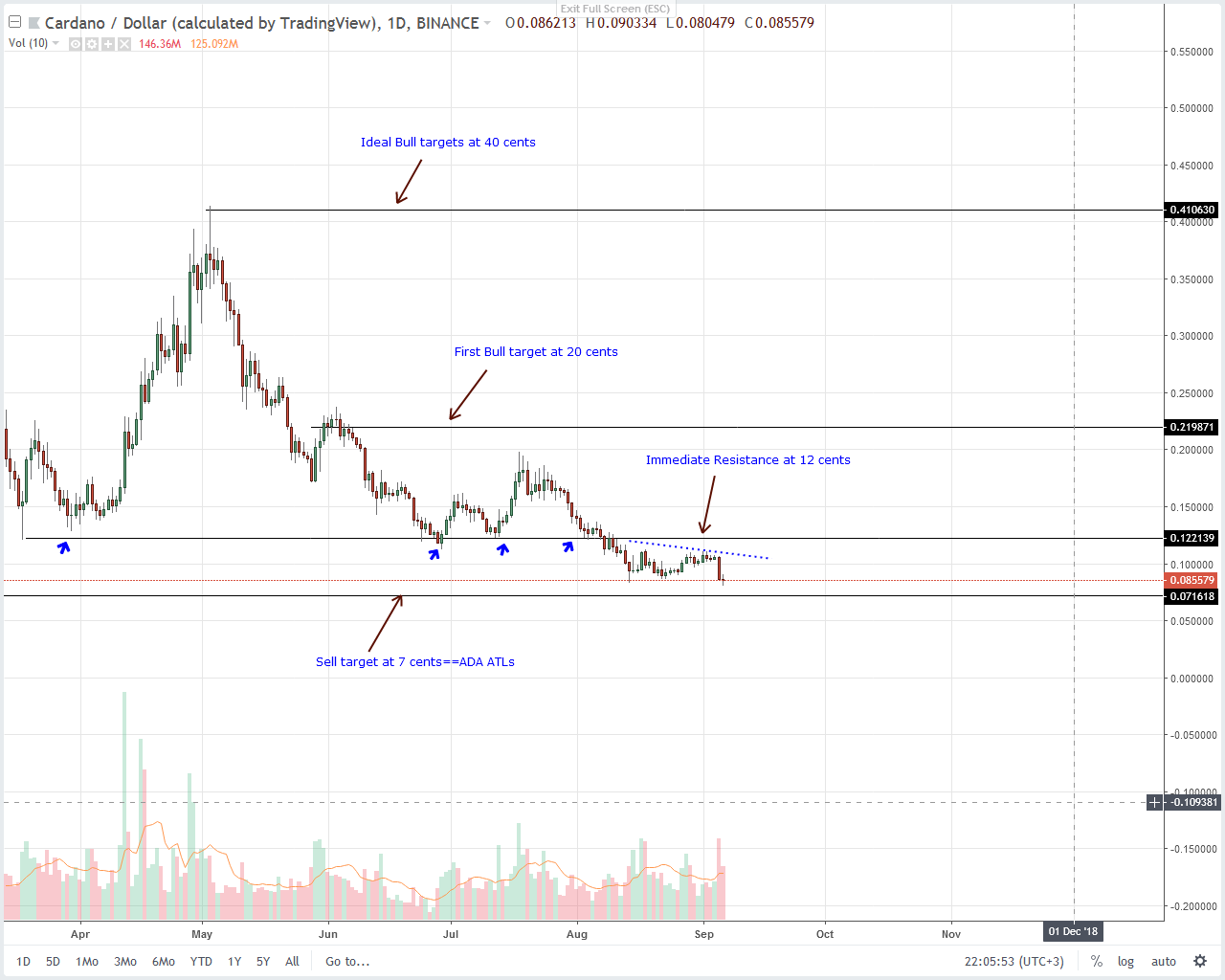 With a four percent drop in the last day, ADA is relatively stable. But this is common. Often, confirming periods of strong volatility is a slow down like yesterdays. Though that cannot be interpreted as a recovery, sellers triggered by Sep 5 bear candlestick can sell on highs with targets at 7 cents or lower. Considering the meltdown as this week edge to a close, we anticipate bears to drop lower. Most probably, ADA might print new 2018 lows by the end of next week.