For what seems like the first time in forever, crypto prices are on the rise again.

There was some excitement on social media yesterday as the SEC took the expected step to delay the decision on a bitcoin backed ETF.

The decision to delay is actually coming 10 days ahead of schedule, which moves the entire timeframe forward a bit. The next deadline is December 29th, right between Christmas and New Year, which means if they delay again before then, we could be looking at a final decision date of mid-February rather than the second week of March, as was previously expected.

In other news, Brazil’s largest broker has finally buckled to the pressure and will now be offering crypto-assets. This comes as around 3 million Brazilians are holding Bitcoin, compared to just 600,000 who invest in stocks.

Cryptocurrencies are rapidly proving their place as the preferred asset class of the millennial generation.

Due to local holidays, there will be no daily market update on Monday, September 24th. We’ll continue as usual on Tuesday.

Please note: All data, figures & graphs are valid as of September 21st. All trading carries risk. Only risk capital you can afford to lose.

The trend comes as yields on the US treasury bonds continue to grind higher. Here we can see the US 10-year yield over the last month. Remember, higher yields were largely considered to be the catalyst for the market dip in early February. 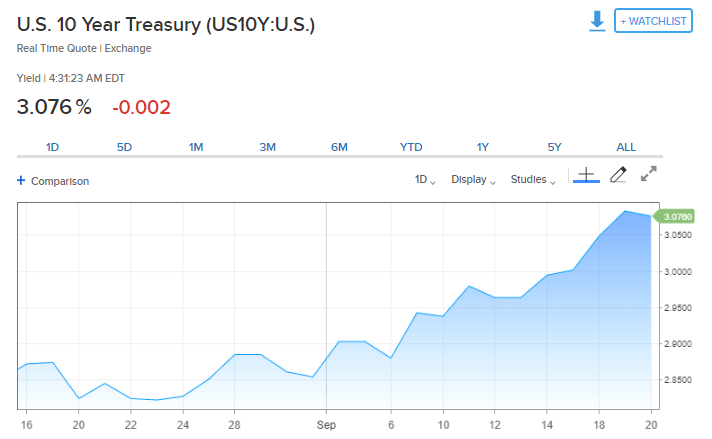 However, the above dynamic doesn’t seem to be hampering the stocks at all. Both the Dow Jones and the SPX500 have marked fresh all-time highs yesterday and Asian markets are following their lead this morning.

The Dollar weakness is also allowing some much-needed breathing room for the precious metals, which have been battered badly over the last few weeks.

Here we can see the Platinum and Silver over the last six months suffering from Dollar strength and the comeback over the last few days.

In light of the recent movements in cannabis-related stocks and the launch of the new eToro @CannabisCare CopyPortfolio, we’ve been talking a lot about the budding marijuana industry and the possible investment opportunities.

Here we can see a map of all the states in the USA and their legalization status. As we can see, the map is now quite green but there’s still a lot more room for growth if other states join the trend and decide to legalize it. 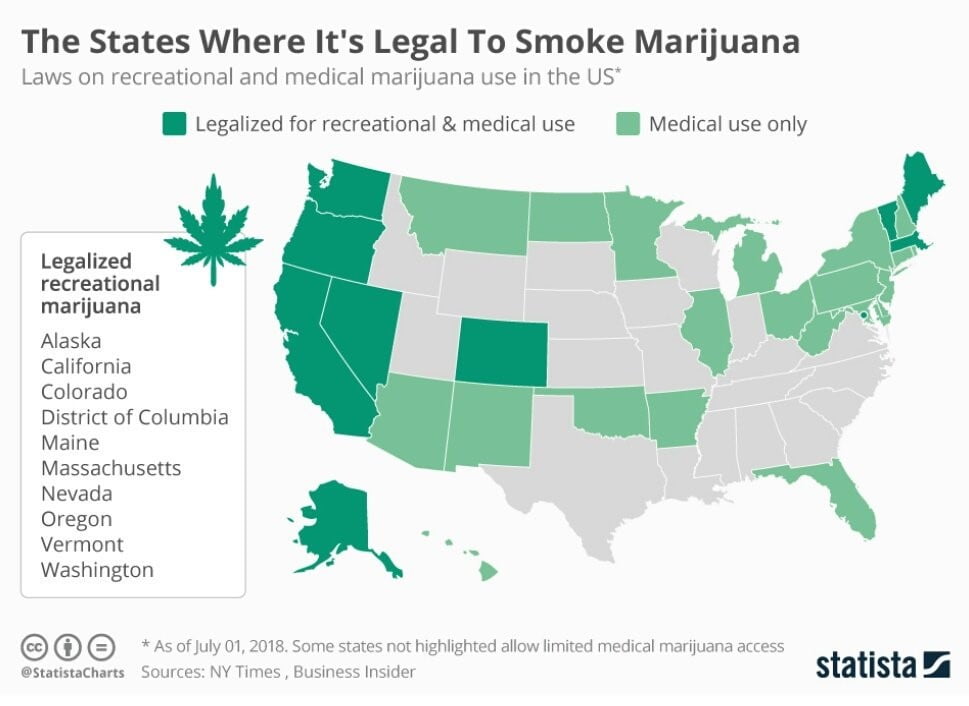 The issue is the Cannabis has yet to be legalized at the federal level in the US making it difficult for vendors and entrepreneurs to open a bank account. Therefore, despite its new legal status in many places the industry is still heavily reliant on cash.

Obviously, cash has its pitfalls and no self-respecting businessman really wants to be walking around with bundles of bills. This is why the Dash foundation in partnership with the Alt Thirty Six payment processor aim to make Dash Cryptocurrency the go-to medium of exchange for the cannabis industry.

We know that Dash has been making strong headway in places like Venezuela. To me, it just seems like this reigning crypto industry leader has their hands in several markets with plenty room for growth.

The recent crypto rally can very much be seen in the context of the weakening Dollar trend highlighted above. As we’ve been saying, the reverse correlation between the USD and the crypto market has been striking over the last few months, so it’s no surprise to the latest rally in crypto assets coming on the back of a weaker Greenback.

In this chart, we can see the US Dollar index in purple and Bitcoin in blue.

The surge in XRP however, cannot be explained by this phenomenon though. A surge of nearly 80% in less than four days needs to have a deeper explanation.

Given the nature of these rapid movements, my gut tells me these fluctuations are more than just speculation. Nevertheless, the main chatter surrounding this move is all about the launch of the xRapid software next month, which aims to use XRP for international settlements. As well as Ripple’s Swell Conference on October 1st and 2nd, which will host Bill Clinton as the keynote speaker and bring in the Counting Crows for entertainment.

Wishing you an amazing weekend ahead!

How Financial Information eXchange Can FIX the Crypto Market

Should Bitcoin Have Trading Halts or Circuit Breakers?

How to Avoid Anything but Real Crypto and Why It Matters

Will Tezos Be the Altcoin to Unseat Ethereum on the Crypto Market?