EOS Price Analysis: A Break Out Imminent in IOTA as Cardano Launch Yoroi

With Yoroi wallet of Cardano, Local Snapshots and Delion API of IOTA, Block One new EOS venture Capital and Stellar Lumens’s InterStellar, the market is vibrant—and fundamentally bullish. Nevertheless, prices are down in the last day adding to their >80 percent losses. Considering this divergence, risk-off traders can find opportunities at spot prices to add their long positions with stops below main support levels.

Block One CEO Brendan Blumer said EOSIO platform will disrupt traditional businesses. In an interview with Bloomberg, the Blumer said Block One, together with their partners, have set aside $1 billion to bolster the development of the EOSIO platform. While assuring investors that though four of their first employees left to start their own blockchain start up BlockStrong, the core team didn’t and there will forge ahead with their original plan. He asserts that their departure is good for the ecosystem since they are still involved in the development of blockchain. 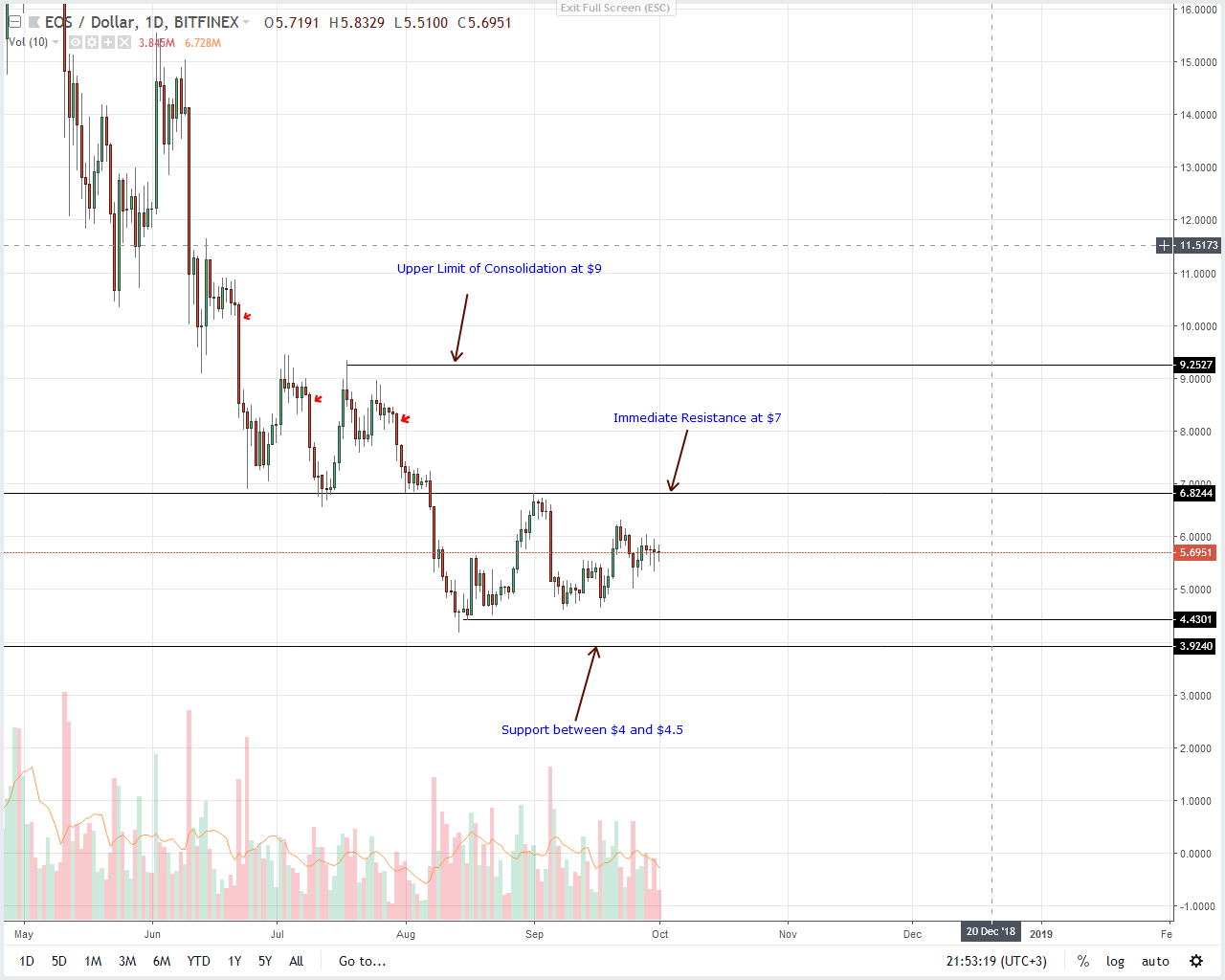 All things constant, EOS prices are stable and oscillating tightly within a $1 range. Besides the ranging market, prices are also trading below week ending Sep 23 highs.

Their failure to thrust above $6.4 and $7 embolden sellers keen on unloading EOS. Notice that while the market is optimistic, traders need to see strong surges above key resistance line at $7 triggering risk-averse longs.

Otherwise for now, we are expectant of higher highs because prices are still confined within Sep 27 bullish candlestick. Any sharp drop below last week’s lows at $5 might trigger a new wave of sell pressure trading in line with Sep 5 bearish engulfing pattern. This might as well drive prices towards $4, our main support line. 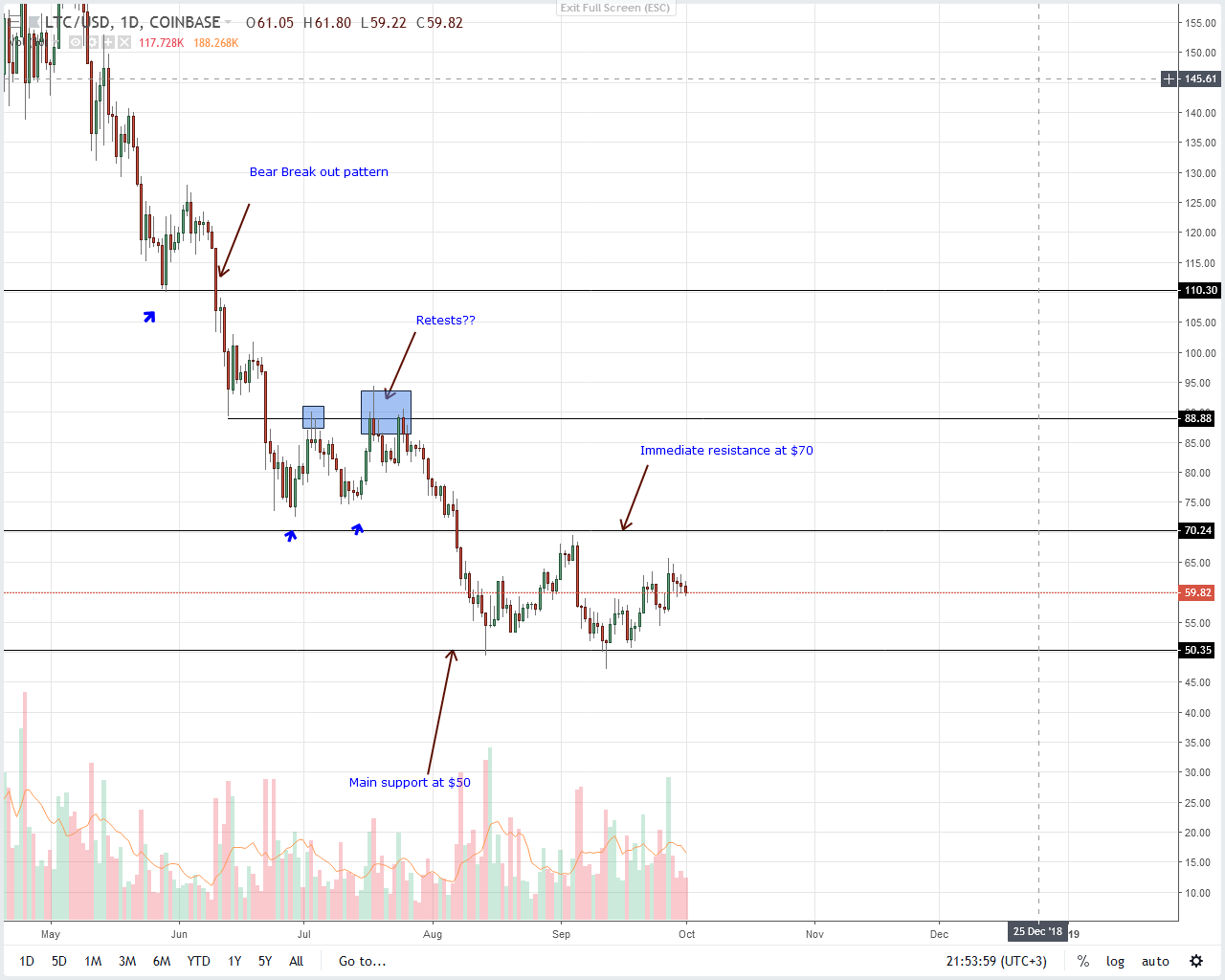 Litecoin is down two percent in the last two days but that doesn’t mean sellers are in charge. Drawing a Fibonacci retracement tool between last week’s high low reveals that Litecoin prices are down 80 percent from 2017 highs. Historically, this is around the same levels where prices bounce back but rarely retest previous highs.

We hold the same preview for Litecoin and look to trade with market sentiment which is bullish. Additionally, LTC prices are technically consolidating within Sep 27 high low.

This is why we recommend buying at spot rate with stops at Sep 27 lows at around $55. On the other hand, risk on traders should stay on the sideline. That’s until after there clear breaks above $70—an important resistance level. 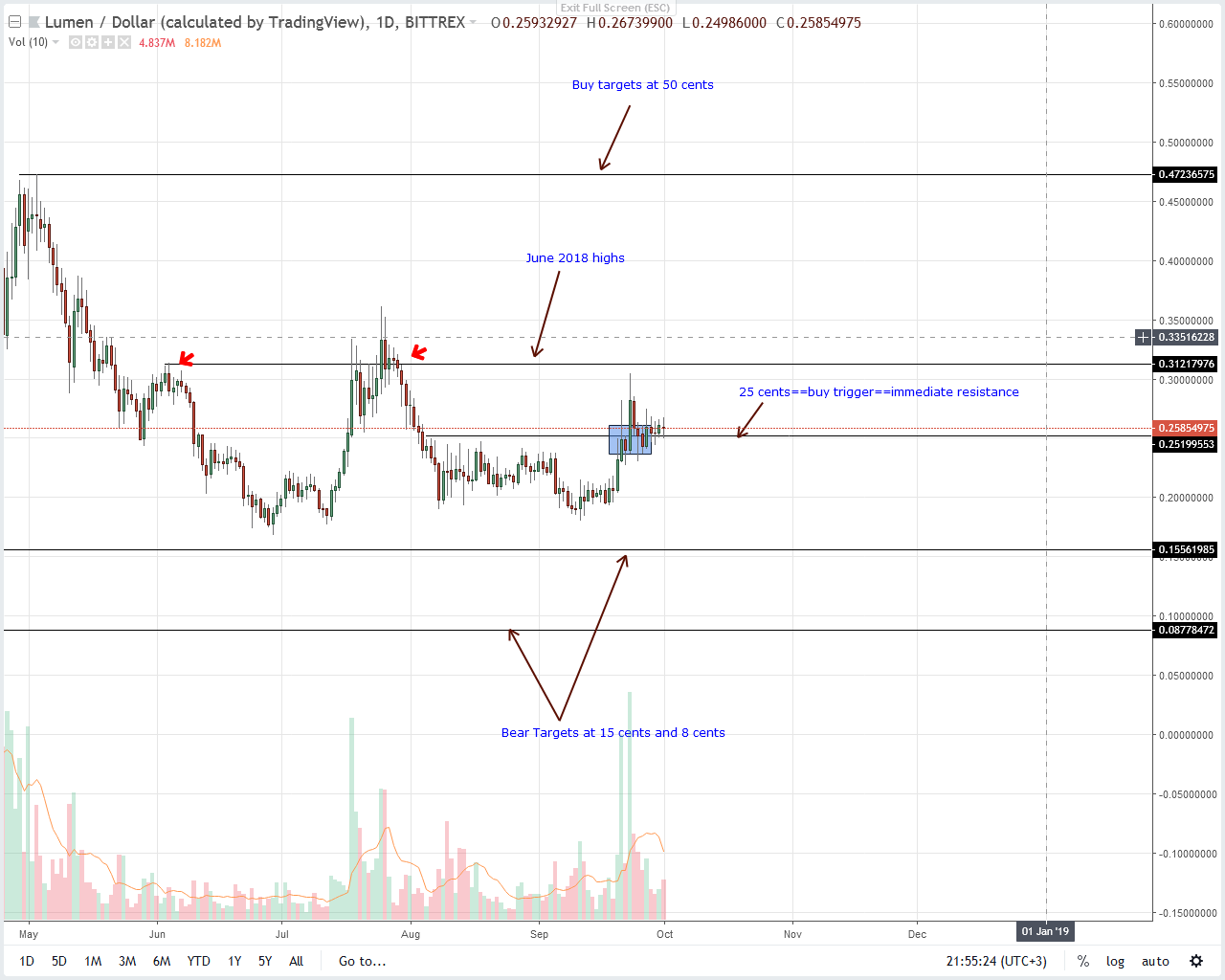 XLM prices are stable to say the least. And while they consolidate inside Sep 23 high low, bulls stand a chance. This is so because not only are prices above 25 cents, our previous break out level, but the fact that sellers didn’t gain enough momentum to reverse gains of Sep 23 hints of underlying demand for Stellar Lumens.

Like our last Stellar Lumens trade plan, we are net bullish with active XLM trades due to Sep 27 reversal from around the 50 percent Fibonacci retracement level of Sep 23 high low.

Aside, when we factor in volumes, bulls have an upper hand. Prices are simply playing with gains of Sep 23. Those gains were temporarily confirmed by Sep 27—both bars have abnormally high volumes. So, unless there is a sharp drop of price below 22 cents and 20 cents, our previous Stellar Lumens price analysis is valid.

Yoroi, Cardano’s web wallet is now live. The light web wallet supports five languages. With Yoroi, users can securely store and control their ADA coins without necessarily syncing with the Cardano’s blockchain. Aside from storage and expenditure, users can transfer coins straight from Daedalus. But perhaps a stand out feature is that Yoroi doesn’t demand a lot of bandwidth. 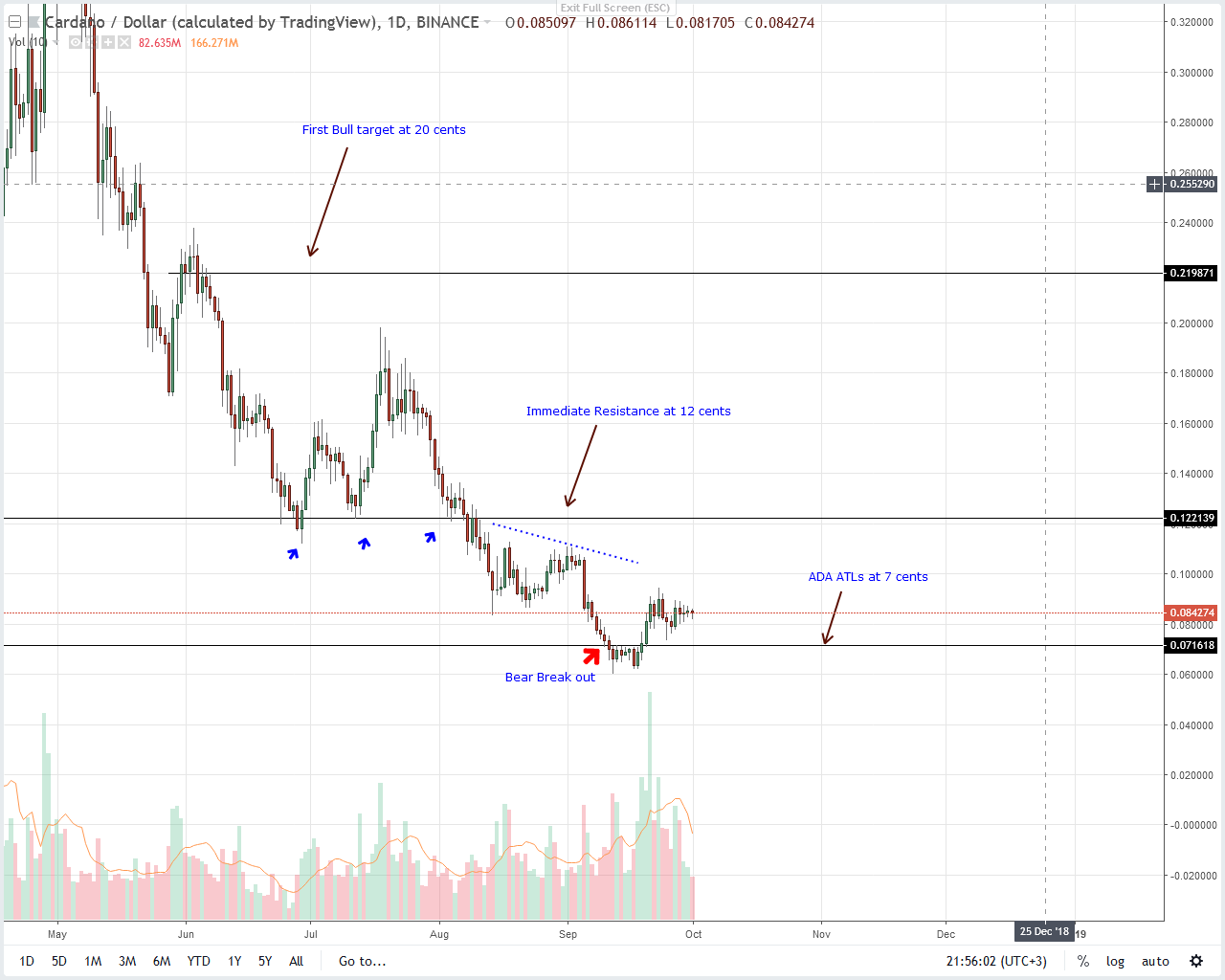 Price wise, the launch of Yoroi didn’t affect prices. Matter of fact, ADA is down one spot to ninth sliding three percent in the process. As it is the low volatility and stability of ADA prices above 7 cents but below the all important 12 cents validates yesterday’s Cardano trade plan.

Earlier, we stated that for ADA buys to be valid then we need to see strong movements above Sep 27 highs. That’s before aggressive traders can load up. When that happens, ideal stops will be at 7 cents, ADA’s ATLs.

But, for risk-on type of traders, price rally above 12 cents shall trigger buyers searching to ramp up on dips with first targets at 20 cents. As long as prices range like this, conservatives should retain a neutral stand.

During the “Putting the Proof back Into Proof of Concept”, Terry Shane – founder of bIOTAsphere demonstrated a new Proof of Concept that can not only improve industries functionality but lay the ground for further innovation.

Local Snapshots, a new feature which the IOTA Foundation plans to introduce in the next weeks will solve the space problem often associated with growth and adoption. The feature makes it easy for users to set up and operate nodes. 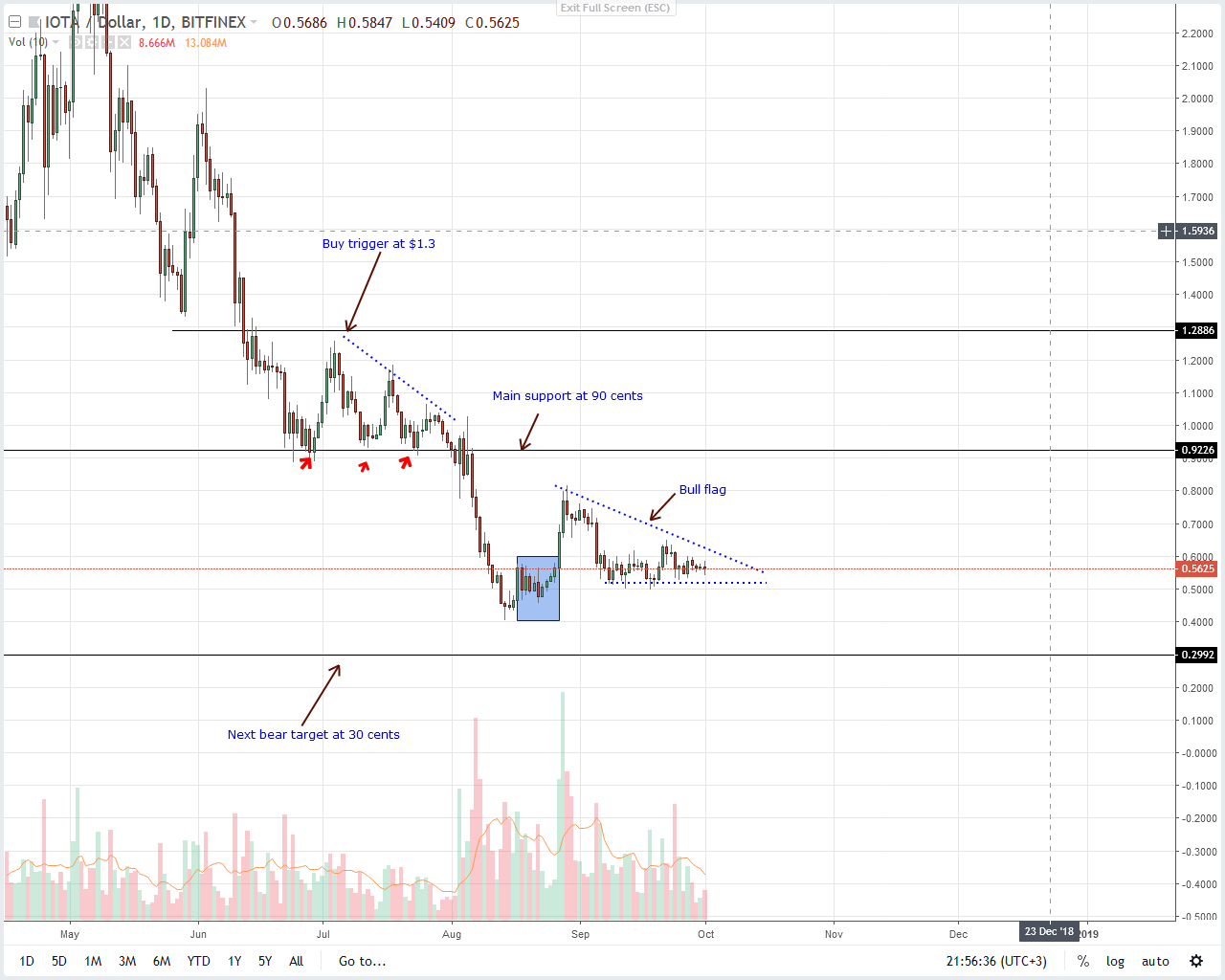 Aside from the descending wedge or a bull flag, there are strong floors at around 50 cents. The minor resistance trend line acts as a strong liquidator.

Besides, the fact that prices are approaching the final section of the triangle, we recommend patience. Since prices are down >85 percent from 2017 peaks, recoveries above 65 cents is likely. Before that prints out, we retain a neutral stand.