Peer Stablecoins are Showing 10% Premium against a Weak Tether

A mass exodus from the most popular dollar-pegged stablecoin Tether (USDT) has led to its devaluation against peer stablecoins.

USDT on Monday broke away from its historically tight link with the US Dollar to touch 85 cents across multiple crypto-exchanges. As a result, a substantial USDT volume shifted to other cryptocurrencies, including Bitcoin, raising their price in an otherwise bearish market. Among the gainers were also other stablecoins whose per token value advanced against the dollar – as well as the Tether’s USDT.

Traders started to flee USDT in the wake of growing skepticism against its issuers. There were doubts about whether Tether was operating a fractional reserve to inflate the Bitcoin price artificially. But traders opted to pool their crypto funds into USDT to protect themselves against the market’s trademark volatility. The faith in Tether diminished at last on Monday amid speculation over its poor financial status and alleged BitFinex’s insolvency, an exchange whose CEO is the USDT issuer.

At the same time, stablecoins promising lower credit risk than USDT have shown up to 10% premium in their price against the USDT. Circle and Gemini, for instance, noted an impressive surge in their stablecoin prices against the dollar. While Gemini’s GUSD token surged as high as $1.05, Circle’s USDC established its new monthly high near $1.07, according to data available at CoinMarketCap.com.

where a simple filthy statist buck is "worth" $1.08 on an exchange… because reasons: pic.twitter.com/ktQaaLHojb

TrueUSD, Gemini and Circle are US-regulated entities and are liable to issue tokens backed by real fiat funds or face severe penalties. Tether, on the other hand, has been accused of ducking independent financial audits of its balance sheets in the past, to which it reasoned that the auditing procedures were “excruciatingly detailed.”

It demonstrates why a growing negative sentiment in Tether market is influencing USDT holders to fly to less risky alternatives like TrueUSD, USDC, and GUSD. Alex Kruger, in his interview to NewsBTC’s Chief Editor Joseph Young, had predicted the ongoing scenario earlier.

“One should expect a great percentage of all USDT (Tether) holdings to migrate to GUSD (Gemini) and USDC (Circle),” he had said. 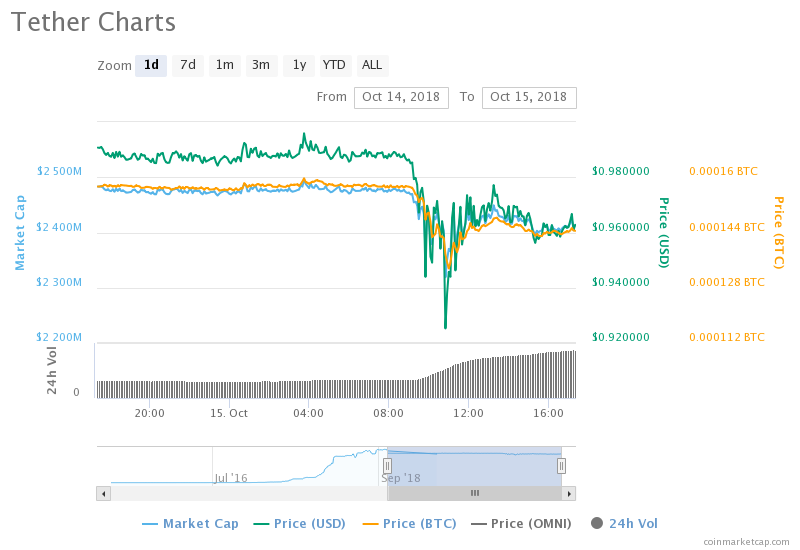 The USDT/USD is now undergoing a reversal action, the authenticity of which cannot be verified at the time of this writing. The tether issuer would need to settle community criticism once for all by opening their doors to independent financial auditors and make their balance sheets public. Unless that happens, one cannot look at the so-called stablecoin as a haven for safe crypto parking anymore.

The recent market performance of Tether’s peers has proven that the community would jump the sides than stay in the superstition of stability.

Tags: bitcoincryptostablecointether
TweetShare
BitStarz Player Lands $2,459,124 Record Win! Could you be next big winner? Win up to $1,000,000 in One Spin at CryptoSlots