It will always be there that EOS critics will point out to the level of centralization visible in the block producers list. Unfortunately, they will always turn a blind eye to the platform’s stellar performance. Nonetheless, we expect higher highs in days to come and as Monero prepares for a system upgrade tomorrow, they are releasing a new GUI update for their full nodes. 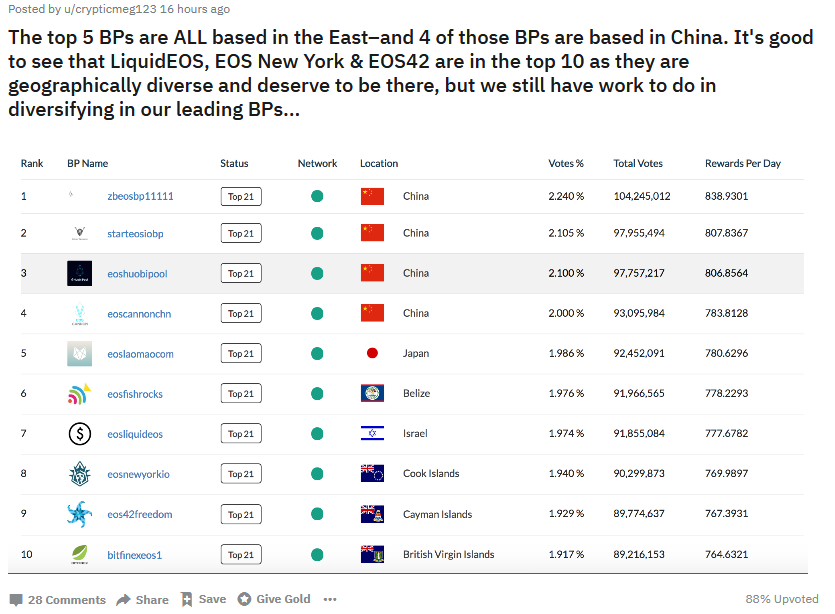 That the dPoS consensus algorithm and the use of 21 block producers have some elements of centralization is nothing new. In fact, that is something that has been trending in the space for sometimes now. As seen from recent analysis of the top 5 block producers, it’s clear that Asia validators are dominant. In the top 5, four out of five block producers are from China while US based producers (LiquidEOS, EOS New York & EOS42) are at the periphery. 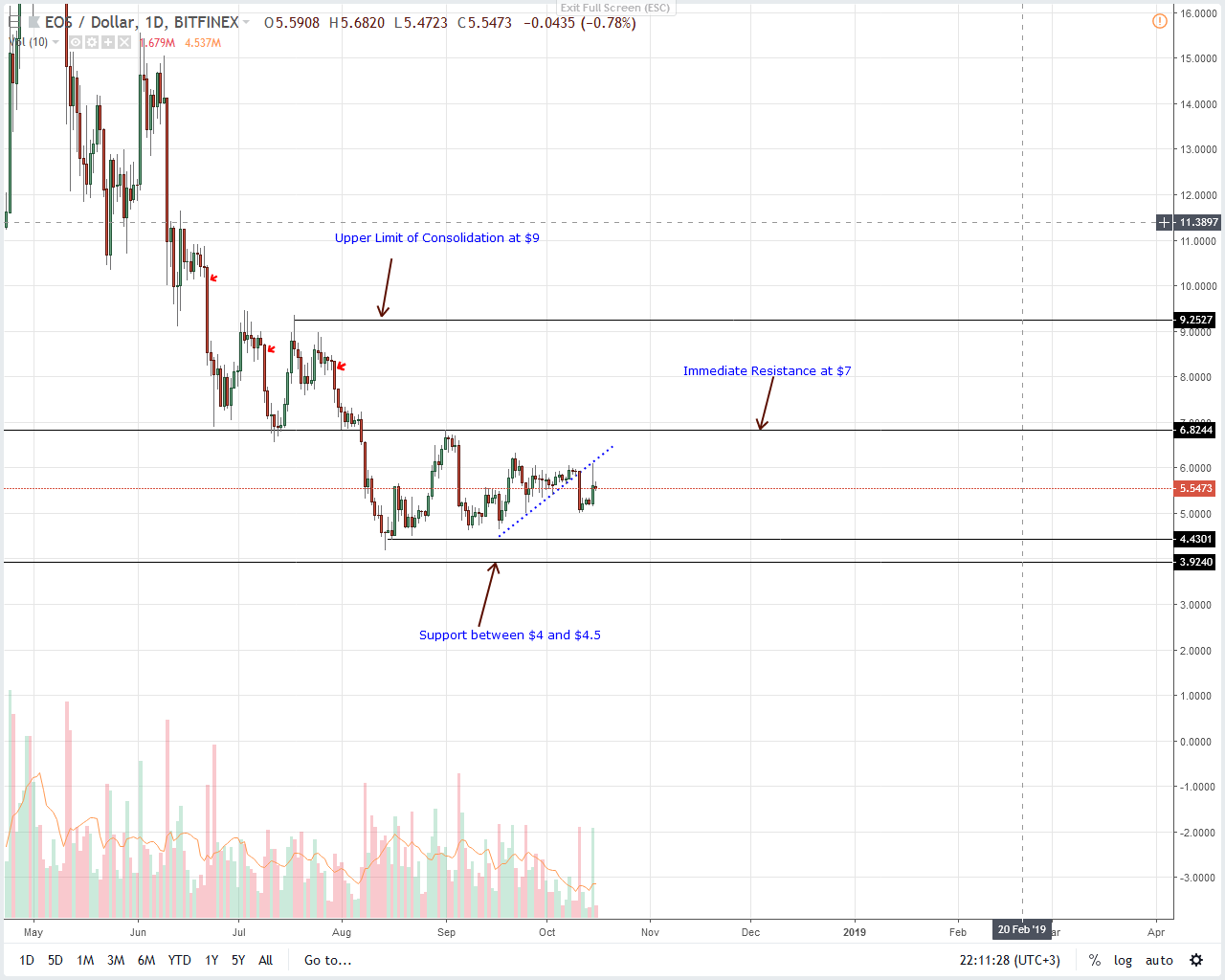 Back to price and EOS did slow down yesterday. However, this doesn’t mean that aggressive EOS bulls should exit that trade. As a matter of fact, every lower low is another loading opportunity. Therefore, like in our previous EOS trade recommendation, traders should look to buy on dips in lower time frames with first targets at $7—the lower limit of our resistance zone. If there is a break out, we recommend risk averse traders to sync with the new-found momentum and aim for $9.

Days after backing Monero, Charlie Lee is on the news again. While acknowledging the growth of Bitcoin and Litecoin and their path towards mass adoption, the Litecoin founder said that the Asian market will lead in that race. He is of the opinion that mass adoption in the US will need a little bit of a nudge. Further, Lightning Network is a path towards scalability and its implementation won’t come at the sacrifice of decentralization. 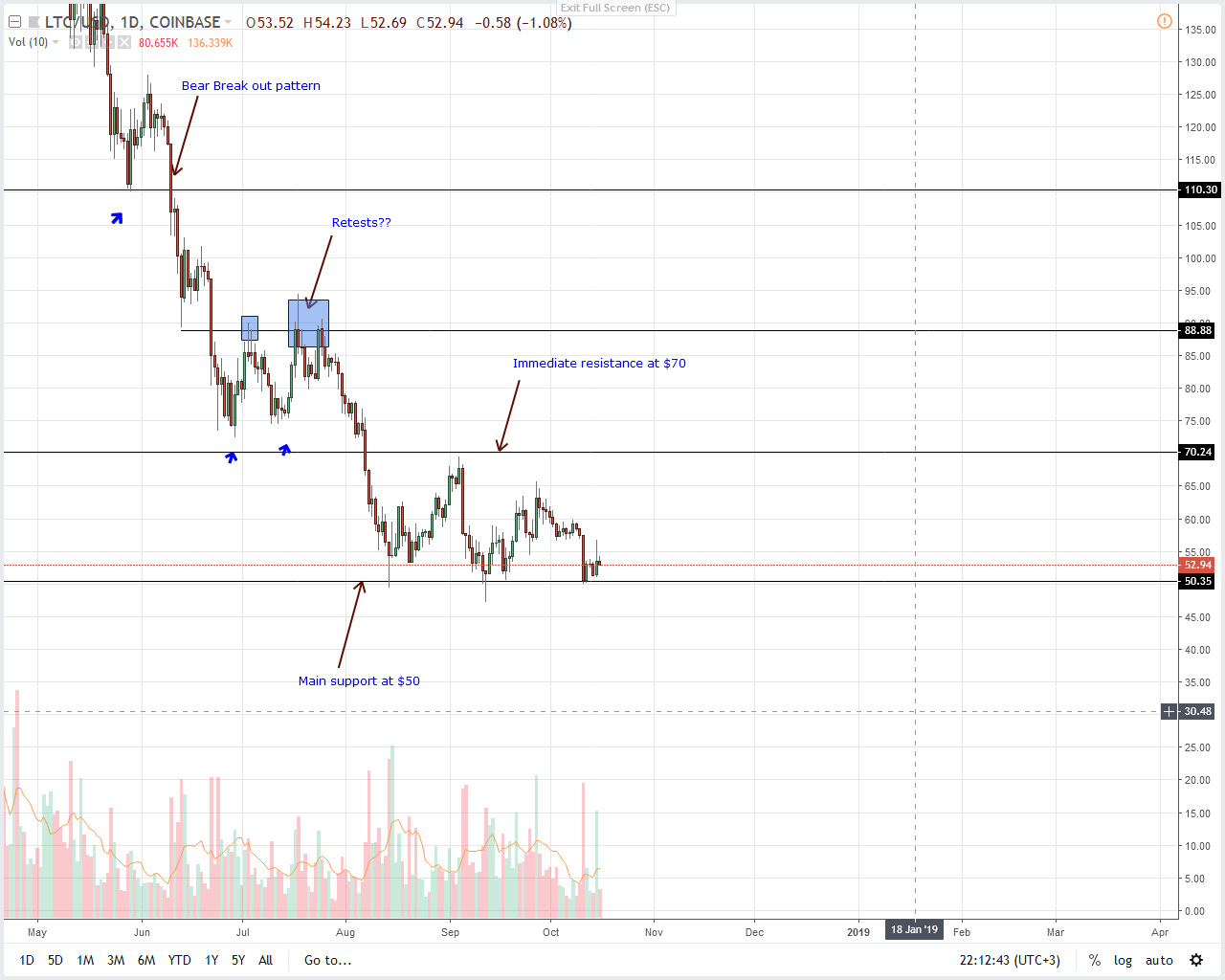 Like the rest of the market, Litecoin is up three percent in the last day. This slow down was expected. On numerous occasions it has been shown that prices taper after rapid price changes. Despite momentum declines, the huge volumes behind Oct 15 gains might end up being the necessary impetus needed to drive prices towards the main resistance level at $70. For now, aggressive traders can ride with the overall expectations in the market, loading up small positions with stops at Oct 14 lows at $50. 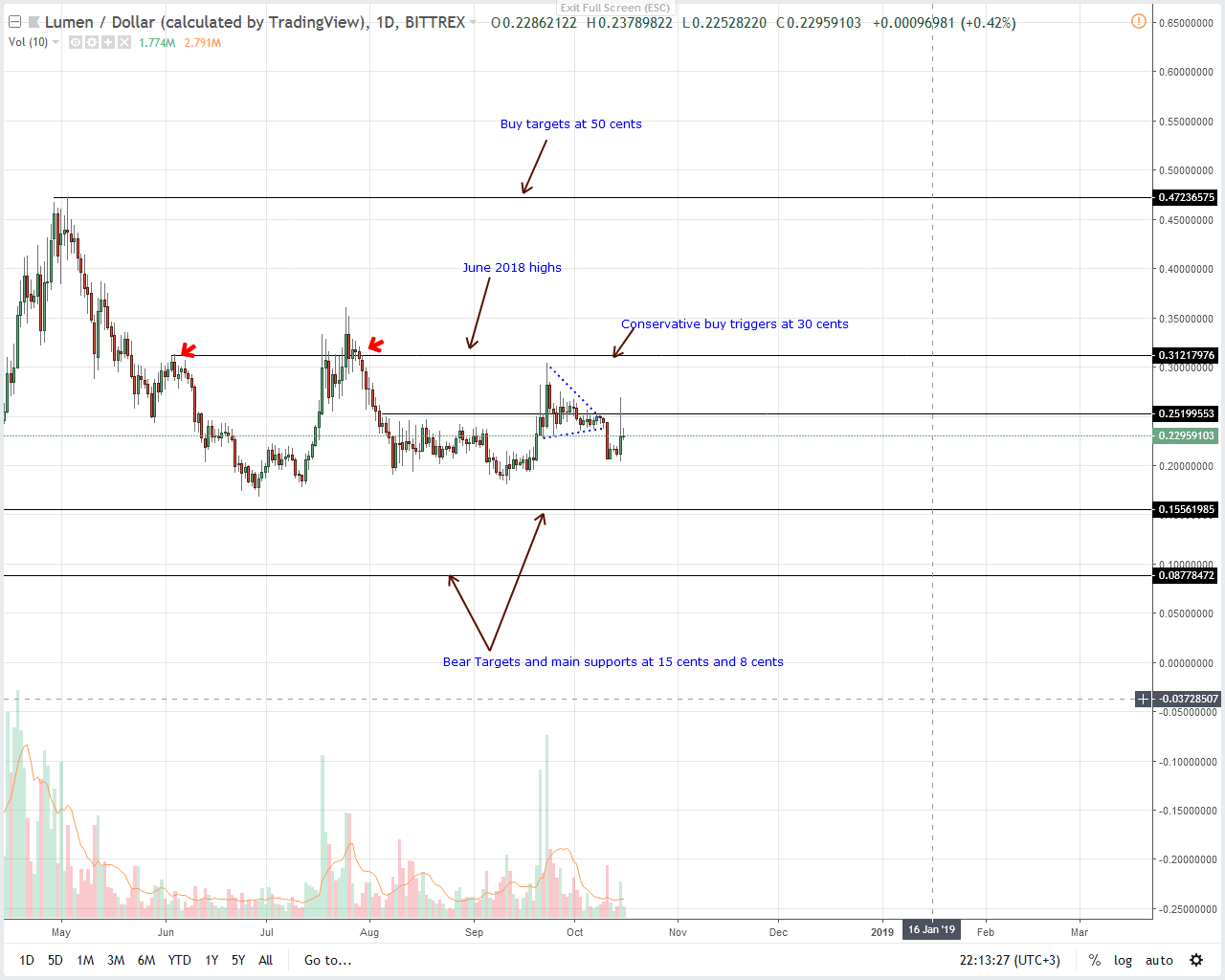 Still, Stellar Lumens prices are trending inside Oct 15 high lows. Furthermore, it’s below the minor buy trigger line at 25 cents. All things constant, we retain a positive outlook on this coin in line with our last Stellar Lumens price analysis. Going forward, our trading is simple. As before, aggressive traders can begin loading at spot rates or once prices edge above Aug highs.

In the meantime, risk-averse traders have better odds of higher highs if they rally above 30 cents breaking above the four-month consolidation which began in late June 2018. On the flip side, tide reversals that will see prices dip below 20 cent invalidates this bullish outlook.

"This is the GUI v0.13.0.3 'Beryllium Bullet' point release, which a user should run to be sufficiently prepared for the scheduled protocol upgrade of October 18 (for which more information can be found here)." https://t.co/0mXg9NO805

The GUI v0.13.0.3 ‘Beryllium Bullet’ of Monero is now available. Monero full nodes should run this version in readiness of Oct 18 protocol upgrade. 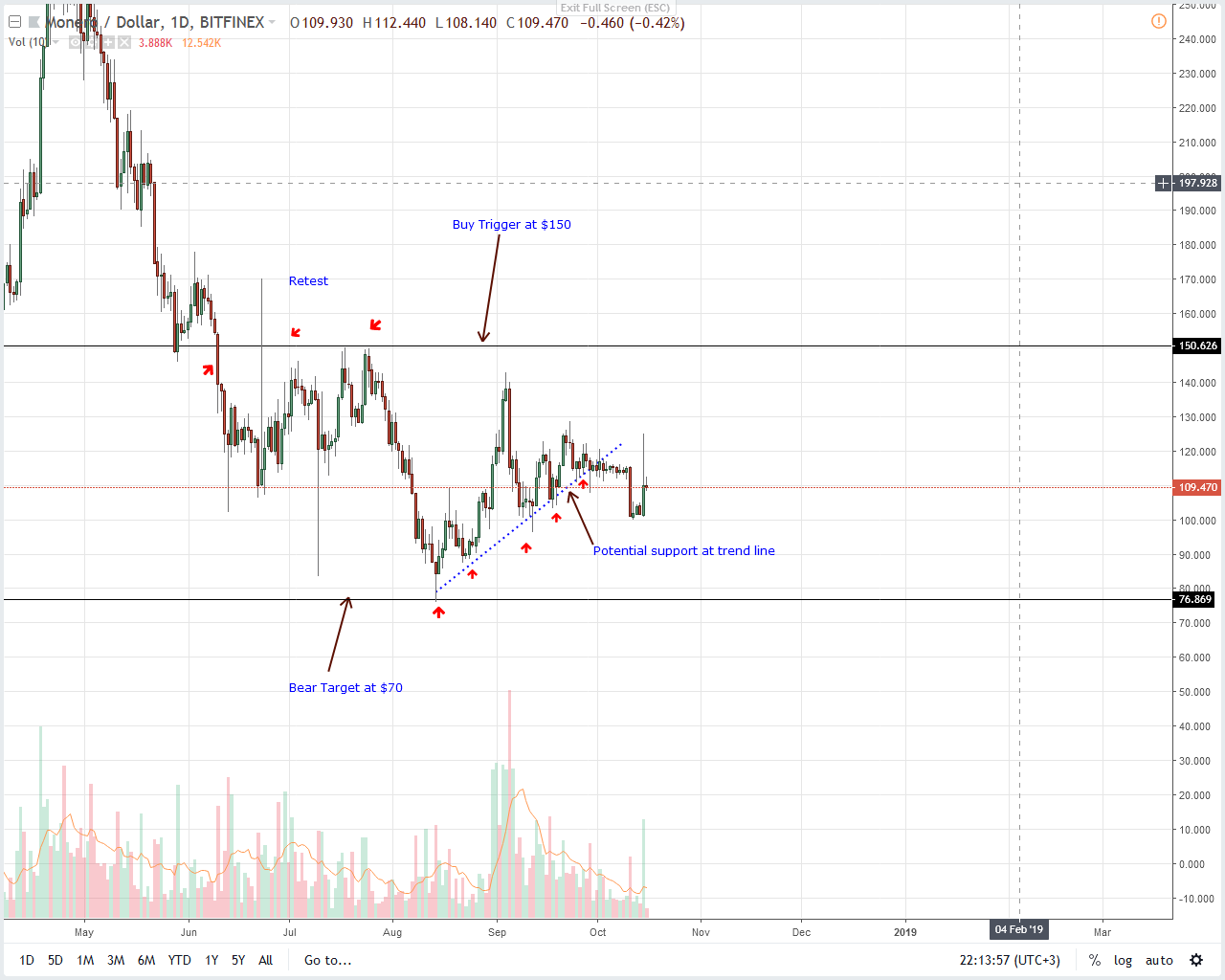 Because of Oct 15 whip saws, our stops at $120 were hit. Regardless, we retain a bearish outlook now that prices are literally ranging within a tight $20-$30 range with solid supports at $100. Unless otherwise, our previous Monero trade plan is valid. In that case, we can trade Monero two ways depending on break outs.

First, any surge above $150 triggers a wave of buyers eyeing $300. On the reverse side, depreciation below $100 and bears can first target $70 as the bear break out pattern of June 10 take root. Overly, there is this expectation in the market and it is likely that bulls will build momentum after shedding more than 70 percent from 2017 highs.

The petition to get the Cardano Foundation chairman out is picking up. So far, more than 2,500 believers of the Cardano vision and venture have appended their signature backing Charles Hoskinson calls. In the meantime, Charles is in Toronto attending a cryptographic conference. It’s expected that Cardano’s sharding design and their take on DAG will take center stage. In the meantime, Cardano 1.3.1 is out while 1.4.1 is already ahead of schedule and is due for quality assurance testing. 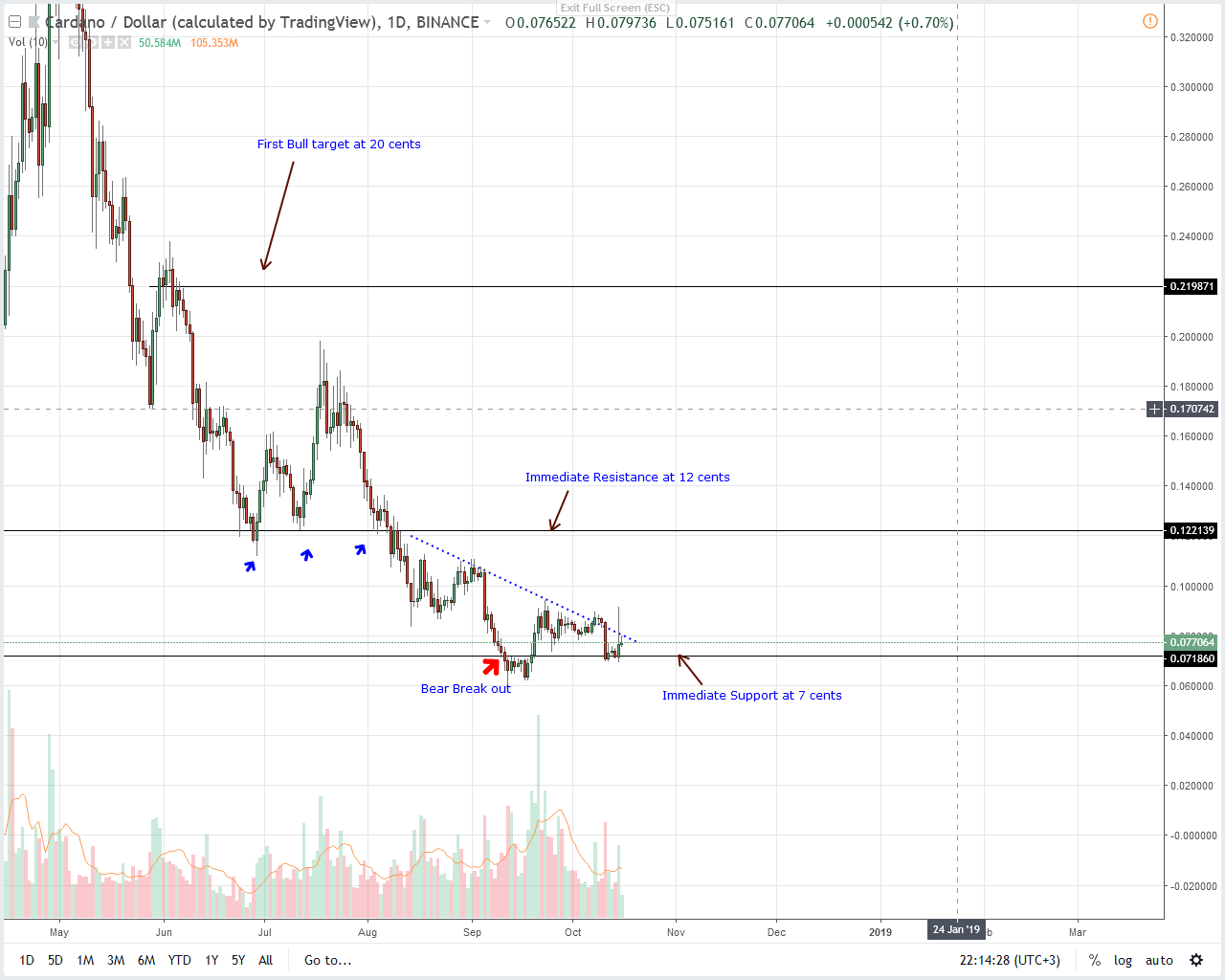 Overly Cardano is stable and down 12 percent in the last week. Regardless, our previous Cardano price analysis is valid and we are likely to see strong rallies above the immediate minor resistance trend line and 9.5 cents triggering our short term bulls. From candlestick arrangement, bulls could edge up higher today and clear the main resistance line at 12 cents.