Overly, there is expectation in the space. Thanks to a successful Monero hard fork, the new “Segwit” mean transactions would cost less. At the same time, the new confirmation from Tron about their “partnership” with Baidu should keep the market vibrant as bulls prepare for gains above 3 cents.

To curb money laundering or terrorist financing, most crypto exchanges and fiat-crypto processors demand users to submit personal details as part of their KYC and AML requirements.

https://t.co/LgcclYjBIb President Rob Jesudason writes that the financial system can ill afford to ignore the blockchain's benefits for tackling issues such as money laundering and #KYC. https://t.co/qFuW9IzW63

However, the President of Block One Rob Jesudason is of the opinion that the incorporation of blockchain technology will increase the effectiveness of this effort. 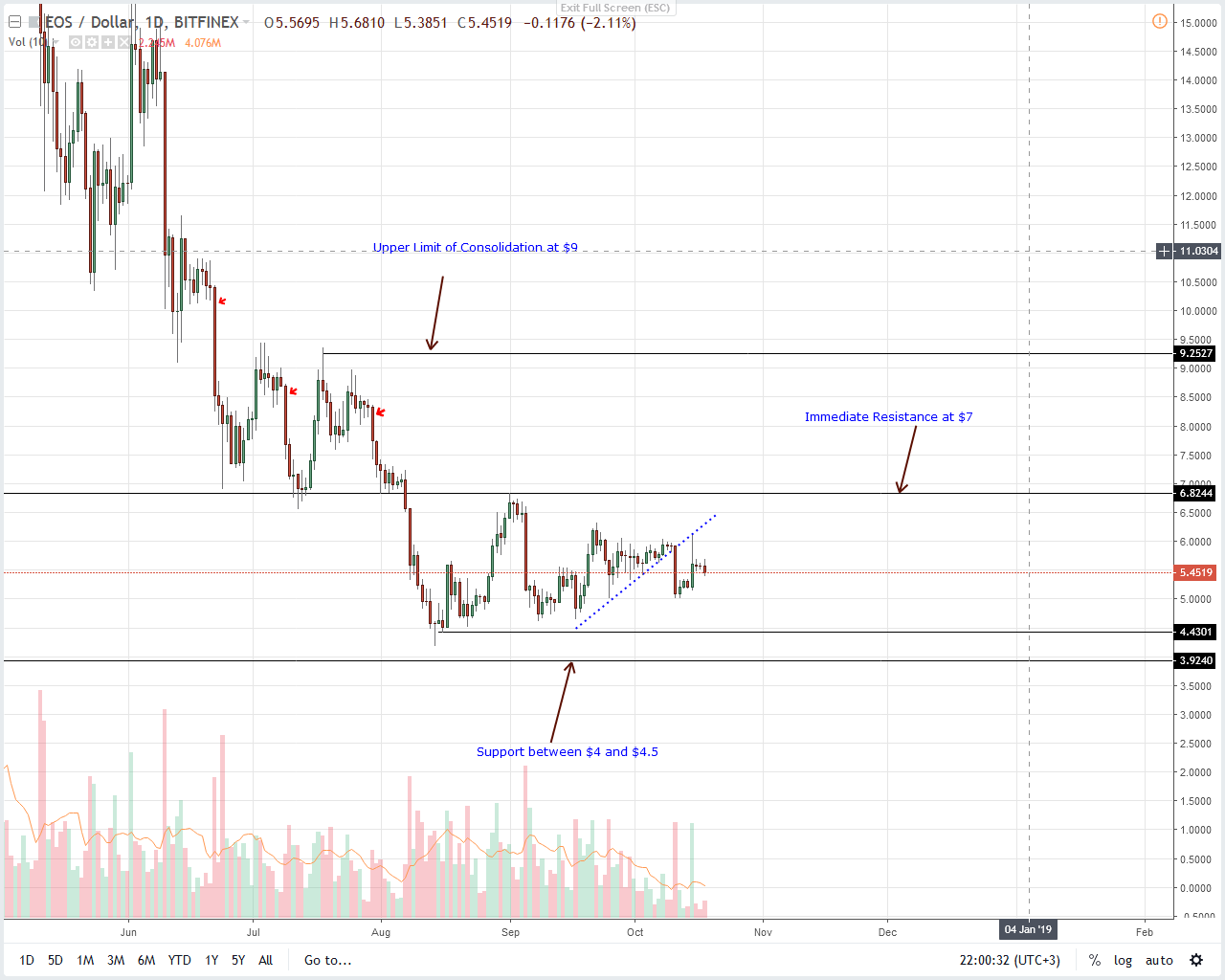 From the chart, it’s clear that prices are trading within a tight 30 cents range meaning the lack of activity cements our previous EOS price analysis. Moving forward, we expect prices to edge higher after dropping more than 80 percent from 2017 highs in line with Fibonacci retracement stipulations. As such, we expect bulls to ideally accumulate in lower time frames in readiness for a rally above $7 triggering our bulls. Like before, we retain a neutral to bullish stand before our trade conditions are met aware that declines below $4.5 deflates buyer’s ambitions. 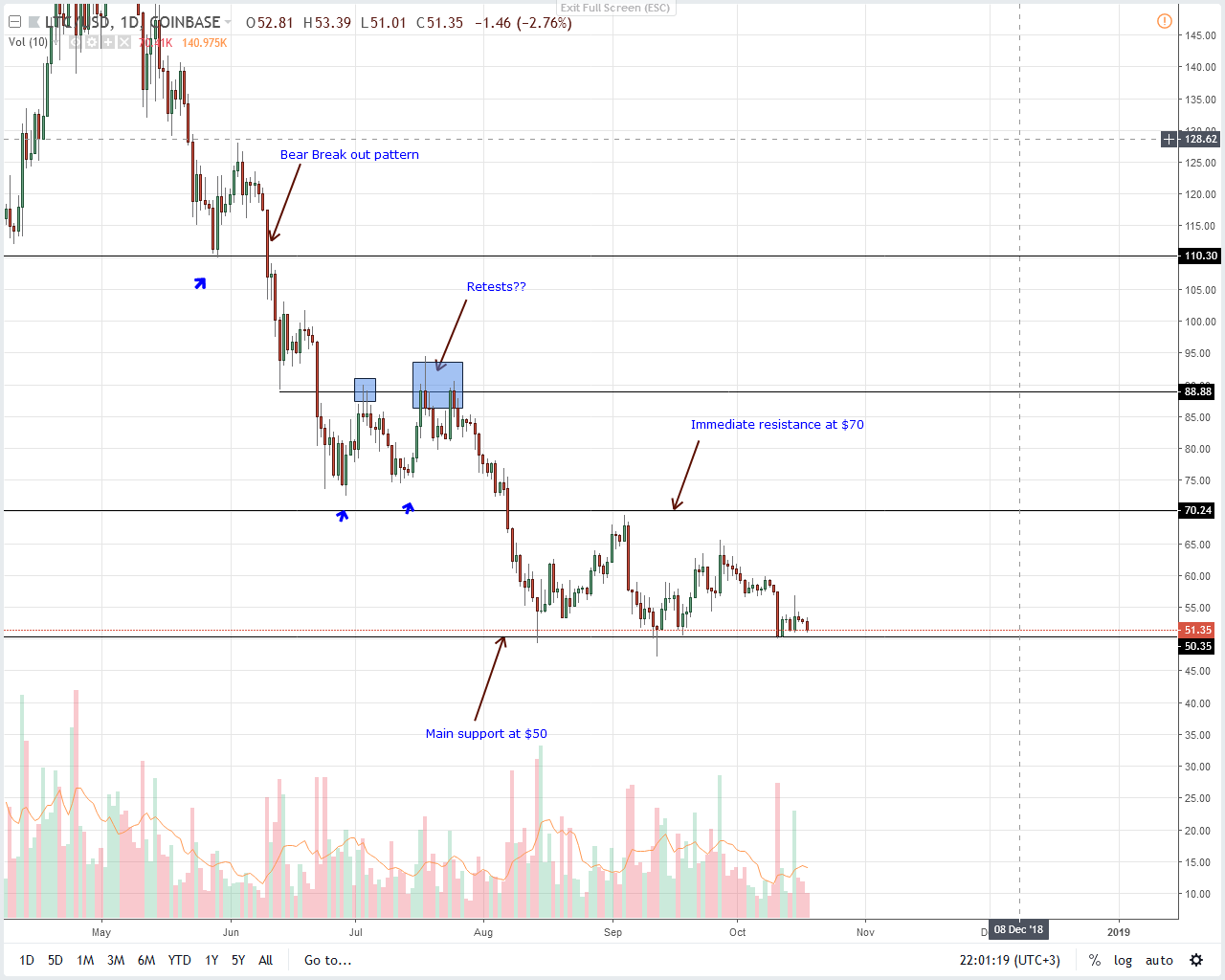 The coin is down nine percent in the last week and down three percent in the last day. And as they move within a $3 range with caps at around $55 and $50 main support, risk averse traders should take a neutral stand while risk off traders can ramp up on every drop in lower time frames with stops at $50 and first targets at $70 in line with Oct 15 high volume bull bar. Note that any decline below $50 cancels this bull projection. Once it happens, it’s likely that LTC shall drop towards our ideal first bear target at $30. 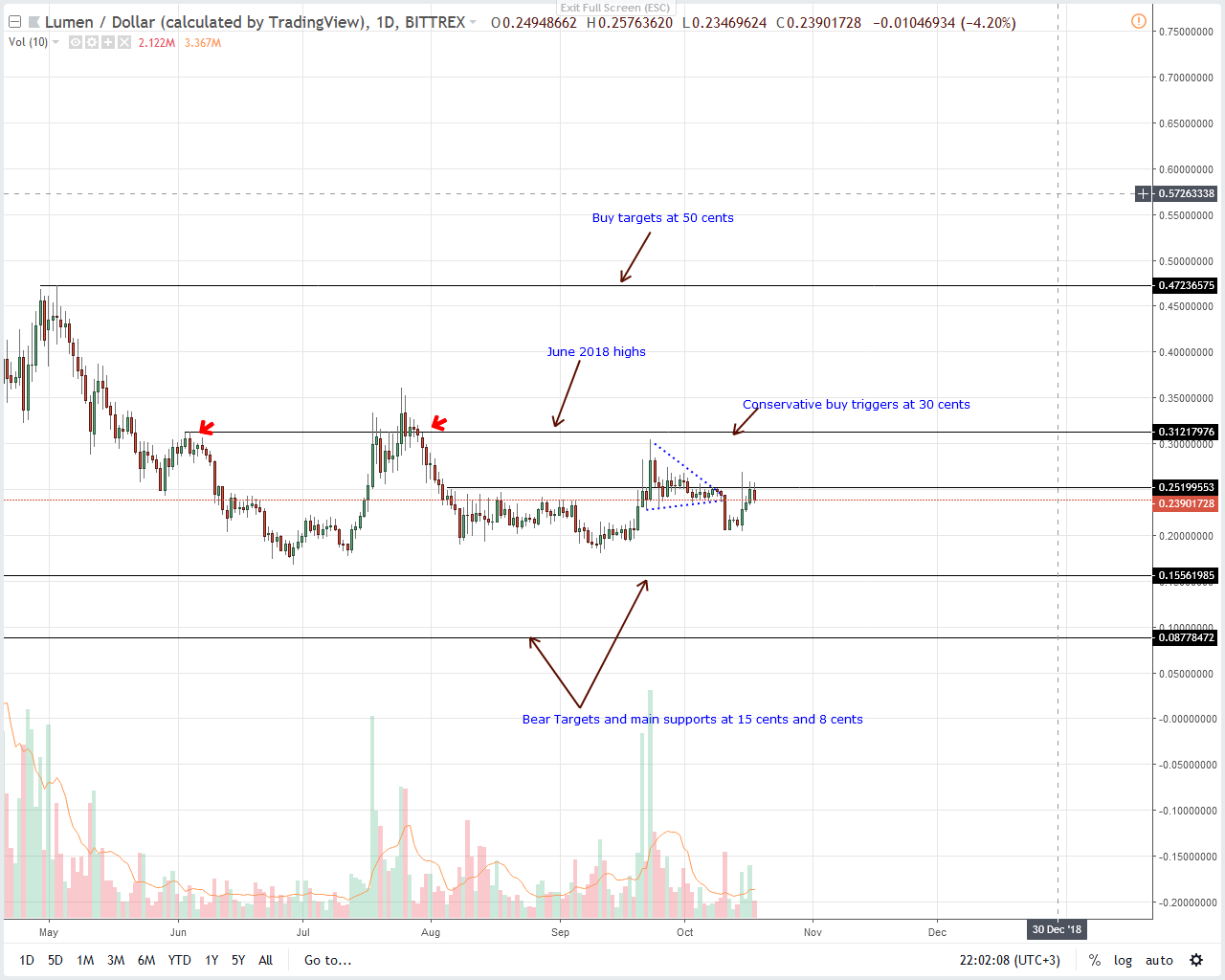 At the back of strong performance, the slow down in XLM prices is an opportunity for traders to add to their longs. Stellar Lumens prices are down four percent in the last day reversing week over week gains as XLM as sellers set to damp bull momentum bouncing off the main support line at around 20 cents. If anything, we remain upbeat on price and as prices continue to range as yesterday, risk-averse traders can load with first bull targets at 30 cents. Fitting stops should be at around 20 cents just like in our previous Stellar Lumens price analysis. Moves above 30 cents or Sep highs is inviting for risk-averse trader aiming for 50 cents and higher.

After days of suspension, Tron is now affirming their partnership with Baidu. Baidu is China’s Google and together with Tron they shall “cooperate on cloud computing resources” and not on a blockchain level as widely expected.

Because of this, Tron will be paying to use Baidu’s cloud computing resources and cooperate on driving mass adoption of blockchain. Baidu on their part, ODaily reports indicate, plan to unveil their Blockchain Commercialization Super Partner Plan v1.0. 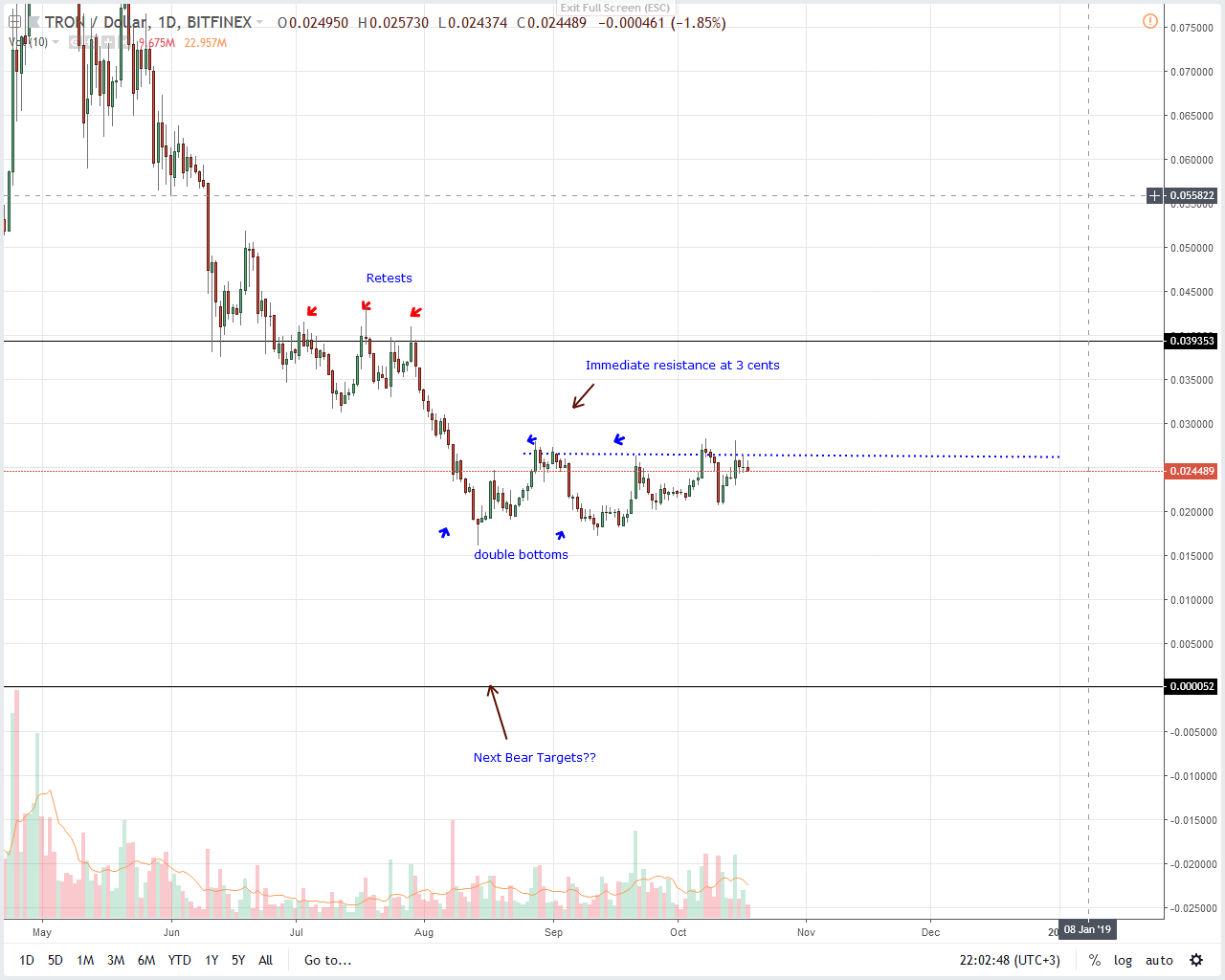 Regardless of the hype around this partnership, prices are constant. In fact TRX is pretty stable in the last day. A stand out though is the lack of momentum to drive prices above Sep 2018 highs at around 2.8 cents-3 cents triggering buys aiming at 4 cents. However, since the market are fundamentally bullish as prices try to recover from 90+ percent drops from 2017 highs, it’s likely that this move may print today. Therefore, we suggest traders to load at spot with stops at Oct 15 lows.

$XMR Monero v8 upgrade is a huge success. Bulletproofs are enabled reducing transaction fees significantly. Here is me sending $10 for 0.7 CENTS. You have to be bullish on this. pic.twitter.com/DXrRKPU7tV

Many online commentators are comparing this hard fork to Bitcoin Segwit because the general intention with the for is to reduce transaction sizes from 13.5 kb to 2.5 kb reducing transaction fee in the process. 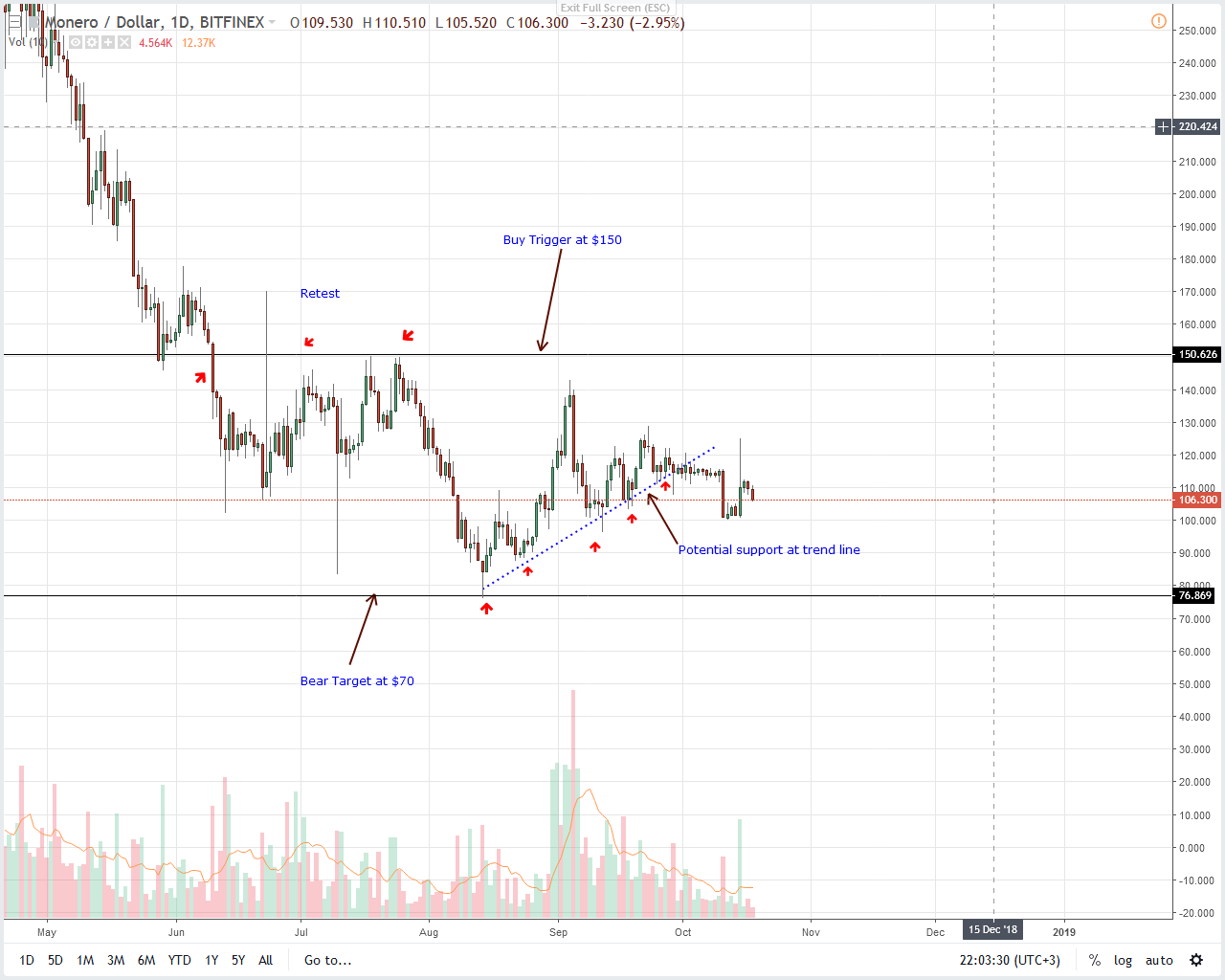 Price wise and Monero is literally unresponsive. Unless otherwise, expectant bulls should begin adding to their positions with first targets at $150 and stops at Oct 15 lows at $100. But, to sync with our previous Monero trade plan, conservative traders stand a chance to profit if they wait for solid moves above $150 as by then bulls would have shaken off sells of week ending Sep 23 and reversing the bear break out pattern of early June.