Bitcoin Price Analysis: Time to Grab some Bitcoin at any Price, First Targets $8,500

Traders should mark Oct 22 as a turning point for Bitcoin. Thanks to CFTC giving the ICE the permission to launch Bitcoin Futures and the rumors of SEC approval of Van Eck Bitcoin ETF approval, investors are vibrant. Because of this, it’s likely that Bitcoin shall rally confirming the break out patter of week ending Oct 22.

Yesterday was a pretty solid day for Bitcoin and cryptocurrency investors. From the announcement that the Intercontinental Exchange (ICE), the operators of 12 exchanges including the New York Stock Exchange which is the largest of its kind in the world, through Bakkt will be listing and allowing trading of Bakkt Bitcoin (USD) Daily Futures on December 12 to boosting rumors that all is well between Van Eck, SolidX, the CBOE and the US SEC.

Before these news made waves, Bakkt approval  was a source of speculation with many confident that the green lights from the CFTC and allowing Bakkt to roll out Bitcoin futures complementing those from the CME and CBoE would strengthen the case for Bitcoin ETF approval. The entry of Bakkt is indicative of a new wave of global adoption and the release of a pent up demand which was sealed by the reluctance of the SEC to come clean on Bitcoin ETF. As a matter a fact, the US SEC has been on a dismissal run rejecting nine different attempts by firms and exchanges proposing Bitcoin ETFs.

However, according to “insider reports” the exit of Kara Stein in December paves way for Allison Lee, a crypto supporter. Together with other commissioners as Elad Roisman and Hester Pierce, Van Eck and SolidX Bitcoin ETF proposal might see light by December igniting the next wave of bulls likely to propel prices upwards of $20,000. 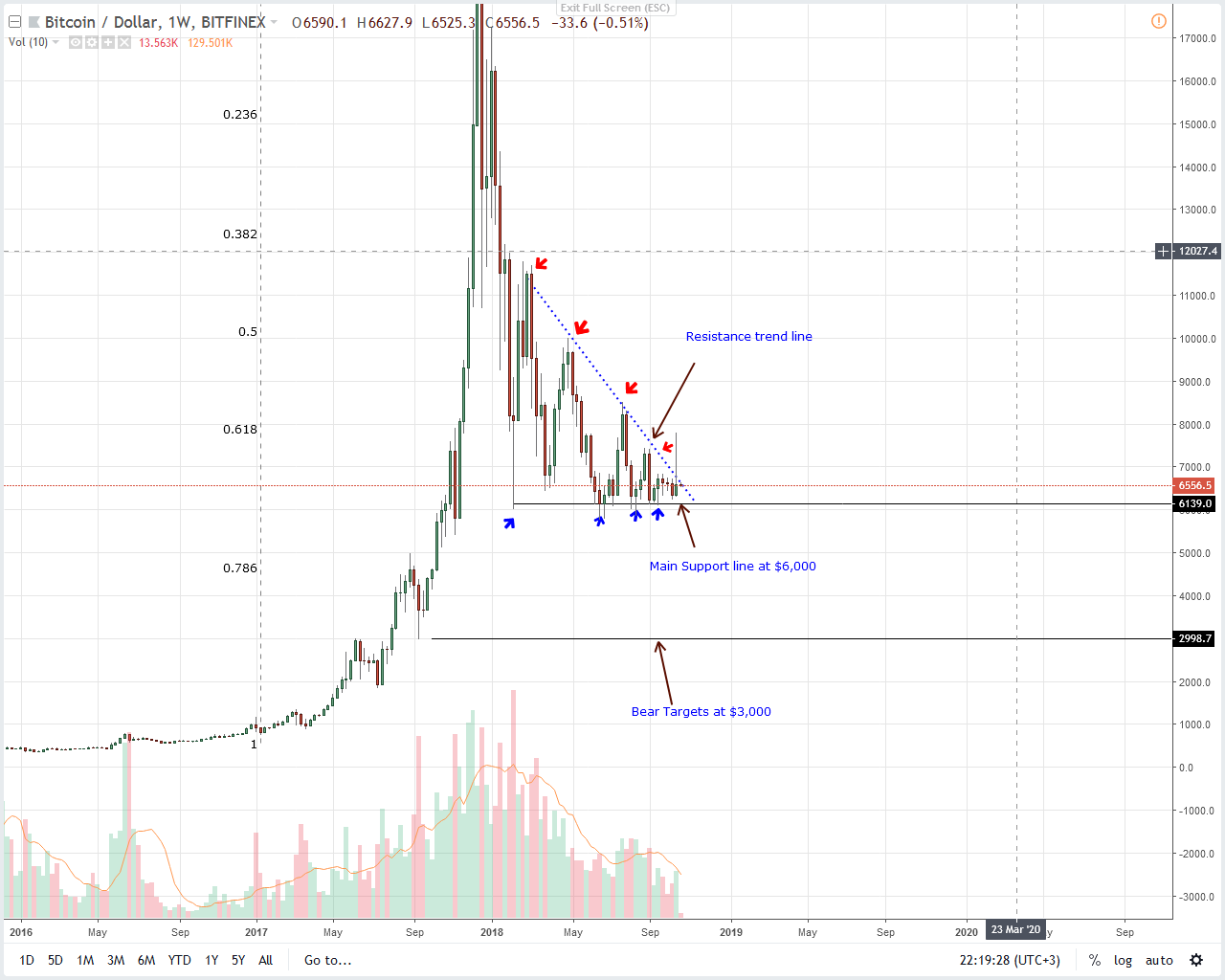 On a weekly basis, Bitcoin is relatively stable and is down three percent. But, this is the undervaluation that traders should be taking advantage of if the recent Bitcoin ETF rumor and the launch of Bakkt Bitcoin Futures is anything to go by.

Considering a market that has been consolidating for the better part of the year with clear supports and resistance lines, we recommend trading according to last week’s trend definition. Though prices temporarily raced above $7,200 triggering our buys, the subsequent declines stopped longs meaning we are net neutral but bullish on Bitcoin.

However, in lower time frames, we suggest taking longs on every dips as long as Bitcoin is hovering above $5,800 to $6,000 support zone. 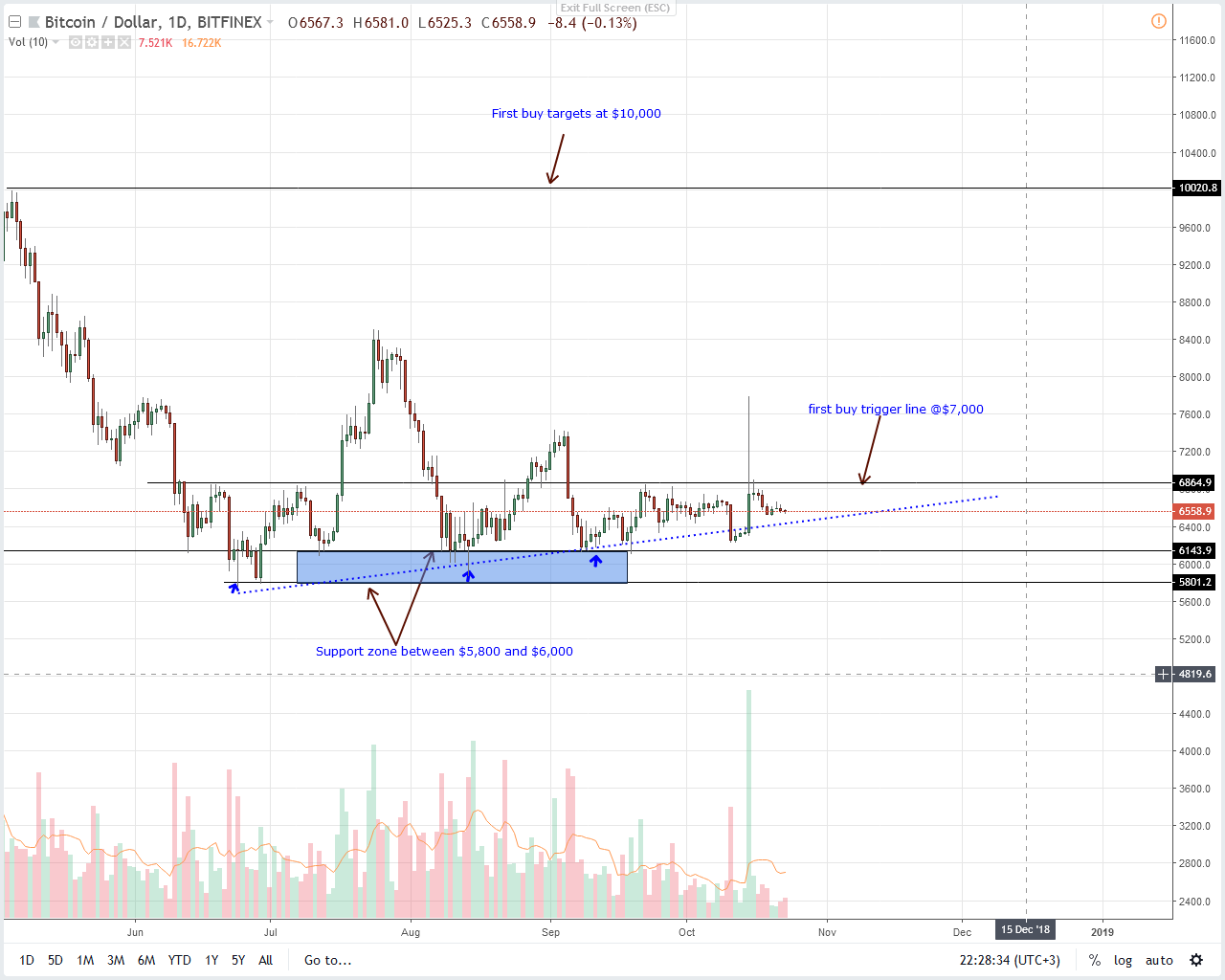 The stability in the weekly chart is clear in the daily chart and here we notice that prices are trending within a tight $300 range with supports around $6,500. Because of our bullish expectation and the general realization that Bitcoin might explode after sinking more than 80 percent from 2017 highs, we suggest buying on dips in lower time frame with stops just below the $6,000 support line.

That is just below Oct 15 highs and a bar in which prices are still trending in. In line with our previous Bitcoin price analysis, first targets will be at $7,200 and later $8,500 assuming momentum continues to build up.

Tags: bakktBitcoin ETFbitcoin futuresBitcoin price analysisCBoElatest bitcoin newssecsolidxVan Eck
TweetShare
BitStarz Player Lands $2,459,124 Record Win! Could you be next big winner? Win up to $1,000,000 in One Spin at CryptoSlots