As 2019 looms, analysts have sought to discern where the crypto market could be heading next. While bearish sentiment is still a common sight, a growing number of industry pundits have overtly expressed their opinion that 2018’s crypto winter is on the verge of kicking the bucket.

Although bears regained control of the crypto market on Thursday morning, reports, which cite a number of analysts and indicators, claim that a bullish picture is being painted for Bitcoin and its altcoin brethren.

Bloomberg’s Vildana Hajric noted that the moving average convergence divergence (MACD) indicator pertaining to the Bloomberg Galaxy Crypto Index (BCGI), parented by Mike Novogratz himself, has “entered its first positive divergence in a month.” While a single indicator shouldn’t be the sole influence behind one’s investment decision, in the past, BCGI’s move from a negative to positive divergence has been a precursor to BTC rallies. 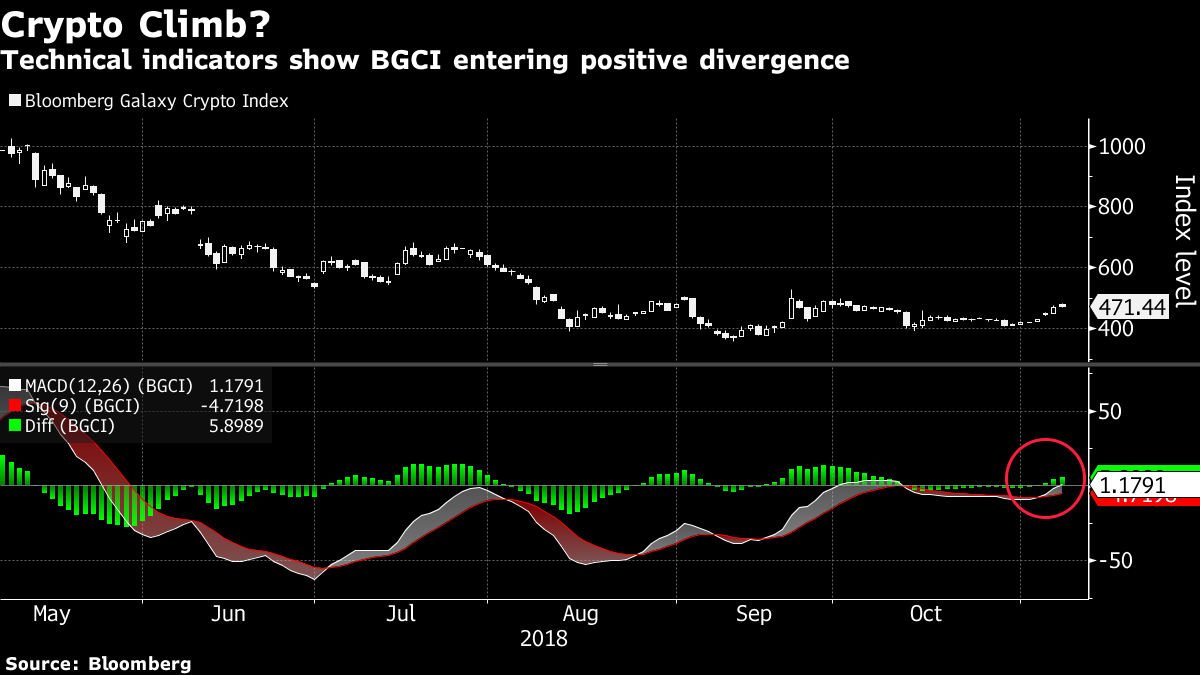 This analysis lines up with Hajric’s previous crypto call, in which she noted that the Directional Movement Index (DMI) indicator is signaling for Bitcoin (BTC) to head higher. More specifically, DMI, a popular indicator of the trend strength of a publicly-traded asset, has reportedly “entered a new bullish phase,” just like MACD.

Mati Greenspan, a senior market analyst at eToro, was in consonance with Hajric, with the long-time Bitcoin trader explaining to Bloomberg that “the technicals [in this market] look great,” which may be the harbinger of crypto’s next bull run.

Keeping in mind that technicals are far from the full picture, Greenspan noted that the “fundamentals are fantastic.” While this comment was vague, the analyst seems to be pointing to the impending launch of the Intercontinental Exchange-endorsed Bakkt, which will offer the industry’s first physically-backed BTC futures, along with other platforms poised to make a positive impact on the future of the crypto market.

The eToro market specialist could also be alluding to the growth of crypto’s underlying ecosystem. ConsenSys-backed MetaMask, for example, recently breached its 1.3 million user milestone, further cementing the thought process that Ethereum remains a popular platform, even amid tumultuous market conditions. In terms of the institutional side of crypto’s coin, the likely catalyst behind Bitcoin’s next leg upwards, research done by Alex Kruger indicates that institutions remain enamored with digital assets. Per his calculations, an estimated $5.9 billion entered this market from the pockets of Wall Street bigwigs.

To wrap up his comments into a dainty bundle, Greenspan, touching on his years of experience in legacy capital markets, noted:

“All signs are pointing to a Santa Claus rally in the cryptocurrency market.”

Mati’s call for a “Santa Claus rally” comes just days after Rand, a prominent digital asset trader and analyst, pointed out that this market has already broken out of a near-year-long falling wedge, which is a move of great importance. Rand, taking his astute analysis into account, then alluded to the fact that crypto could finally be undergoing its reversal phase, making it more than logical to assume that further rallies to the upside could be in the cards.