Next Article: Report: Crypto Market To Consist Of 66% Bitcoin in 2019

The Bitcoin Cash price continues to record new yearly lows, currently trading within its fifth consecutive session in the red.

The BCH/USD rate has dropped below $120 in the latest sell-off, noting more than 97% depreciation since its all-time high.

Since November 7, when the pair was trading at $638, it has tanked more than 81% in value. In comparison to other cryptocurrencies that also established their yearly lows recently, the price plunge in the Bitcoin Cash market is more severe. 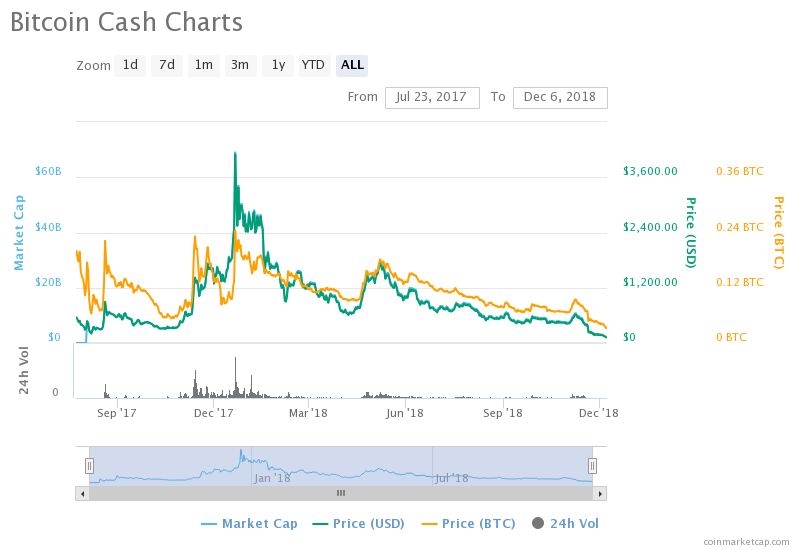 The reason why investors are finding it difficult to hold onto their Bitcoin Cash is lack of confidence in the Roger Ver-led team.

Following months of discussions over the future of the Bitcoin Cash project, the community decided to split the blockchain to upgrade its core protocol.

There was also a section led by nChain founder Dr. Craig Wright and online gambling billionaire Calvin Ayre that revolted against Ver’s Bitcoin Cash upgrade plans. They decided not to support the hard fork and announced that they would launch their separate Bitcoin Cash chain.

Both of the groups waged a so-called hash war against each other to claim the original BCH ticker. In a hard fork, a community votes with hash power. The chain which receives the maximum hash power from the mining community becomes the longest chain among the two resulting chains.

In their efforts to prove dominance, both Ver and Dr. Wright arranged surplus electricity to mine on their respective chains. In the initial stages, both of the sides were dealing with half a million worth of losses in power consumption. By November 21, Bitcoin SV, in particular, had raked in losses of $2.2 million.

The entire episode damaged the rest of the crypto market, especially Bitcoin whose hashing power was unilaterally allocated to the Bitcoin ABC blockchain.

While ABC emerged as a winner over the competing SV chain, even a combined Bitcoin Cash-ABC cap couldn’t recover from the damages their markets had faced. Investors who left Bitcoin Cash are showing no interest in coming back to it, while Bitcoin’s dominance in the crypto market is going up at the same time.

What’s Next for Bitcoin Cash?

The Bitcoin Cash market is now moving into a bottomless abyss – a kind of death spiral – with no signs of investment confidence improving.

To say it will be dead would be too much, for Ver and his team would not see their billion dollar project turn to ashes. The market would need an aggressive bull whale to buy in at new dips to revive good confidence. Ver, in one of his press statements, looked bullish despite the negative turnover.

“As a self-proclaimed fundamentals investor, I believe that the long-term the future is brighter than ever for cryptocurrencies,” he told Bloomberg. “There is more awareness, more adoption, and more stuff happening all over the world.”

If only promises could comfort!