Over the last four years, the European Central Bank has managed to inject  €2.6 trillion into the banking system in order to maintain economic stability.

To be clear, these cash injections have been one of the only things propping up the economy, and even the Governor of the ECB has now admitted that.

Now, €2.6 trillion may not sound like a lot of money but we need to consider that this money is then multiplied by the fractional reserve banking system with each Euro created then being lent out multiple times. So the actual amount of money that went into the system is much higher.

Here we can see the level of M3 money in the Eurozone going from less than €10 quadrillion to more than €12.27 quadrillion in just four years. 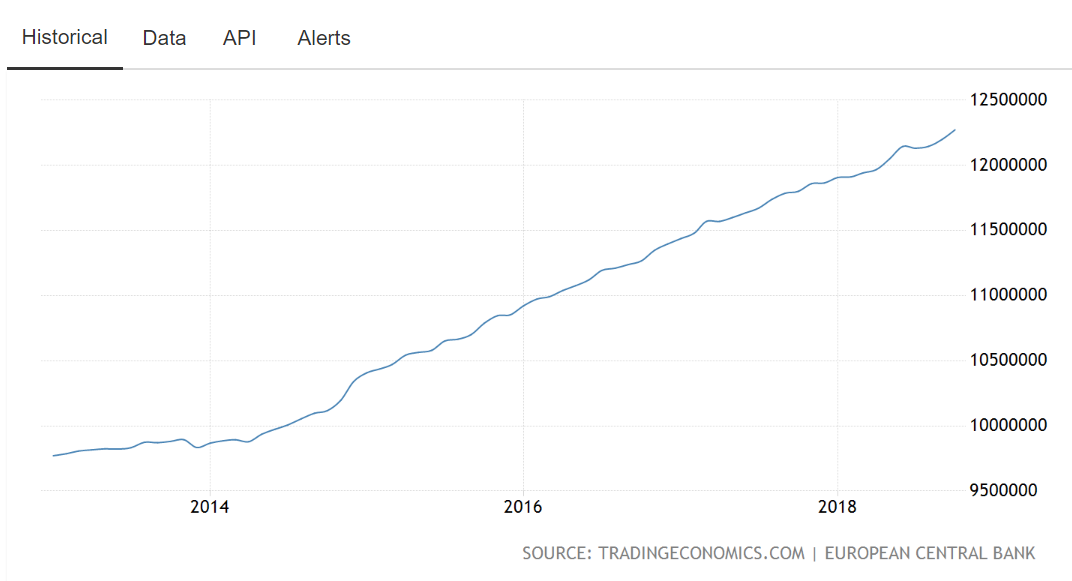 Yesterday, the ECB announced that they will stop injecting new money into the system. In the United States, they are already starting to extract money by allowing the bonds they’d purchased to lapse. In Europe, they’ll be renewing their bonds for now.

So, for those of you reading these daily updates and wondering what monetary tightening is, this is how it works and it is having a massive impact on the markets.

Please note: All data, figures & graphs are valid as of December 24th. All trading carries risk. Only risk capital you can afford to lose.

Stocks declined during the New York session yesterday. There were a bunch of headlines about a possible government shutdown but that’s probably not the catalyst for falling stocks. Just a sideshow distraction.

As we mentioned above tightening monetary policy is the driver here. During most of the year, stock bulls were able to say that the economy is still doing very well, but unfortunately, they don’t even have that leg to stand on anymore.

The US jobs report last week was dismal and the GDP in Q3 was a clip below the national average.

Things didn’t get much better in the Asian session either. Chinese investors drank their morning coffee reading headlines like this…

To put the numbers into perspective, here is a graph of China’s industrial production since the crisis.

…and here is one for the retails sales. These are the lowest figures in more than a decade. An outright shock for economists whose forecasts were already low.

As you can probably imagine, the entire global stock markets are in risk-off mode by now.

In line with the risk-off mood, it’s likely that many traders are moving to cash. This could be the reason the US Dollar is testing new highs at the moment.

Here’s the graph we’ve been tracking that shows a rather clear ascending triangle for the US Dollar index. Definitely looks like a breakout pattern.

Similar to what we saw in August, the emerging market currencies are getting the biggest wallop. Here we can see the Lira, Rand, and Peso getting bucked.

At this point, only the Japanese Yen is a bigger safe haven but only slightly.

To say that I’m bullish on bitcoin is an understatement, but even my extreme optimism is overshadowed by some of the other analysts in the industry.

As much as I respect Mr. Lee and appreciate his view, the above headline did raise a few alarm bells in my head.

In my personal philosophy, the market is never wrong. Fair value is what someone is willing to pay for it. I can understand how using metrics to try and determine what the price of an asset should be can be helpful. However, if nobody is willing to pay that amount, then it isn’t the correct value.

During the interview, Thomas even went as far as trying to reverse engineer his own calculations showing how given the current price of bitcoin, there should be far fewer active wallets. This thinking sounded a bit silly to me as well.

Sure, I believe that bitcoin can grow in value very quickly. After all, there is an extremely limited supply. But for that to happen demand needs to pick up first.