Justin and Vitalik often throw shade at each other. It is normal, and as long as the two platforms are competing for developers, jabs will continue. The center of contention between these two maverick founders seems to be throughput and cost of transaction. On numerous occasions, Justin has been insisting that his platform is the best, can scale and is cheap to transact on. Besides, it has worked around the corner allowing dApp developers and other users to roll out TRC-10 and 20 tokens in an easy to follow procedure.

Partly because of this and their acquisition of BitTorrent, the platform has seen its user base exponential grow even surpassing that of Ethereum. In one short year, the number of users blew past the one-million mark. Though its token valuation has been dismissive, its performance from the development and acquisition front has been impressive. Because of this, we retain a bullish outlook on Tron.

In comparison,#Ethereum reached 1 million accounts on Jan 22, in 542 days or 18 months since #ETH Mainnet Launch

It’s going to be rosier especially if we see mainstream adoption in 2019 whereby corporations realign and make use of immutable solutions offered by the Tron blockchain. However, the failure of Ethereum to implement scaling solution will see its position as a go-to platform wane allowing Tron and similar dApp sites to dominate. 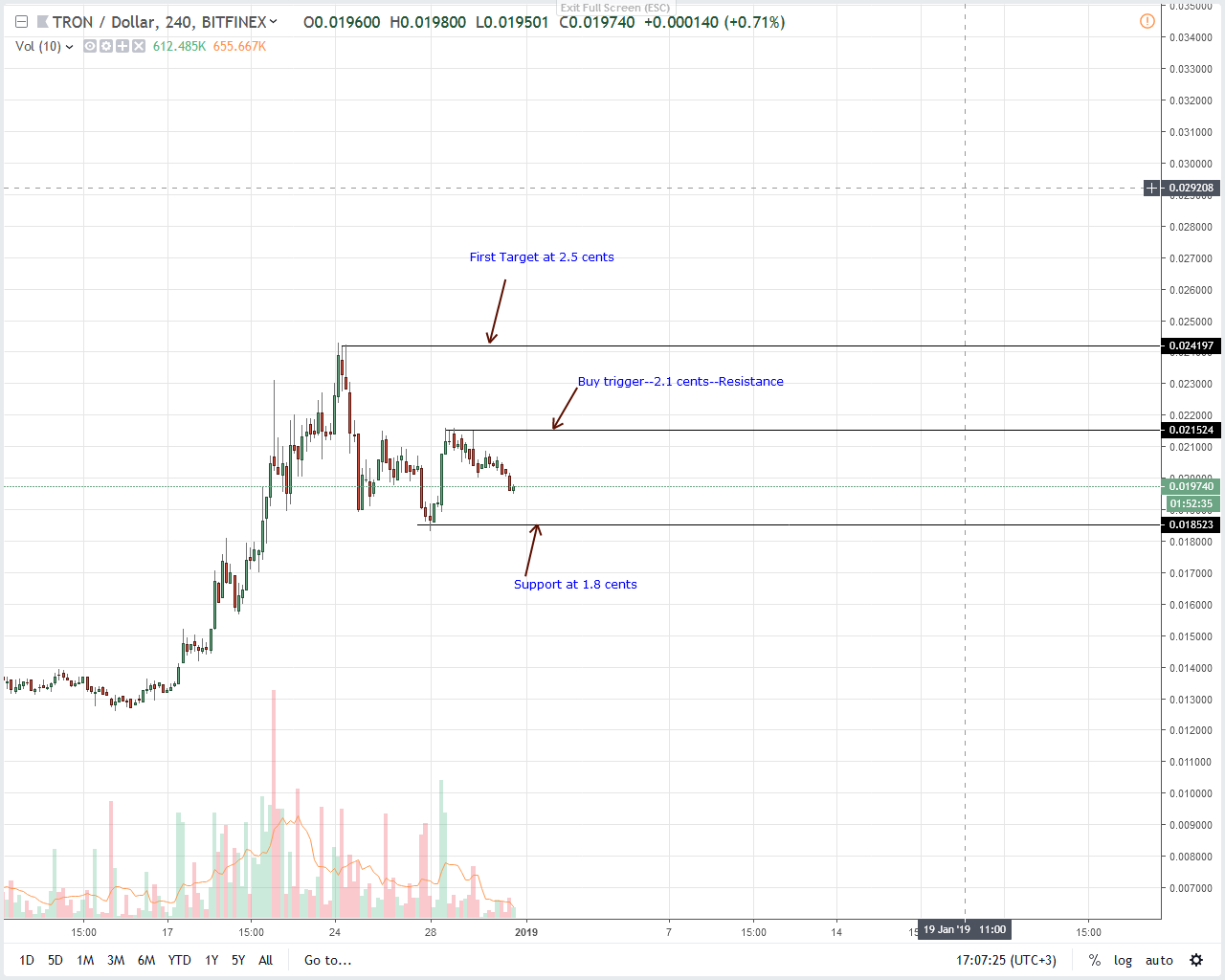 From a top-down approach, TRX is bullish. Though it is down eight percent against the USD in the last week, the decline in price is another opportunity for traders to load up on every dip with first targets at 4 cents or higher just like we had mentioned in previous trade plans.

At spot prices, TRX is stable and trading within week ending Dec 23. As it is, there is an opportunity for more upsides, and the best approach is to search for buying opportunities in lower time frames. Notice that not only is the buying trend strong, but TRX is trading within a bull flag with support between 1.8 cents and 1.9 cents.

Our level of interest is Dec 28 highs at 2.1 cents and bulls would be in control if prices surge past this level. On the reverse side, TRX would collapse towards 1.2 cents if prices tumble below Dec 27 lows of 1.8 cents.

Our short-term TRX/USD trade plan is as follows: