With a market cap of $1.617 billion, TRX is liquid, and the company behind it is expected to reflect its valuation. However, their handling of the Accelerator program has drawn criticism. Regardless, TRX prices are bullish and could retest 4 cents by the end of this week.

Just when the community was in the brink of forgetting the Tron’s White Paper plagiarism, Tron accused of mismanagement and prize winner non-payment. Unfortunately, this is also on top of talks of deliberate prize pumps in the lead up to Tron Accelerator Program conclusion where the Tron Foundation promised to pay $1 million to prize winners.

From what we can glean from program attendees, Tron has a history of not paying up winners who have to contend with slashed rewards. That’s beside rewarding clones, allowing private projects to win—those that aren’t open source and worse changing prize money in the last minute. A Redditor said:

“Naturally not everybody is as polarized as the r/cc Reddit, but there is some very factual stuff like how the contest prizes were changed last minute. Obviously, the rest is speculation, but considering others said Tron Foundation did something similar in a previous contest where a dev on the Tron payroll won first prize, I think it’s important that people are aware so that we can ask for more transparency and a public list of all winners from Tron Foundation IN CASE there is something shady going on.” 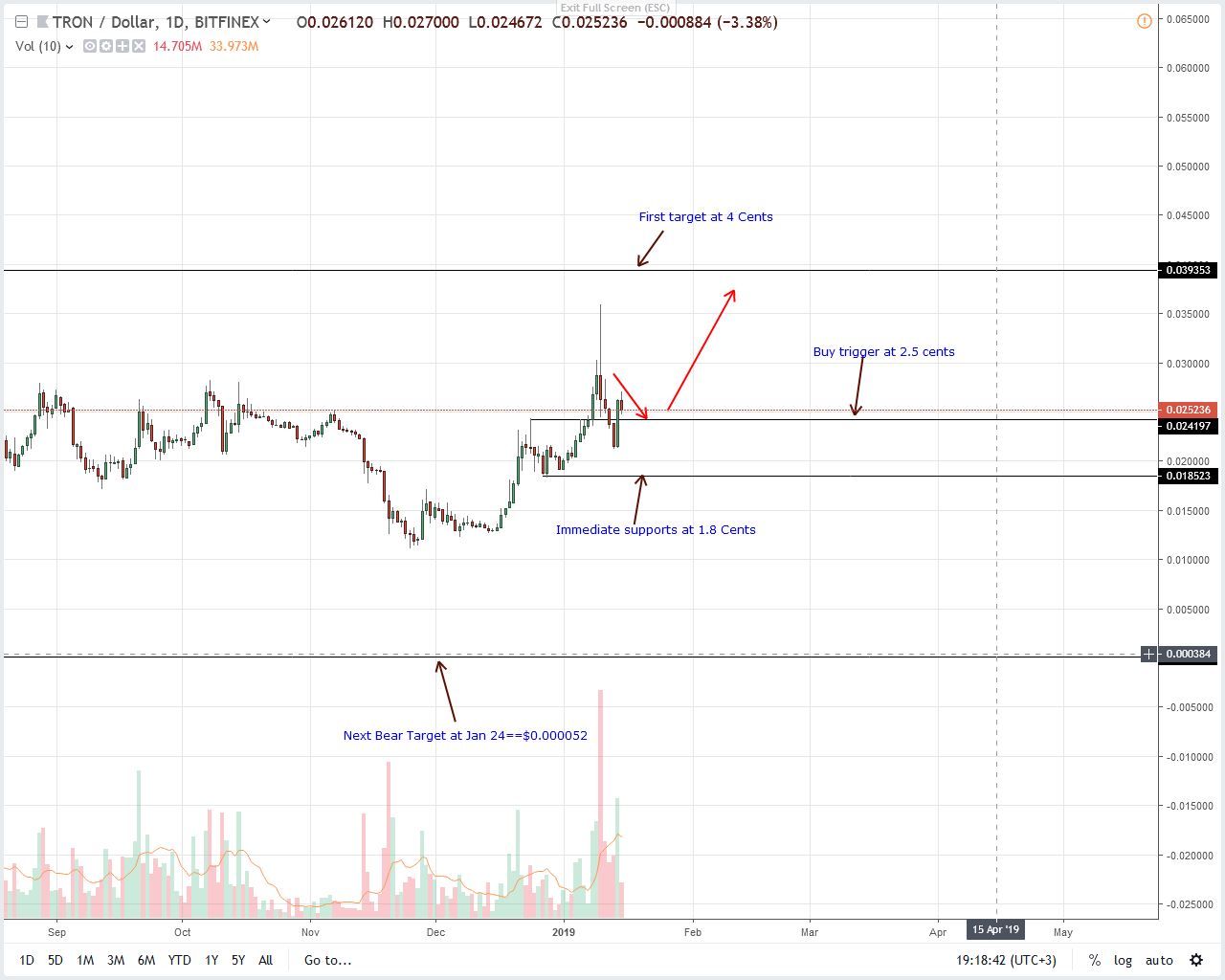 At prevailing rates, TRX is up 1.8 percent against the USD. Its market cap is also up at $1,604 million and roughly $300 million away from replacing LTC as the eighth most valuable coin. Everything else constant, bulls appear to be in charge and to sync with our last TRX/USD trade plan, both set of traders should buy at spot prices with first targets at 4 cents. Not only is this confirming the double bar bull reversal pattern of Jan 13-14 but will be aligned with the general pattern set in motion by late Dec, early Jan 2019 rally.

No doubt, Jan 10 volumes were high and even though Jan 14 followed suit printing 50 million versus 35 million averages by close, subsequent bull bars more so those reversing Jan 14 bar should be pumped by volumes exceeding 50 million and even above 100 million as those of Jan 10. Current average stands at 33 million.