Crypto Exchange Volumes Drop to Lowest Levels For Over a Year

Next Article: Facebook Takes Another Step Closer to Cryptocurrency

As the crypto winter deepens with no sign of a recovery on the horizon contractions have been occurring across the industry. The two notable signs at the moment are shrinking exchange volumes and a drop in crypto related Twitter activity.

Trade volumes across all of the major crypto exchanges have plummeted back to levels not seen since 2017. According to research by Diar, exchanges could be set to enter a new plateau as volatility dwindles and markets cool off. So far 2019 has been particularly quiet has crypto markets pulled back in January.

The research added that Binance, the world’s top exchange by reported volume, has seen its worst period for well over a year as the Bitcoin/USD market has been slashed 40% since December 2018. According to Coinmarketcap.com Binance volume is currently at $640 million which is way down from the billions traded on the exchange this time last year.

Binance is not the only exchange to suffer. Coinbase has also recorded its lowest month since May 2017 as trade volume plunge amid a deepening bear market. OKEx is another one that has lost out with the reversal of a three month growth trend as volumes shrink. Gemini has shown a similar pattern to Coinbase as the declines are extended. 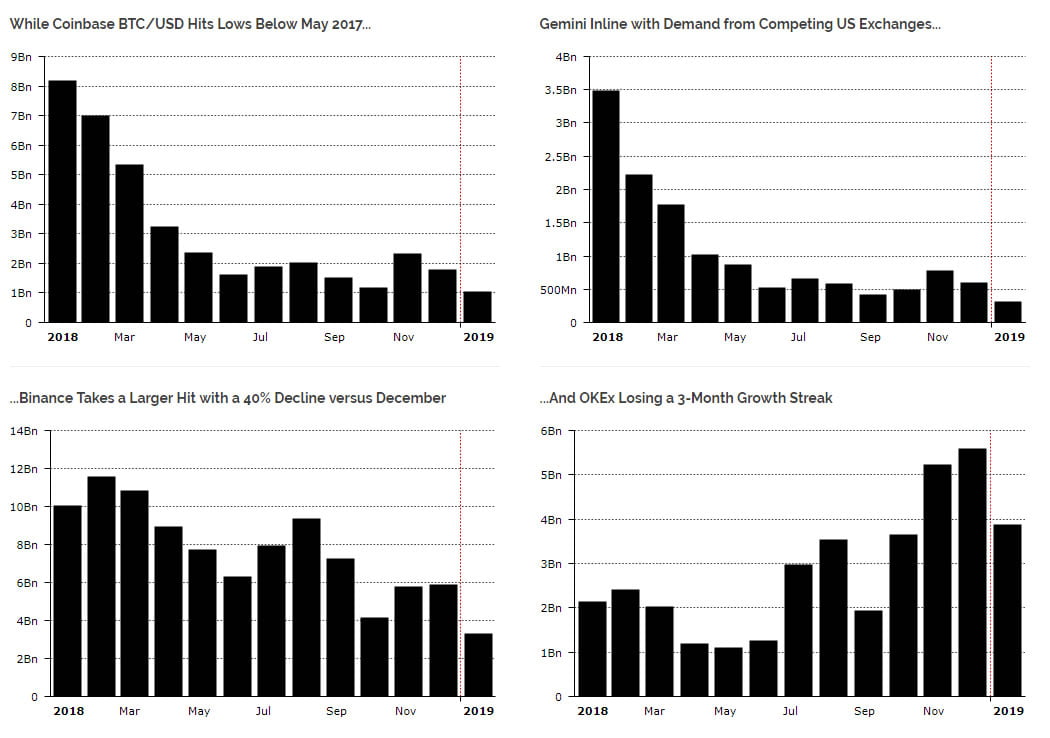 There have been several reports last year of fake volumes on some of the major crypto exchanges but there is no denying that figures have shrunk across the board over the past year.

In addition to the drastic drop in exchange volumes has been a decline in crypto related activity on Twitter, which has become the standard social media platform for the industry. Prominent crypto analyst Murad Mahmudov has observed that Bitcoin related tweets have dropped to levels back in 2014. He added that this was an extremely bearish sentiment which backs up claims that the crypto winter is far from over.

Murad has made a number of price predictions with the most recent seeing a dip to $1,700 for Bitcoin by the middle of the year. This would provide a key level to accumulate and a trend reversal has been predicted for the latter half of 2019 when the bear market final comes to an end.

The decline in Twitter activity and exchange volumes are unsurprising considering that markets have collapsed by over 80% over the past 12 months.

Crypto Exchange Volumes Drop to Lowest Levels For Over a Year was last modified: February 5th, 2019 by Martin Young

Read More
Tags:BinancecoinbaseexchangeGeminiOKExtwittervolume BitStarz Player Lands $2,459,124 Record Win! Could you be next big winner?
Next Post