JPM Coin is a bank-issued coin, but it will fail if we factor in Brad Garlinghouse analysis. A synergy is mandatory, and Ripple’s InterLedger Protocol can solve their need. Meanwhile, XRP prices are down and trending inside Feb 8 high–low.

Back in 2017, David Schwartz, Ripple’s Chief Cryptography officer conceded that it would be years before banks adopt distributed ledger technologies. Backing his reasons were scalability and privacy issues. That was then, and right now, we have a new contestant in the sphere—JP Morgan and Chase backed JPM Coin, a stable coin that will serve three functions: eliminate locking of capital in foreign accounts, facilitate inter-bank settlement and be used by the bank for securities transactions. Because these coins are bank-issued, Brad Garlinghouse says they will fail. In a LinkedIn post he says:

“A bank-issued digital asset can only really efficiently settle between the banks who issued it. Then, two scenarios can play out. Scenario one: all banks around the world put aside competitive and geopolitical differences, adopt the same digital asset, agree on its rules, and harmoniously govern its usage. Fat chance. Scenario two (the more likely scenario): banks not in the issuing group issue their digital assets with their own sets of rules and governance.” 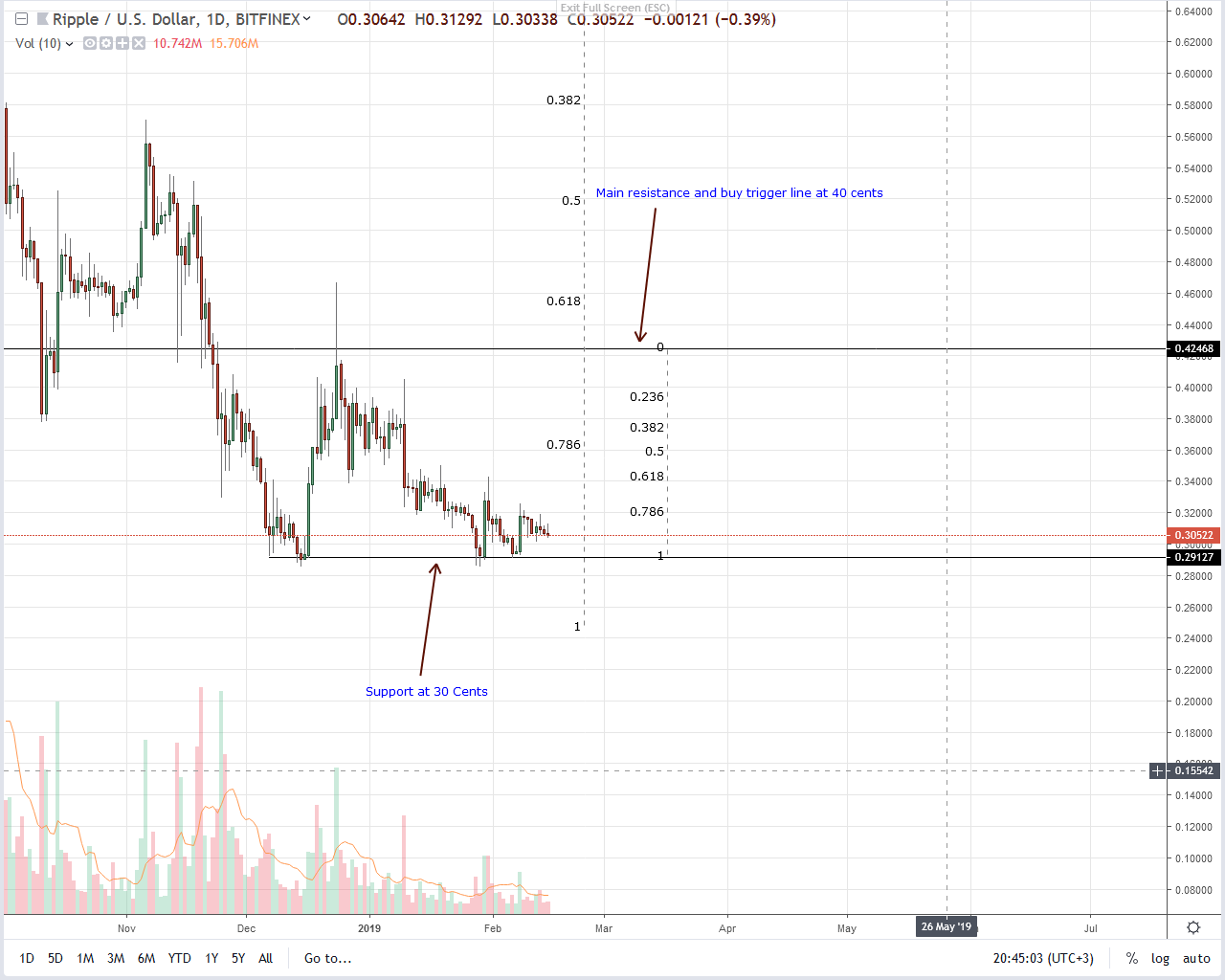 At the time of press, each XRP was changing hands at 30 cents, and this is the seventh straight day of low-range, low volatility price action. Aside from upswings of Feb 8, Jan 30 and those of mid-Dec, the simple fact is that Ripple (XRP) prices are still moving inside Feb 8, high-volume bull bar. That is very bullish.

From a top-down approach, prices are oscillating inside Sep 2018 bull bar, placing bulls at a vantage point. All in all, our last Ripple (XRP) price analysis is valid, and with clear buy triggers at 34 cents, trend continuation is dependent to the levels of market participation and resultant range that will propel prices from current lows.

Volumes are low—averaging 15 million. That pales in comparison to those of Feb 8—at 35 million or Jan 30—at 49 million. Ripple (XRP) will only be bullish once a bull bar with volumes exceeding 49 million prints above 34 cents.