Prices are stable, and in preparation for institutional grade investors, Justin Sun has announced a hard fork on Feb 28. Several features will be added, and that may be the launching ground for TRX prices to expand above 3.1 cents as buyers take charge.

It’s a race, and as Ethereum prepares for a software upgrade to implement several EIPs, the co-founder of Tron, Justin Sun took to Twitter announcing Tron’s hard fork on Feb 28—a couple of hours after Ethereum upgrades.

A successful 3.5 hard fork will see Tron add four new improvements and a stand out is the “Multi-signature and Account management” feature specifically added for institutional grade investors expected to flow in via BitGo.

Sun in a Twitter post said “the Multi-sig, acct mng and custody are three major requirements from institutions. Recently we have received numerous demands from hedge funds, mainstream investors and financial institution.”

BitGo is based in Palo Alto California and offers custodial services for institutions. They will begin offering support for TRX later this year saying it was important as they are the “only institutional digital asset company with a full product offering, from high-volume wallet platform to regulated custody services.” 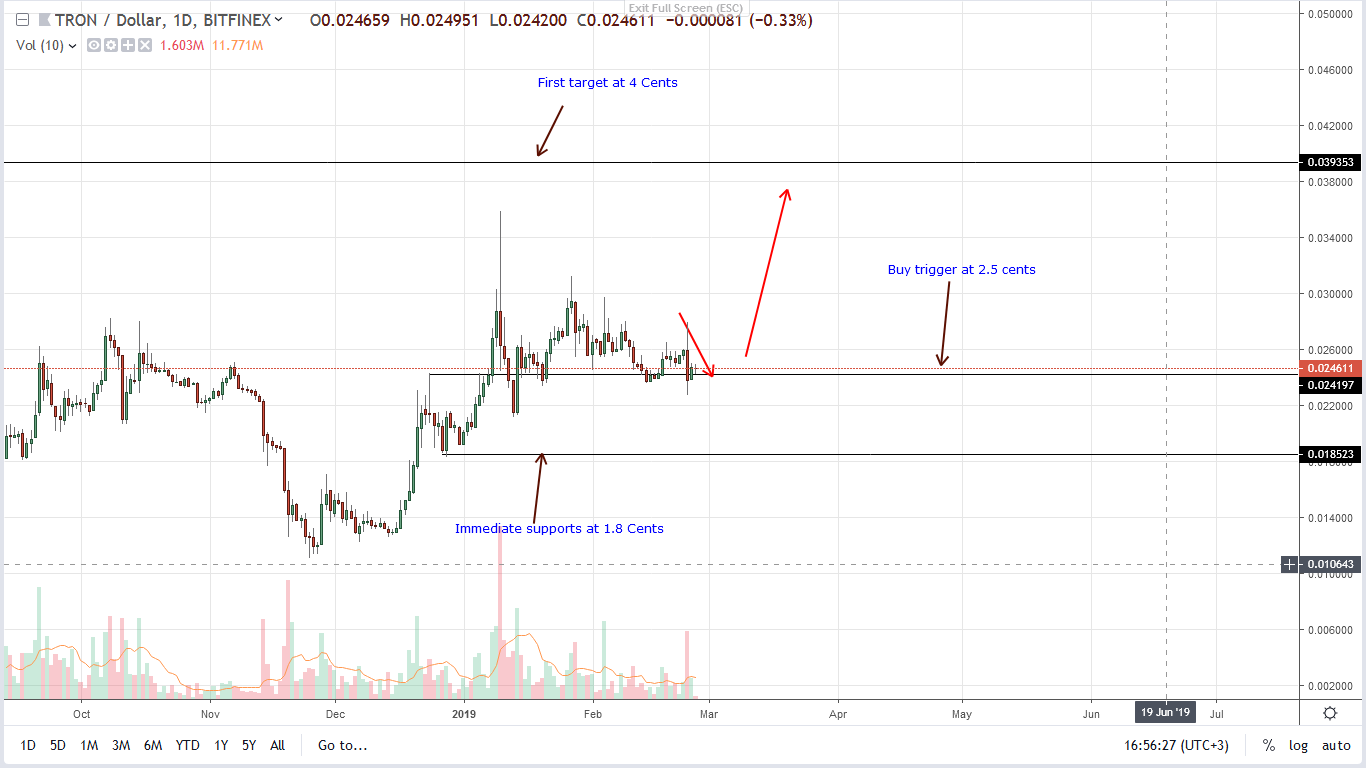 Two days before the hard fork and Tron (TRX) prices are stable. Like other digital assets, TRX is under pressure. It could collapse if there is a mishap during or after the scheduled hard fork or if BTC prices continue to slide.

All the same, our stand is clear, and TRX is technically bullish as long as sellers fail to drive prices below the double bar bullish reversal pattern of Jan 20-21. What is clear is that TRX prices are consolidating and with caps at 2.3 cents and 3.1 cents, risk-off, aggressive type of traders should buy on every dip in lower time frames with the first target at 4 cents and later 6 cents.

If there is a spring and prices rally above Jan 27, bulls should aim at 6 cents. On the other hand, any drop below 2.1 cents or Jan 14 lows invalidates our short-term bullish outlook. As a result, this will release sellers aiming at 1.8 cents and even Dec 2018 lows.

Feb 24 volumes were high—37 million. As prices oscillate inside its high low, bulls should build momentum for a breakout above 3.1 cents. Accompanying this surge should be high volumes exceeding those of Feb 4—42 million. Before then, prices appear to be accumulating above 2.3 cents—the breakout level. This is allowing risk-off traders to fine-tune entries in lower time frames.