Next Article: Why Crypto Is So Important For Privacy With HTC Exodus's Phil Chen

In a continuation of bullish events this week, total volume reached an all-time high of $89 billion on the 3rd April. This compares to $28 billion when Bitcoin was at its peak in mid-December 2017. However, with accusations of fake volume still fresh on our minds, as well as Tether showing a higher volume than Bitcoin, investors should tread carefully. 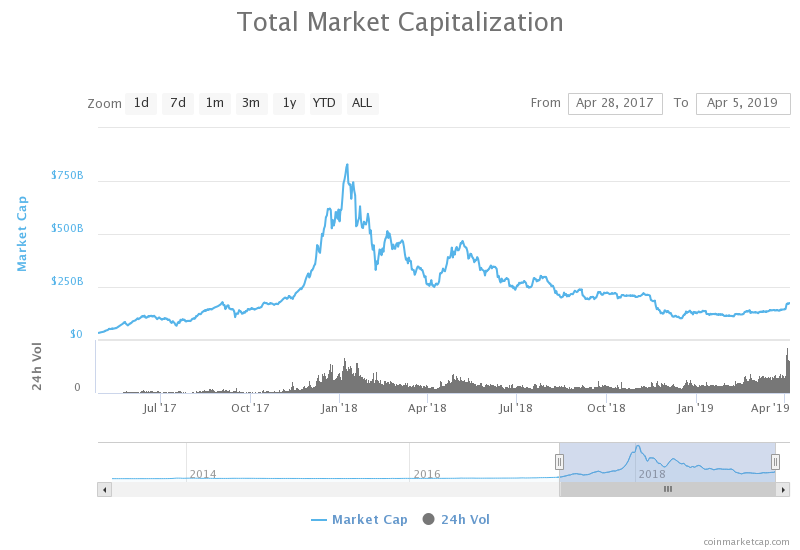 What Does Volume Tell You?

Volume relates to the value of transactions traded in the market at a given time. For each buyer, there will be a seller. And when both parties agree on a price, that transaction contributes to the total volume. It follows that high volume indicates high interest. But more than that, volume is an indication of market movement. On defining volume, Investopedia says:

“Volume is an important indicator in technical analysis as it is used to measure the relative worth of a market move. If the markets make a strong price movement, then the strength of that movement depends on the volume for that period. The higher the volume during the price move, the more significant the move.”

In consideration of this, many are interpreting all-time high volume as a positive change in crypto sentiment. But given recent reports of fake volume, it would be wise to exercise caution. Research conducted by Bitwise Asset Management showed that only ten exchanges, out of eighty-one analyzed, had any genuine trading volume. The rest consisted mostly of wash traded transactions to misrepresent activity. With that in mind, until authorities clamp down on wash trading, volume figures should be read with skepticism.

Dude, you really still trust in any of that reported volume?

Despite some controversies over the last year and a half, Tether is performing strongly. At the time of writing, it is the number one coin by volume, beating Bitcoin by almost $500 million. And it continues to be the most popular option for investors to move their crypto assets into stable form.

However, regardless of this, Tether has never managed to adequately address transparency concerns. In its white paper, there are details on “Proof of Reserves” backed by the US Dollar, this means that for every Tether in circulation, there is also $1 held on account. The problem is, no auditing firm has ever signed off on this claim. Matters are made worse by an apparent change in policy. The company now states that other assets may be substituted to make up that value — all without full disclosure on the nature of those assets.

Indeed, when Tether makes up a significant chunk of total market volume, warning signs should be flashing. One Twitter user, @Emperor_YZ, sees Tether volume dominance as a signal of a mass USDT sell-off, and a subsequent fall in USDT value. He expands on his prediction by saying:

“similar to bank run as their usd peg is not enough to keep usdt at 1;1”

And while that scenario may not materialize, for example, there is no other indication of a mass USDT sell-off, and, the company’s reserves may be sufficiently liquid if that did happen, it still pays to be vigilant, even during a bullish phase.

consequence will be a usdt run that will crash it to 0.6 or lower vs usd