Bitcoin Price above $3,000 is Good News for Bulls: Analyst

Next Article: Crypto Market Wrap: Consolidation Continues, When Can We Expect a Breakout?

Bitcoin price above $3,000 is good news for bulls, according to Crypto Michael.

The full-time trader and cryptocurrency commentator said bitcoin scaling between $3,000 and $5,000 was bullish, adding that a drop below $3,000 would result in an equally strong bullish makeover.

“The future perspectives of BTC are brilliant, and we’ll laugh about $5,000 in some years,” Michael predicted.

Reminder to everyone whose not trading.

The future perspectives of $BTC are brilliant and we’ll laugh about $5,000 in some years.

The comments followed a $1,000 bottom target set by Tyler Jenks, the president of Lucid Investments, in the aftermath of April 11 bearish correction. The bitcoin price plunged from $5,471 to $4,975 on the day and formed a fresh lower low towards $4,911 this Friday. Jenks tweeted shortly after the drop that bitcoin was going to correct towards $4,000 and any failure to hold the level as support would extend bitcoin’s downtrend to as low as $1,000.

Jenks was not the first analyst to have predicted a bearish outcome. Data researchers at Bloomberg had earlier said that bitcoin would fall towards $1,500. The prediction came following bitcoin’s failed attempts to break a strict resistance area above $4,187. However, the asset broke out of it on April 2 in a surprising 23-percent jump.

But based on bitcoin’s yearly performance, it was still down 72.64 percent from its historical high. 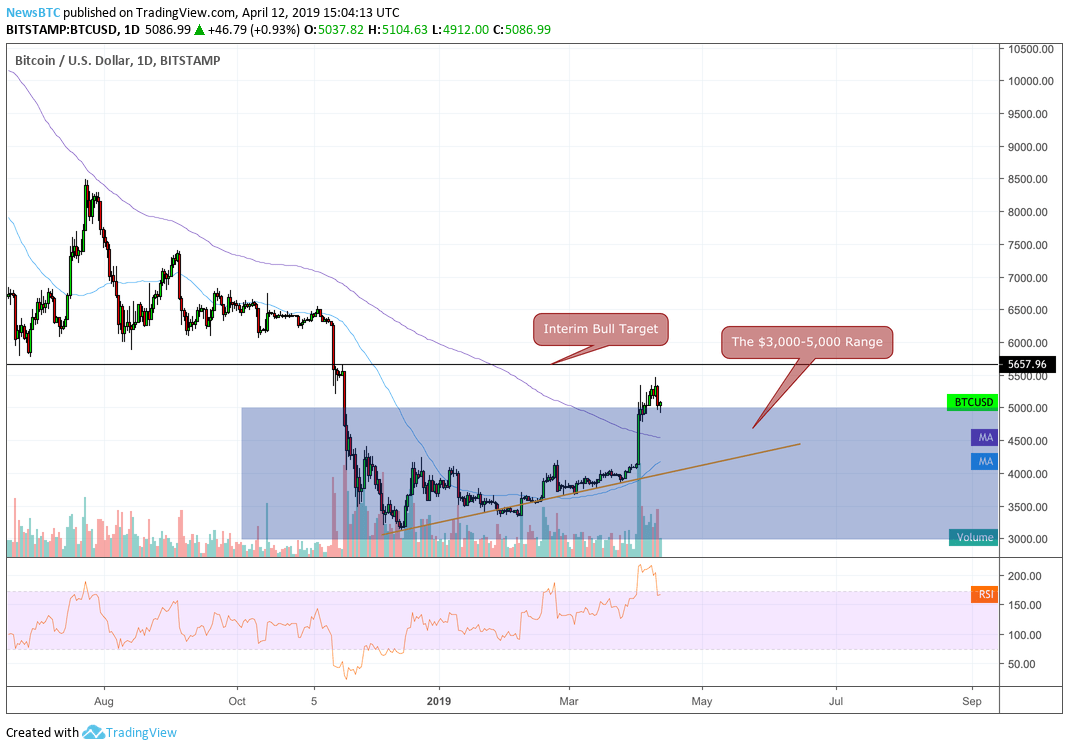 The 2018’s most extended bearish phase brought every high capital cryptocurrency to its yearly low. For bitcoin, the low was $3,100. The area above the said level saw multiple downside breakout attempts since December 15. But each of them failed. On the contrary, every bearish effort met with a robust bullish response. The bitcoin price rebounded from $3,100 many times, as a result.

At the same time, each price action to the upside met with an equally strong resistance area – as explained above. Nevertheless, bulls were able to break above it on April 2. The trend needle shifted to the buy side of the market after that.

What the market is seeing now is bitcoin correcting lower from its overbought areas. The asset was trading at $5,086 during Friday’s trading session. It formed a lower high towards $5,109, without accompanying larger volumes. That explained traders’ cautious behavior around a potential support level at $5,000. Dipping below it will prompt bitcoin to support crucial support levels near 50-Day MA, 200-Day MA, and an ascending trendline forming since December 15 last year.

If price fails to bounce back from either of those support levels, then $3,000 will serve as the last resort. Bitcoin will test it and form a double bottom scenario. It would be a signal to reverse the momentum – a potential bullish action.