Bitcoin (BTC) Steady as IEO is on the Cards for BitFinex

Next Article: Ripple (XRP) Add 4.5 Percent But is it Overpriced?

It may take weeks, but whales are already lining up $300 million in USDT to shore BitFinex, and maintain community’s trust. While Bitcoin could dip, strong support is at $4,950.

Well, there is development around USDT, Tether Limited, and BitFinex. The exchange may be one of the most liquid and perhaps, trusted moving around five percent of Bitcoin’s daily trading volumes. It could be higher when the space is calm but with a string of controversies towing BitFinex and the toxicity around iFinex and mistrust around Tether Limited could end up irreparably damaging the exchange’s reputation.

Days after minting $300 million in USDT and coincidentally, hackers moving 200 BTC, iFinex is under the radar of the New York Office of the Attorney General. However, the exchange’s executives are adamant, maintaining that no funds are lost and would recover the $850 million of Tether Limited reserve funds. Even so, reports show that they are planning for an IEO intending to raise $1 billion.

While the timing may be horrible, it is their insistence that BitFinex will only receive USDT and not Bitcoin (BTC) as most crowdfunding projects do. That is unique and further calls into question the USDT-USD peg which in turn heaping pressure on Bitcoin affecting premiums which continue to widen. 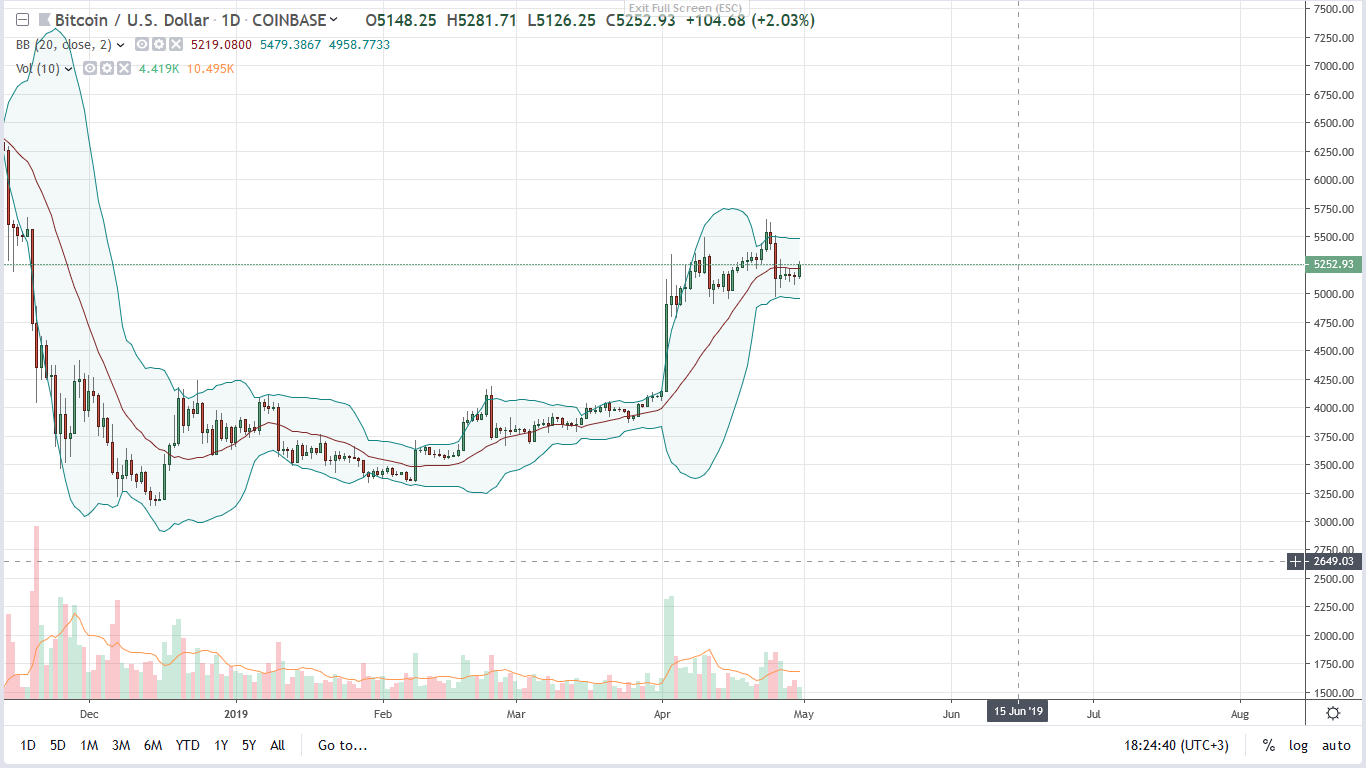 At spot rates, Bitcoin (BTC) is up 1.6 percent in the last day, changing hands at around $5230 according to streams from CoinBase. From the charts, it is clear that bulls are resilient. In a steady uptrend, we expect prices to reverse Apr-25 losses since we now have a double bar bear reversal pattern in a strong uptrend.

The fact that prices are finding support at around the middle BB as BTC consolidate within Apr-25 high low, in the short-term points to bears. It’s easy to see why. Firstly, there is a surge of participation and driving Apr-25 bears are above average volumes. Secondly, the failure of bulls to edge higher wiping out losses of Apr-25 in a trend continuation phase hints of underlying bears.

Because of this, our recommendation is to take a bear stance. After that, the direction of the breakout would guide our short to medium trend. All the same, any drop below $4950 support line could see BTC retest $4,500 in a deserved retest.

Bitcoin (BTC) Steady as IEO is on the Cards for BitFinex was last modified: April 30th, 2019 by Dalmas Ngetich

Read More
Tags:bitcoinbitfinexbtc BitStarz Player Lands $2,459,124 Record Win! Could you be next big winner?
Next Post