Next Article: Did Aftermath of Binance Hack Show Bitcoin is Not as Decentralized? Not Quite

Hackers stole $40 million worth of bitcoin from one of the largest cryptocurrency exchanges; the New York Attorney General sued a bitcoin exchange for allegedly hiding its insolvency; the Chinese government hinted that it would ban bitcoin mining operations. But none of these adverse events could stop the cryptocurrency from rising above $6,000.

The BTC/USD instrument on Thursday reached its 2019 high towards $6,096, its highest in 2019. The price action helped the pair reclaim a psychological target at $6,000 which had a strong probability of deflecting the bitcoin uptrend. But with the level now broken to the upside, the bitcoin market proved that it was resilient to adverse events taking place around it. Instead, it was focusing on long-term bull factors, such as the one aroused by Fidelity Investments.

The Boston-based asset management firm, which is famous among its peers at Wall Street, announced that it would buy and sell bitcoin for its clients within a few weeks. The announcement went to the wire on May 6, the day when the bitcoin price was going through a minor downside correction upon a reversal action from $5,846, a session high established two-days earlier. The news of Binance losing about $40 million worth of Bitcoin in a hack went live on March 7. Nevertheless, the bitcoin price reacted more to the positive aspect of the day and rose as much as 4.98-percent on Coinbase. 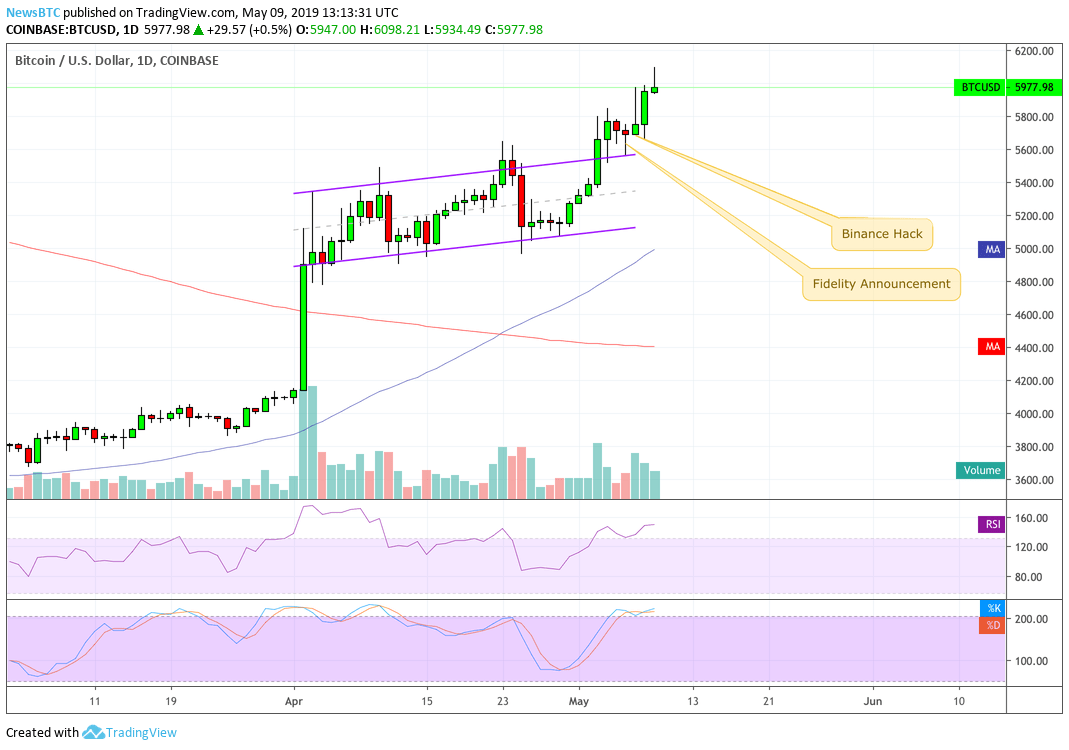 The bitcoin market thereafter formed two more green candles on the daily timeframe to gain 6.45 percent, indicating that traders were willing to buy the cryptocurrency on new higher highs. And once the candle grew above $6,000, the market confirmed its strongest bullish bias since December 2017.

Fidelity’s announcement opened a strong Wall Street perspective for bitcoin. The big institutions so far kept their distance from the cryptocurrency industry, citing lack of regulatory oversights, volatility, and security as main issues. Fidelity itself entered the bitcoin space as a custodian, the one that would safeguard the cryptocurrency for investors. But the company stayed on the sidelines as far as trading bitcoin was concerned.

Their decision to buy and sell bitcoin for only-institutional-not-retail clients hinted that big investors were confident in putting large capital into the cryptocurrency market. That certainly could have kept the retail investors away from any kind of panic-sell sentiment. Besides, a $40 million hack – which may or may not turn into a sell-order – was still small in comparison to a $107 billion bitcoin market.

“Fidelity will begin helping institutional clients buy and sell Bitcoin in the coming weeks,” said Anthony Pompliano, the co-founder of Morgan Creek Capital. “Eventually, every financial services company will do this. If Bitcoin achieved $100+ billion market cap without institutional interest, imagine what happens when the smart money joins.”

Eventually every financial services company will do this.

Here’s Why Bitcoin Price is Looking at an Eye-Popping Bull Run was last modified: May 9th, 2019 by Davit Babayan