Next Article: Crypto Venture Deals Are On The Decline, But Bitcoin is Up 90% YTD

Not surprising, Bitcoin (BTC) prices are under pressure, dropping 10.9 percent in the last day, at the time of writing. Analysts attribute this to a large sell order from Bitstamp that forced prices to fall as supply exceeded demand.

In a day marked by chaos and investors jostling to liquidate Bitcoin (BTC) at market rates, the asset price dropped by $1,340. By sliding from intra-day highs of $7,940 to lows of $6,600, the dip is the largest in more than a year.

Nonetheless, today’s slip is but a minor blip mainly because the candlestick arrangement favors buyers. This is thanks to increasing transaction volumes and general awareness of what BTC represents. Coincidentally, the drop is two days after keen observers noted a sharp increment in the number of retail investors/traders owning more than one BTC.

Even so, the majority are crypto exchanges. All the same, this is bullish and reveals there are optimistic participants keen on accumulating cryptocurrency, specifically to prepare for the next wave of higher highs that would most likely lift Bitcoin above 2017’s peak probably towards $50k, as per BitMEX chief executive Arthur Hayes’ projection. 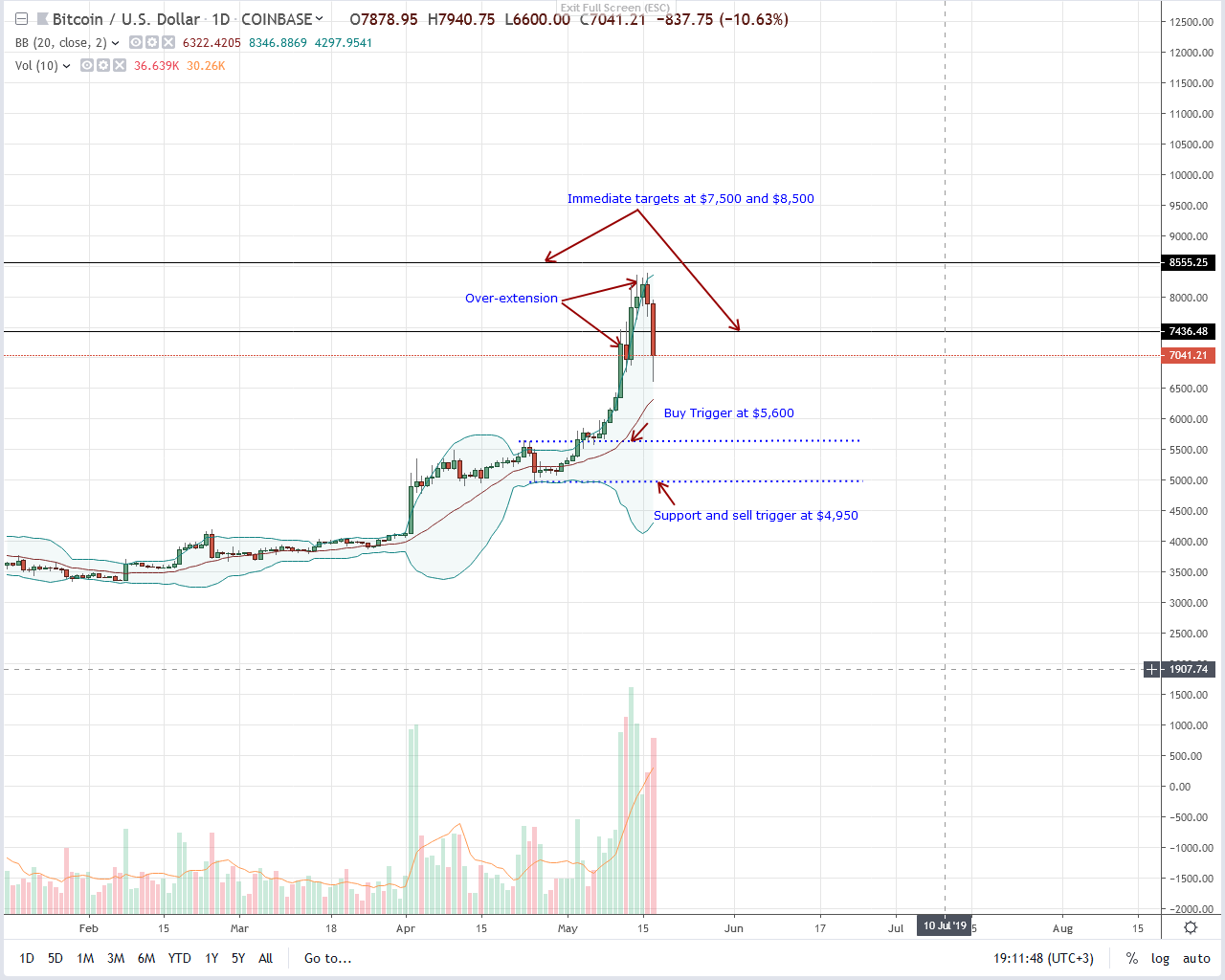 From the chart, Bitcoin (BTC) is down 10.9 percent in 24 hours but up 15.8 percent from last week’s close. Even though buyers are technically in charge, thanks to favorable price action and a stellar performance in the previous six weeks, during which prices surged 75 percent after breaching $4,500, today’s selloff is likely a correction.

Already, what we have is a double bar bear reversal pattern. Because of today’s losses, May 16th bears are back. As such, in days ahead, the path of least resistance will likely be southwards. In that case, risk-off traders can exit their longs, fade the primary trend, and aim for Apr-2019 highs of $5,600 in line with our last BTC/USD trade plan.

Our anchor bar is May 13th with 47k against 21k averages. However, because of BTC overvaluation in the last few days, BTC prices will likely dip below May 13th lows as sellers flow back albeit with light volumes. That will correct the over-extension with probable support at the 20-day moving average on the upper end or $5,600 on the lower end.

Bitcoin (BTC) Correction in Progress, Another $1,300 Drop Likely was last modified: May 17th, 2019 by Dalmas Ngetich

Read More
Tags:bitcoinbitstampbtc BitStarz Player Lands $2,459,124 Record Win! Could you be next big winner?
Next Post