Next Article: Bitcoin Bulls Are Skeptical Even After Bullish Signal, Will $8,500 Hold?

Investors are not as excited as they would otherwise be if it was another project promising a “huge and amazing” announcement. It all has to do with Justin Sun’s history. After Liverpool FC and Baidu mess, they are doubtful if Sun will deliver on June 1st. If he does, TRX could surge above 4 cents.

That the crypto space is competitive is true. With Ethereum leading the smart contracting arena while remaining decentralized is a feat. New entrants like Tron and EOS took a different route, prioritizing speed over decentralization. That may explain why critics are often trailing figure heads.

All the same, talks of centralization aren’t slowing down Justin Sun, the co-founder of Tron. After misleading investors once that Tron has signed a deal with Baidu and later with Liverpool FC, the community seemed to have learned.

On May 26th, he said there is “something huge and amazing” that could drive BitTorrent and TRX prices. However, investors will have to wait until June 1st for all him to divulge details.

But, it seems like investors are reluctant, and it is understandable after failed promises that turned out to be marketing stunts. 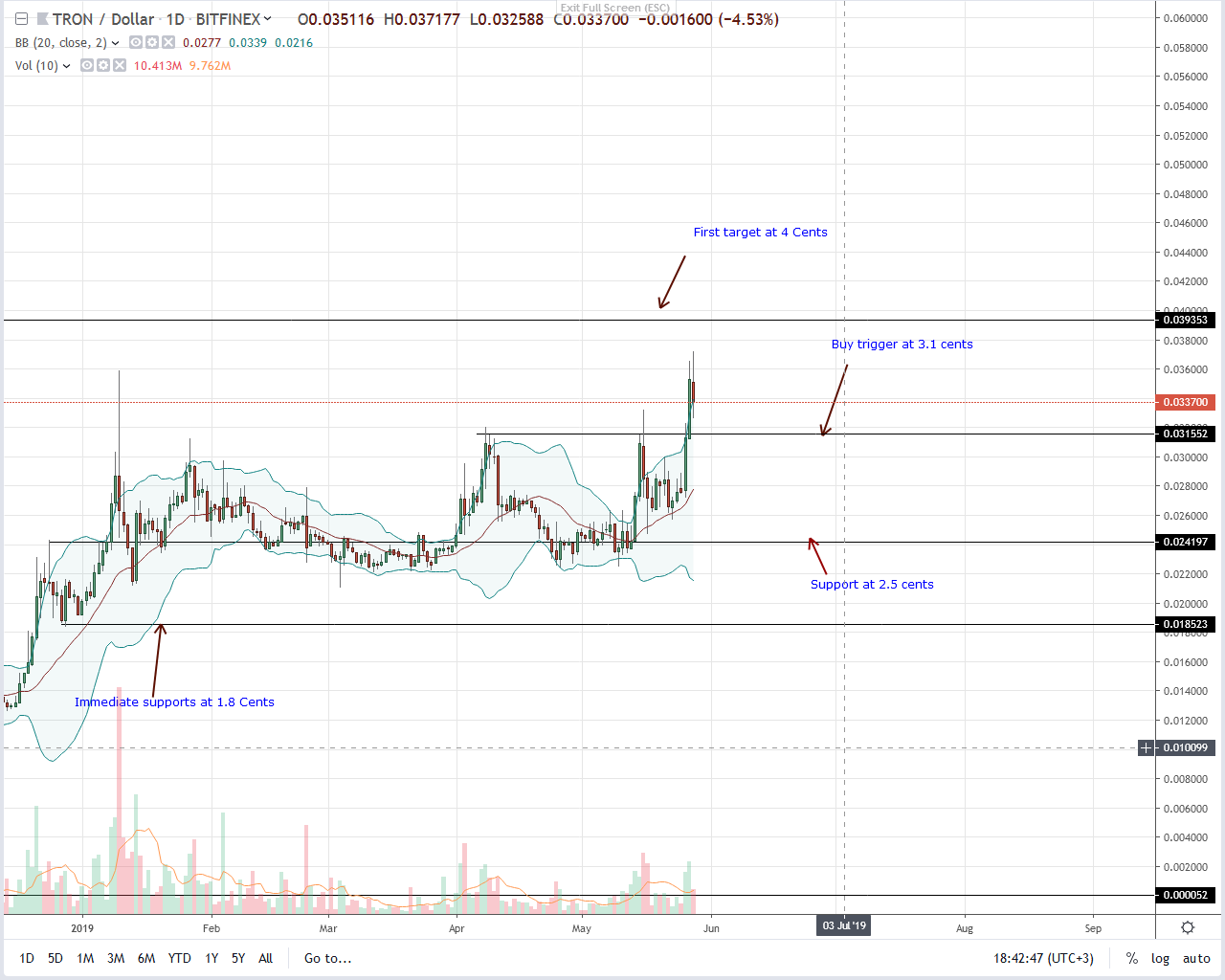 Because price action aligns with our overall bullish stance, there is an opportunity for traders. Visible from the daily chart, prices are trading above two key previous resistance levels, now support, at 2.7 cents and 3.1 cents.

As a result, it also means TRX broke above Q1 2019 0.6 cents range at the back of increasing participation level. In line with previous TRX/USD trade plan, traders can buy the dips with a modest target of 4 cents in a bullish breakout pattern.

Since the path of least resistance is up and behind the upswing is a spike in trading volumes, May 26th bar anchors this trade plan. It has high participation of 17 million against 8 million.

Similarly, the confirming bar had high trading volumes of 22 million versus 9 million averages. Ahead of June 1st, it is likely that trading volumes will increase above 22 million, cementing buyers and ushering in another cycle nullifying bears of late 2018.