Ripple Breaks From a 5-Month Range with Increasing Trade Volumes

Next Article: A Huge Bitcoin Price Correction is Still a Couple of Months Away: Analyst

For what Ripple seeks to achieve, the IMF has praised the San Francisco startup. Nonetheless, George Harrap of Bitspark believes that Bitcoin is more practical, liquid, and useful than XRP.

Different blockchain projects have different objectives. Ripple intends to build a global platform from where banks and financial institutions can run from. Less than a decade later, and they are recording success. Although onboarding is not as fast, at least, supporters can argue that progress is visible.

Ripple, as an independent company, has a fruitful relationship with several central banks, including that of Saudi Arabia, the Saudi Arabia Monetary Authority (SAMA). Besides, it has an open communication link to the White House. At least that is what Cory Johnson, the former Chief Marketing Strategist said.

Furthermore, the IMF and the World Bank lauds Ripple’s effort of improving livelihood. All the same, the objective is to build liquidity. The ease of fund transfer in the more extensive web of web 3.0 on the Internet of Value will be possible if people and firms can move funds instantaneously.

Through xRapid, Ripple supporters are positive that XRP as an on-demand liquidity tool, a facilitator can make that possible. However, George Harrap of Bitspark argues that Bitcoin is far more practical and usable than Ripple. The reason behind this argument is the penetration level, the number of companies accepting BTC, and the general level of liquidity across different fiat pairs. 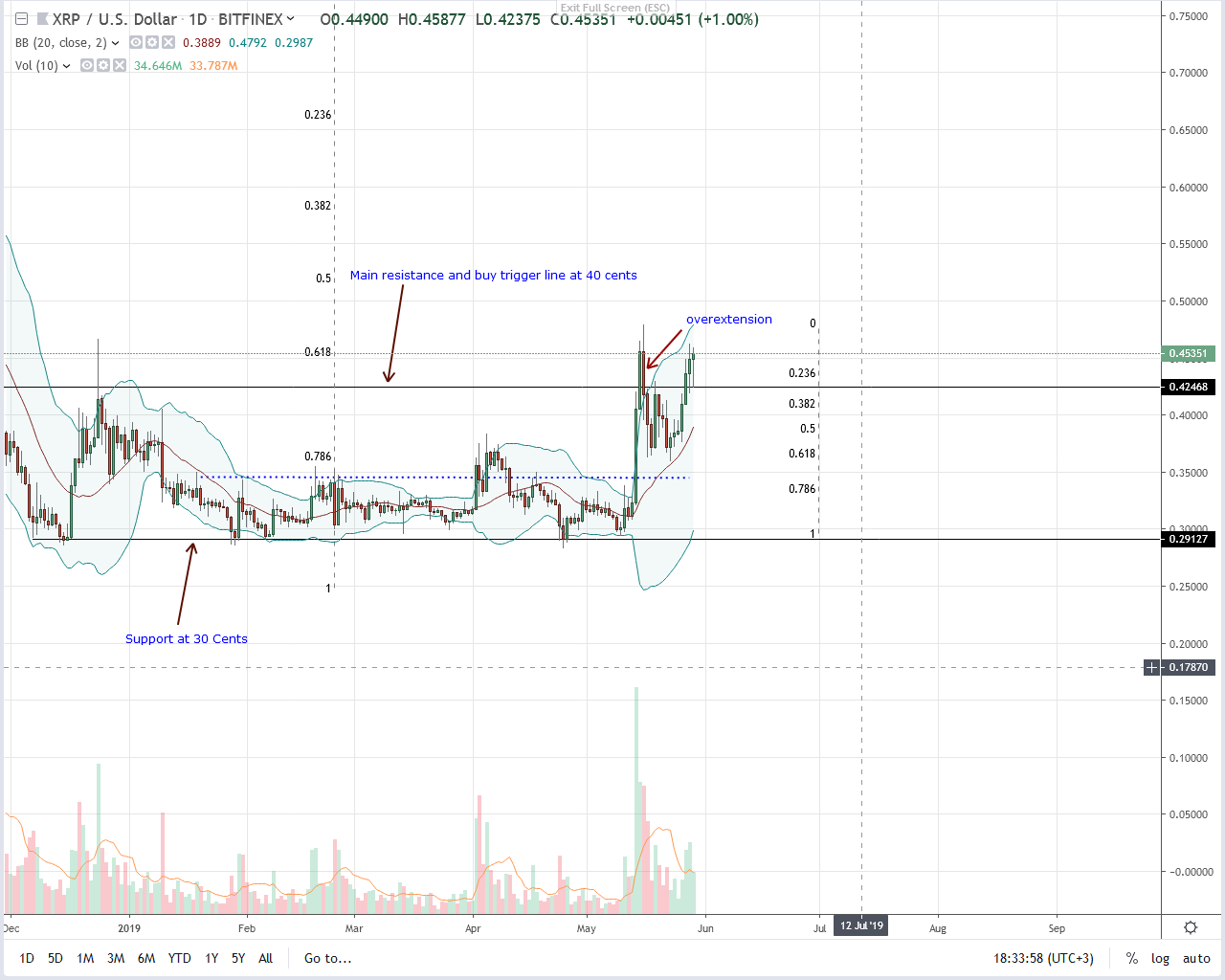 Trailing EOS, BSV and Litecoin, Ripple (XRP), is up 13.2 percent in the last week. A standout in all this resurgence is the breach and close above 40 cents as participation levels swell.

Even though there is a ceiling at around 43-45 cents zone, bulls are solid in their march. As a result, the expansion in price sync with previous XRP/USD trade plans. Note that after five months of XRP trading within a 10 cents range with limits at 30 and 40 cents, the rejection of lower lows is a mark of bulls.

Therefore, while conservative traders can wait for clear cut breakouts above May 16th high, there is a window for aggressive traders to ramp up in smaller time frames. Feasible targets will be at 60 cents and later 80 cents.

Even though trading volumes are low and pale in comparison with May 14th’s where participation topped 187 million, there is a steady increase in volumes. In six days, volumes surged three folds from 19 million of May 23rd to 59 million of May 28th. Because the trend is bullish, any breach clearing May highs could see volumes surge towards or even above 187 million confirming buyers.

Ripple Breaks From a 5-Month Range with Increasing Trade Volumes was last modified: May 29th, 2019 by Dalmas Ngetich