Next Article: Art Resides in Ethereum’s Immutable Ledger, ETH Down 9.9%

Apple plans to upgrade and release a new cryptographic developer tool replacing its superb CommonCrypto. All in all, it is a favorable decision following the steps of Samsung. At the time of writing, Bitcoin is stable and struggling against determined sellers.

At a time when Facebook, Samsung, and leading Wall Street tech leaders are foraying into blockchain and crypto, Apple is joining the crypto bandwagon. In a measured announcement during the Worldwide Developers Conference in Cupertino, Apple shall unveil a CryptoKit accompanying the release of their latest operating system, the iOS 13.

The “cryptographic” developer tool will replace the CommonCrypto, which is Apple’s previous framework. With this, developers will now execute hashing operations, generate keys, and altogether manage their crypto processes in a “secure enclave achieving a similar level of security to hardware wallets.”

“For the first time, developers can leverage the secure enclave to manage a ‘user’s keys in an iPhone, achieving a similar level of security to hardware wallets.”

While Apple upgrades, Facebook is doing everything they can to avert another crisis. Their plan of launching a stable coin and possibly monetize WhatsApp via Project Libra may draw heat. That could explain why their representatives are consulting with the Winklevoss Twins as well as the US CFTC.

Related news has it that Mark Zuckerberg’s team will have a Foundation in place to deflect talk of possible centralization while concurrently complying with ‘regulators’ demands. 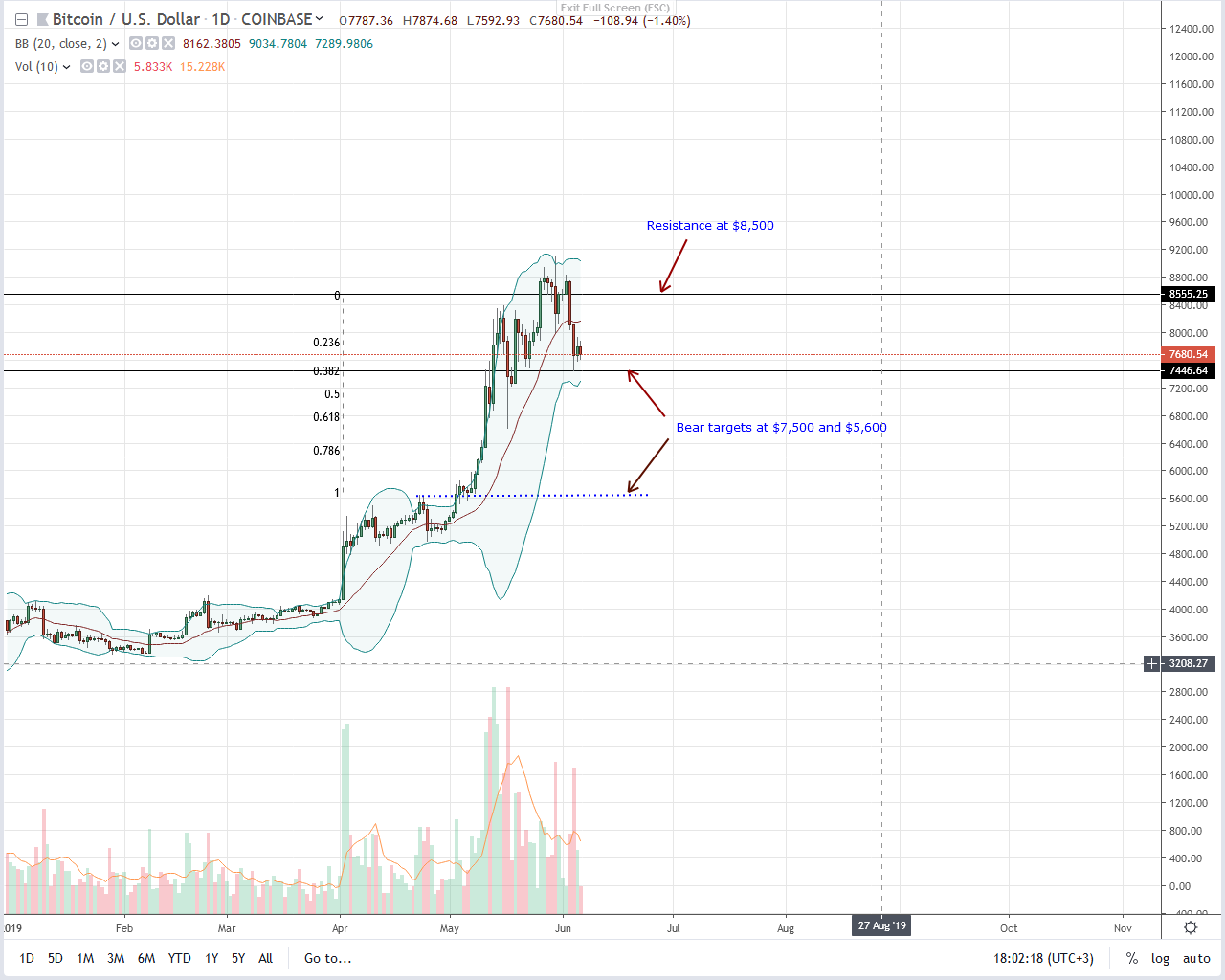 Meanwhile, Bitcoin (BTC) is under pressure. After two months of higher highs, prices are cooling off, allowing for a bear assault. At press time, BTC is down 11.5 percent week-to-date and stalling at $7,800. From the daily chart, buyers are in control.

However, after an extended rally that saw BTC clear $6,000 and retests $9,100 in short bursts, the retracement was inevitable. Even so, strong support is at $7,500 with caps at $8,500 and $9,000. Since BTC is consolidating against the USD, aggressive traders can buy the dips aware that any fall below $7,500 cancels this bullish outlook.

Such a breach, and as emphasized in previous BTC/USD trade plans, could spur a selloff towards $6,600 and to $5,600 or April high. That will complete a retest typical of breakouts.

Leading this trade plan is June 4th bear candlestick. Behind its extensive trade range is high participation of 30k against 17k.

Therefore, for trend continuation, any upswing above $8,500 that rewind losses of June 3rd  and 4th, must be with volume swells above 30k complementing those of May 26th.

Conversely, any fall below $7,500, canceling this trade plan must be with equally high trading volumes.

Read More
Tags:applebitcoinbtc BitStarz Player Lands $2,459,124 Record Win! Could you be next big winner?
Next Post