Next Article: Ripple Ambitious, XRP Prices Break Out From A Bull Flag

A strong breakout above $10,000 over the weekend shows us just how hot bitcoin is at the moment. We’ll get into some of the driving factors below but I just want to take a moment to reflect.

The first time bitcoin breached this level to the upside was in a frenzy of FOMO as most of the world was just learning what this new digital asset is all about.

This time, however, the rise seems much more sustainable and the current price more justifiable given the current levels of awareness and adoption. We can see this quite clearly just by looking at the number of transactions happening on the blockchain.

As we can see, the peak of the last bitcoin cycle brought the rate above 3.5 transactions per second (TPS), a level which held for the better part of two months. Due to the increased usage of bitcoin since then, the blockchain has been running above 3.5 TPS since the start of 2019.

We can also look at the level of transactions on peer to peer site localbitcoins.com, which is showing a sustained increase in activity as well. On September 9th, 2017 the total volume surpassed $50 million for the first time ever, a level that has largely held ever since.

Yes, my friends. This time it truly is different.

Please note: All data, figures & graphs are valid as of June 24th. All trading carries risk. Only risk capital you can afford to lose.

Months of angst will come to a head by the end of this week as Presidents Trump and Jinping are set to meet at the G20 summit in Osaka Japan.

Most political pundits don’t seem to think that any sort of groundbreaking deal will come from this meeting. But with Trump, we’ve learned to expect the unexpected.

Volatility is still quite low considering how much is at stake but it seems that traders are betting that it will rise as we get closer to the summit. 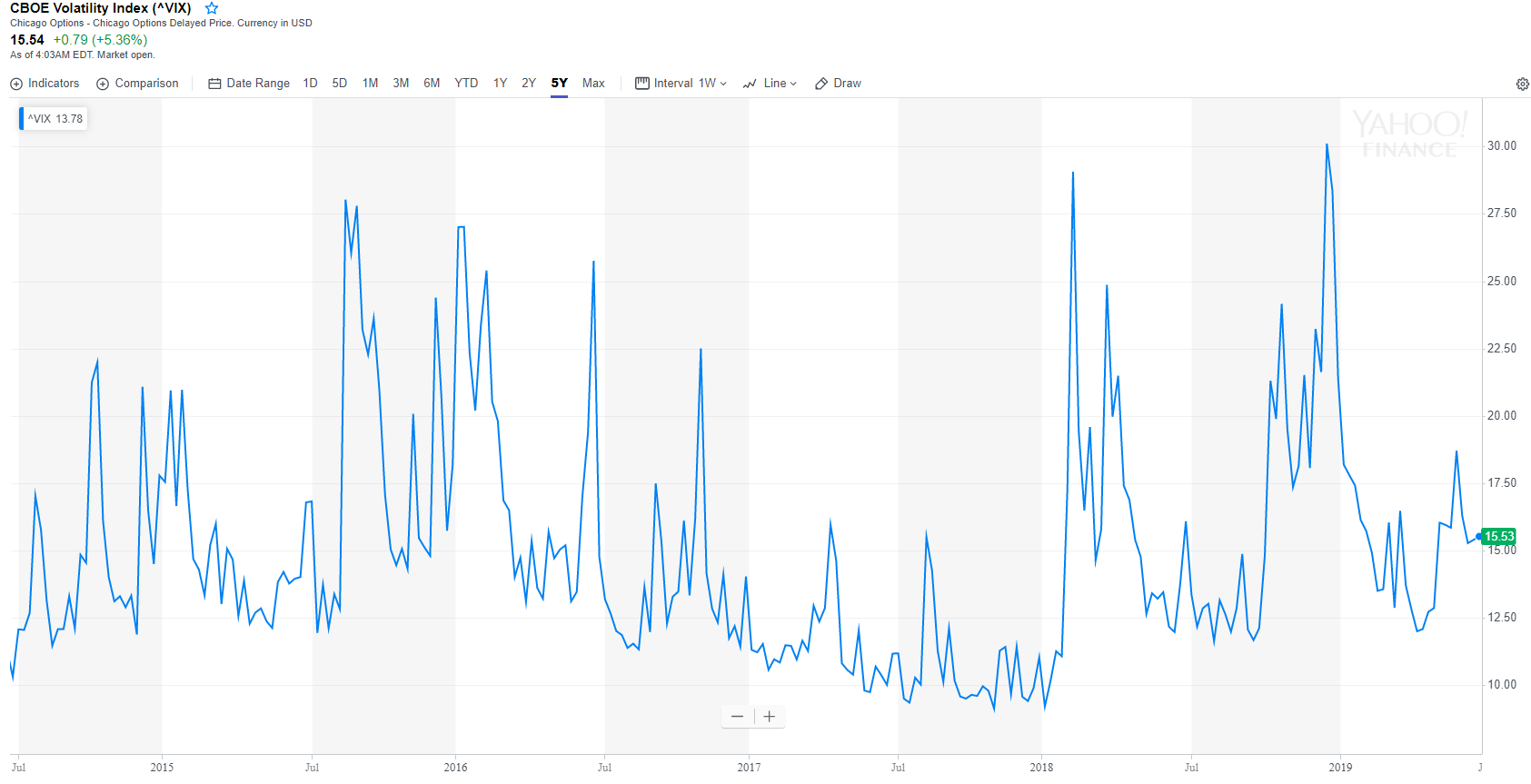 Investors are also watching the situation in the Middle East quite closely. However, looking at the markets, you’d hardly notice any tension whatsoever as several stocks and indices are on or near their all-time highs.

Reflecting on this chart, it’s clear that the Dow Jones index has been meeting major resistance near its all-time highs for the past year and a half. The pattern on the chart above is known as a triple top. The upward trend over the last few years in conjunction with the flat top makes this a classic rising wedge. I wonder how badly President Trump wants to pop the top off the stocks right now?

Enough to strike a sweeping trade deal with China perhaps?

Despite what we keep saying about this latest move being part of a larger cycle, it seems everyone is eager to understand the ‘why now’ about bitcoin’s latest leg up.

Well, I can tell you that it probably isn’t the news. Just before the weekend, we received confirmation that the global regulatory organization FATF, is preparing a wide sweeping crypto crackdown, that may well put a lot of the smaller crypto exchanges out of commission.

Perhaps the reason this announcement was completely brushed off by the market is that we have an entire year before it goes into effect. Many traders are likely banking that within this timeframe we could see the emergence of new on-ramps to the crypto market, possibly by way of decentralized exchanges or even Facebook coin.

In any case, in an effort to understand the ‘why now’ a bit deeper. I’ve run a poll over the last week, which could give us a bit more insight. 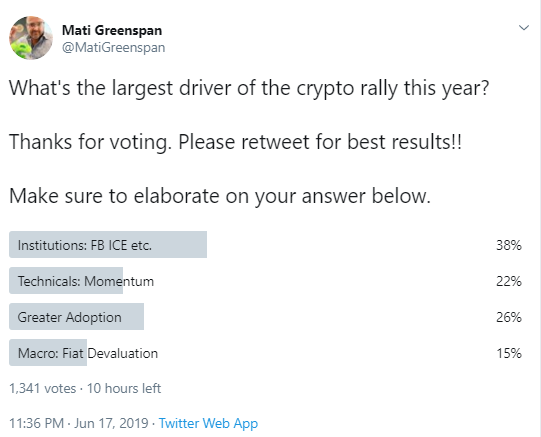 From what it seems, the number one reason that respondents feel is driving the price is the speculation that large institutional players are about to enter the market. Oddly, this is rather in line with what I’ve been saying since April 2018.

It’s not just Facebook either, though they’re the big one. Fidelity, the Nasdaq, and Bakkt are a few examples of large scale institutions that are on the verge of diving into the crypto market. We know that AT&T has already opened bitcoin payments to its customers and very soon, the SPEDN app will likely allow people to pay with crypto seamlessly in thousands of retail stores across the United States.

Over in Japan, where bitcoin has been legal since 2017, messaging giant Line Corp is now set to open its own exchange as well.

Of course, the above poll is not reflective of the entire market. Several people wrote in to say that whales are a huge driver as well, and yes, we’ve mentioned the extremely low liquidity as a driver before. Anyone trying to buy a few million dollars worth of bitcoin will have a hard time finding the supply and thus could have a limited influence on the price.

The number one write-in answer to the poll though was “all of the above.”

It’s a small world, and there’s a lot happening at the moment. The thought of more sanctions in Iran, which is currently one of bitcoin’s biggest hotspots no doubt has some citizens stacking up on cryptoassets. But Iran’s market is still pretty small compared to the rest of the world.

A rally of this magnitude doesn’t usually happen based on one catalyst. It’s a general change in sentiment in a market with extremely limited supply.