Ripple (XRP) Underperforming, Will It Get Worse as Price Sees 16% Fall?

According to crypto analytics services, one billion XRP is on the move, following the tokens’ discharge from an escrow account. Speculation is that the account belongs to a Ripple executive. The bone of contention: this may hurt prices, deflating XRP holders already dissatisfied with an underperforming asset. Presently, XRP is down 16 percent over the past week.

The assumption Ripple is striving to be an alternative payment platform is correct. The company’s goal is to see the majority of the world’s leading banks connect to the RippleNet and the XRP Ledger. Thus, it would be perfect if they were to adopt xRapid.

With more than 55 billion XRP under their control, Ripple wields enormous power within the XRP ecosystem. That fact alone is a cause of furor. However, the recent movement of a billion XRP from an escrow account has become a source of debate within the community.

Aggravated by David Schwartz selling his XRP stash in Q2 2019 and the underperforming asset, this large transfer the medium to long-term performance of the cryptocurrency in jeopardy. That, if anything, is outright manipulation of the XRP price, according to concerned observers.

Claims are that Ripple is intentionally keeping XRP prices low to beckon in more clients willing to leverage xRapid in their operations. To do that, they make use of binding contracts as well as Non-Disclosure Agreements (NDAs) with their partners.

Now, the movement of one billion XRP will call into question the power of Ripple, and even their true intentions. Besides, it is hot on heels of reports that Ripple Labs were under-reporting the amount of XRP released. 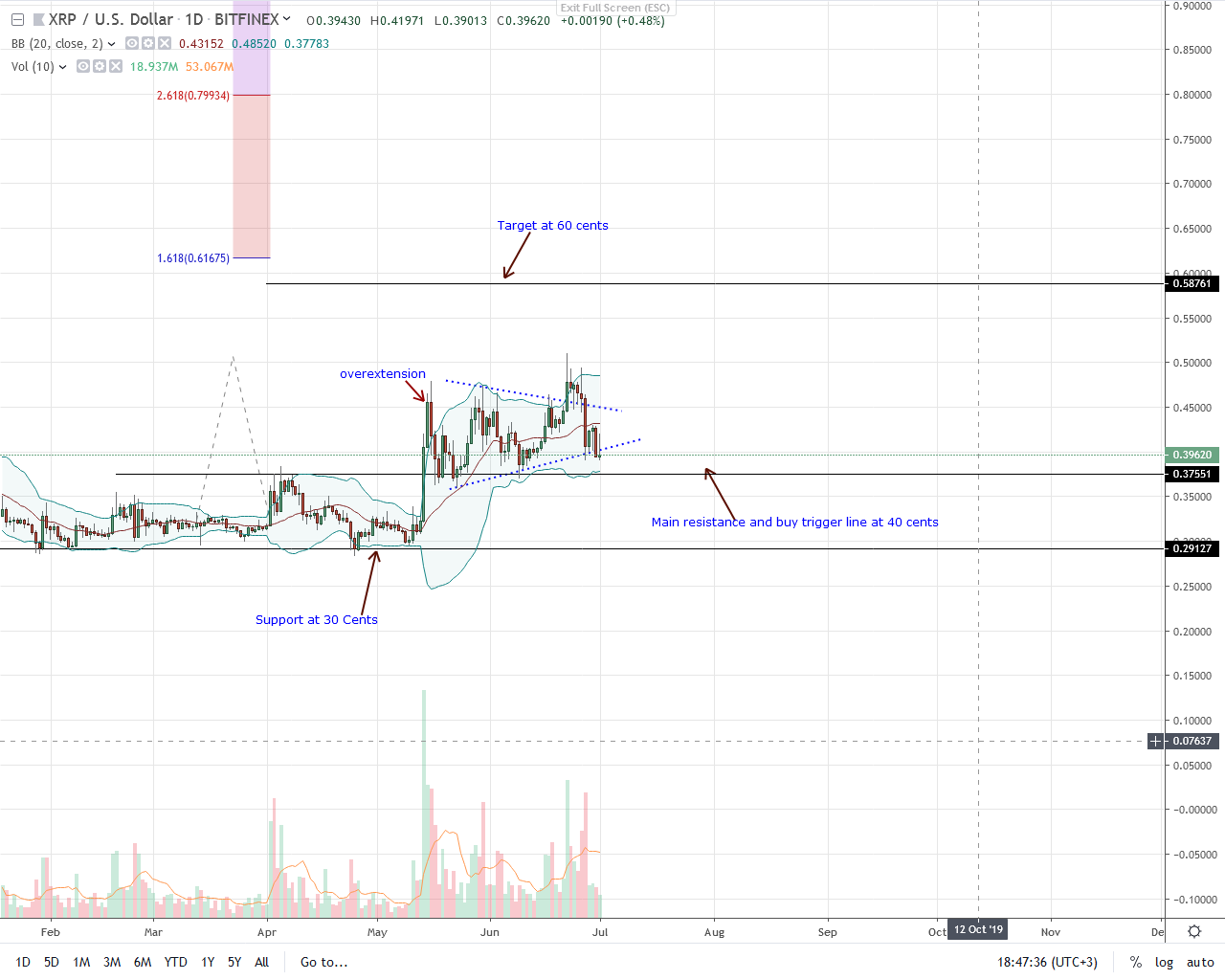 At the time of writing, XRP is trading 16 percent lower from last week’s close. Even though traders are optimistic about XRP’s prospects, falling BTC prices could slow down upward advances.

Generally, XRP is ranging within a 15 cents zone with caps at 50 cents. While in an upwards trend inside an ascending wedge, it is ideal that bulls take charge. That demands an upward correction as XRP spike past 50 cents.

From previous XRP/USD trade plans, that will trigger participation. In that case, the first target will be 60 cents. On the flip side, losses below 40 cents or Q1 2019 high, now support, could see XRP tumble to 34 cents and later 30 cents invalidating this price overview.

With shrinking volumes, a mark of bulls is a complete reversal of June 27 bear candlestick. The bar has high trading volumes of 102 million. If buyers flow back, then it is essential that any spike erasing losses must be with high participation exceeding 102 million or even 113 million of June 22. Conversely, steep declines canceling out buyers ought to be with a similar level of involvement.

Tags: RipplexRapidxrp
TweetShare
BitStarz Player Lands $2,459,124 Record Win! Could you be next big winner? Win up to $1,000,000 in One Spin at CryptoSlots

Analyst Who Predicted Bitcoin’s V-Shaped Reversal at $3,700 Is Bullish