Next Article: Bitcoin Smashes Past $13,000: What Fundstrat Says is Behind BTC's Strength

Never before has a strong economy ever presented such a serious problem for a central bank.

The US jobs report published last week was clear evidence that despite whatever warning signs there might be, on the surface the economy is quite strong.

Yes, investors are nervous about the prevalent geopolitical risks and this is showing up in the bond market but the Fed has a very clear dual mandate. The Feds stated mission is to a) maintain maximum employment and b) maintain optimal inflation. Both of which they are doing extremely well.

Nevertheless, the market is expecting the Fed to cut the interest rates when they meet at the end of the month. A move that is usually reserved when the economy is doing poorly.

Fed head Jerome Powell managed to avoid headlines when he spoke yesterday. He probably won’t be so lucky today and tomorrow when he testifies before congress and answers the House’s difficult questions.

Most analysts expect Powell to submit to the market, submit to the President, and reaffirm his commitment to cutting rates this month. If he does decide to burst their bubble (pardon the pun) consequences could be dire.

Please note: All data, figures & graphs are valid as of July 10th. All trading carries risk. Only risk capital you can afford to lose.

Markets are currently on edge waiting for the Fed. Things may look serene on the surface but more than likely this is the calm before the storm.

Should the Fed manage to navigate today’s and tomorrow’s sessions without incident, they’ll still be faced with a tough decision at the end of the month in which they’ll either need to completely capitulate despite what’s in the best interest of the economy or upset investors and the President who are eager for more stimulus.

It’s probably the number one question I’ve been getting since the bull rally started on April 2nd.

Several crypto influencers have already stated that they feel an altseason is coming soon and that altcoins will outpace bitcoin at that time. In my mind, however, it’s not really possible to predict a phenomenon like this in advance. Rather, we can only identify it when it happens.

At the moment, bitcoin is clearly leading the charge. The Bitcoin dominance index is currently at 65%, its highest levels since the peak of the last bull run. 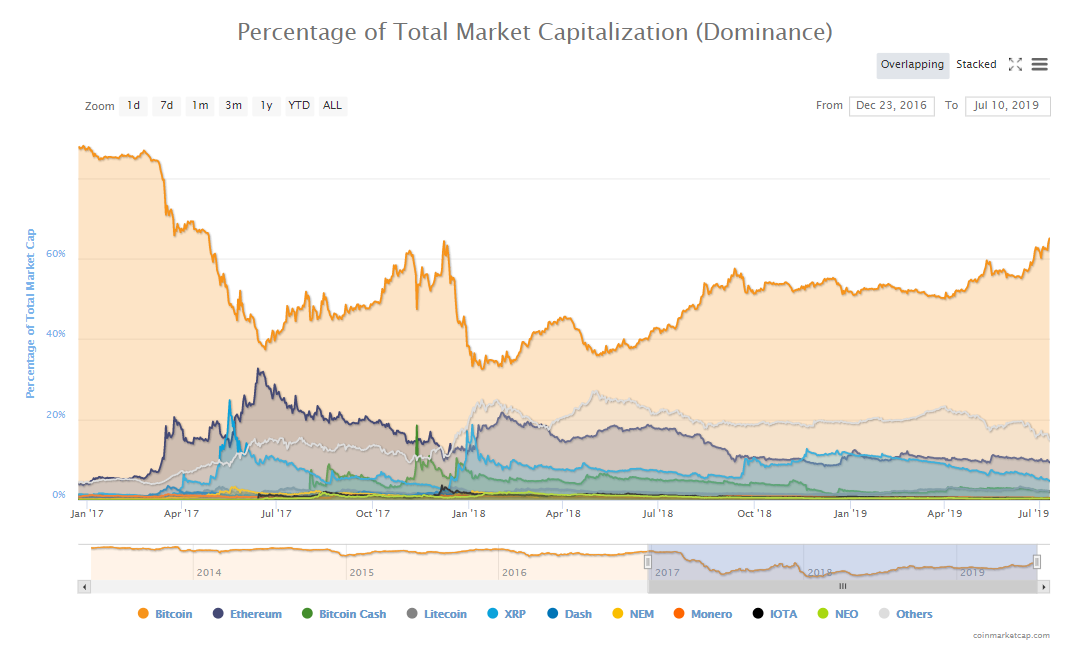 Looking at the level of gains over the last month, we can see that bitcoin is the clear leader here as well, and has been ever since the April breakout. Don’t get me wrong, the crypto market is still very highly correlated, but those correlations do seem to be breaking down lately.

The key point to remember here is the main driver of the rally. I mean, besides the fact that we’re in a new cycle or season.

One of the main factors cryptotraders have been pointing to lately is the speculation that large industrial players are about to enter the market. So we need to keep in mind that this is a bitcoin specific narrative and doesn’t necessarily apply to many altcoins.

With that, we also have more and more industry veterans coming out in strong support of bitcoin over the alts. Even Ian Balina, who was one of the major cheerleaders for the ICO market in 2017 is now showing clear signs of Bitcoin maximalism.

Since our update yesterday, it seems that bitcoin has continued to test higher ground. The only interim resistance left is the recent high around $13,800.

The market clearly has a buying appetite at the moment. Yesterday morning, a large sell order of 7,800 BTC was filled in a matter of moments.

The way it seems to me is that momentum from before the cool-down is starting to build up again. A fresh high would no doubt be taken by the market as a confirmation of that and could certainly create more FOMO as we trek toward the all-time high.

Let’s have an excellent day ahead!