The U.S. Attorney’s Office of the Southern District of New York has charged Jon Barry Thompson of Volantis Escrow Platform LLC, for lying and stealing $7 million from clients. Meanwhile, BTC prices are consolidating above $9,500.

The principal owner of Volantis Escrow Platform LLC, Jon Barry Thompson, has been charged by the U.S. Attorney’s Office of the Southern District of New York for fleecing clients off $7 million, CoinDesk reports.

Charging Jon against two counts, each of commodity and fraud, the court found the owner of the Bitcoin escrow company culpable. The plaintiff accuses him making a false representation on the extent of his custody over digital assets.

In a statement, the prosecution team said:

“As his clients soon realized, however, Thompson’s representations were false, and these cryptocurrency investors ultimately lost all of the money they had entrusted with him because of his lies.”

While at it, Steven Mnuchin, the U.S. Secretary of Treasury, has reiterated his concerns that Bitcoin is a tool for money laundering. He is now urging for regulatory collaboration, he said:

“We’re looking at all of the crypto assets. We’re going to make sure we have a unified approach, and I guess that there are going to be more regulations that come out from all these agencies.”

Ironically, for all his criticism of Bitcoin, Mnuchin is one the many businessmen and politicians accused of tax evasion as per the bombshell Paradise Papers of 2017. 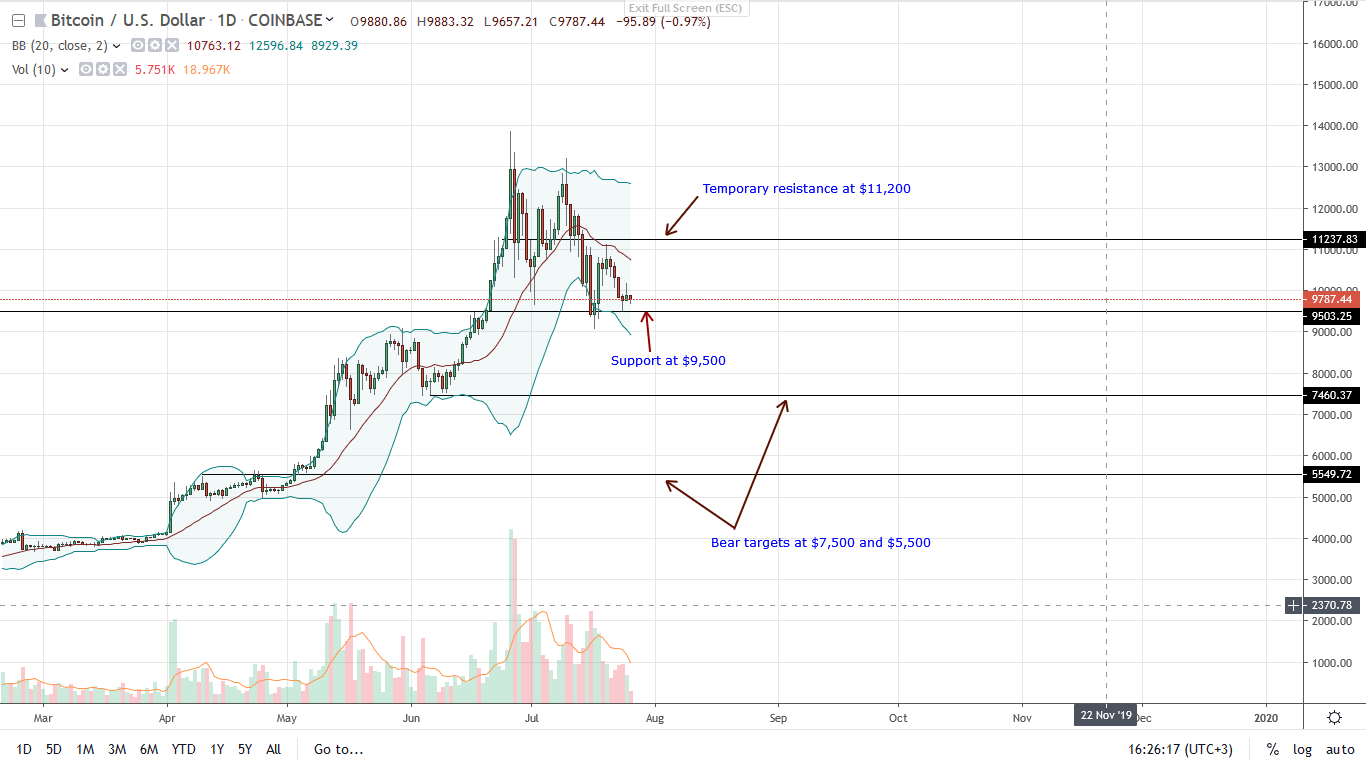 At the time of writing, BTC is under pressure. Dropping 2.9 percent and 7.7 percent respectively in the last day and week, bears are back. From the chart, BTC price is in consolidation mode above $9,500.

As such, and in sync with previous BTC/USD trade plans, aggressive traders can short the coin while aiming at $9,500 and $7,500 in days ahead. Advising this preview are technical factors. One of them is the inability of bulls to be consistent and reverse losses of July 16.

From previous mentions, this is bearish if the analysis is from a top-down approach or even from the effort versus result point of view. Therefore, although bulls have a chance above $11,200, risk-off traders can liquidate their holdings with targets as aforementioned.

In light of this, the best course of action is to maintain a neutral stance until prices either surge above $11,200 igniting buyers, or dump below $9,500 in a sell-off.

Leading this price action will be July 16 bear candlestick. Unique and wide-ranging, the bar has above-average trading volumes of 43k. Any definitive breakout above $11,200 or $9,500, therefore, ought to be with high participation exceeding 43k. Only then will traders either short the retracement or buy the dips with targets at $14,000 or $7,500 respectively.