Bitcoin Price Rejected From $10K, Or the Start of a Bullish Reversal?

Next Article: Bitcoin Reclaims $10,000 in Sudden Surge: Can Bulls Keep the Pace?

This morning, July 31, 2019 Bitcoin price soared from lows around $9,500 to a local high of $10K before the leading crypto asset by market cap took a short pause.

Bears have been in control ever since Bitcoin price was rejected from $13,800, and has struggled to maintain the bullish momentum it has had behind it since the early April rally first began. But Bitcoin price is also not going down without a fight from bulls, who may now be turning the tide if the push above $10K can be maintained.

Over the month of July, Bitcoin price has fallen steadily from its June highs near $14K. After a powerfully violent rejection that resulted in a flash crash that knocked out most exchanges, Bitcoin has struggled to revisit highs and continues to set higher lows and lower highs – the exact definition of a downtrend.

But as the first-ever crypto-asset appears to be on the ropes and flirting with further downside, bulls have begun to show signs of strength once again, and the push to $10K may be the beginning of a full-blown bullish reversal.

Weekly support at $9,400 may have proven too strong for bears to break through, and have given bulls the slight upper hand in recent days. However, Bitcoin will need to break and close above weekly resistance around $10,200 in order for the reversal to have the momentum that bulls will need to set a higher high and resume Bitcoin’s uptrend. 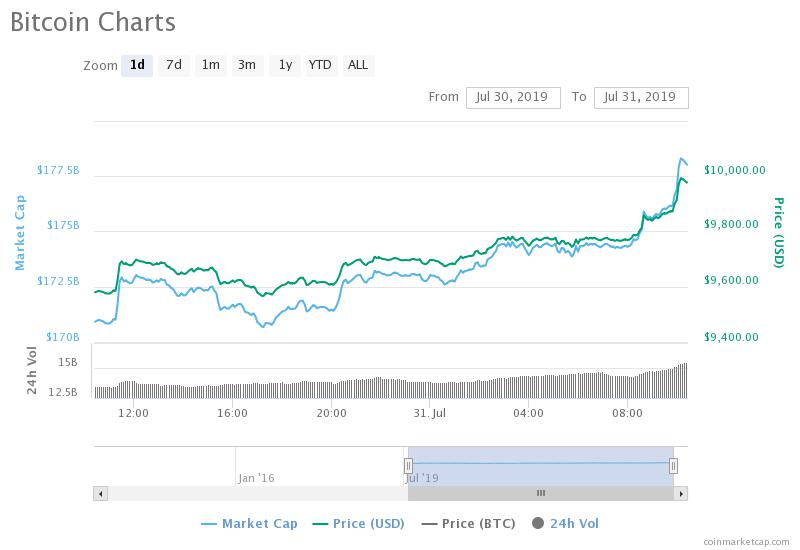 Pivotal Moment for The Short-Term Future of BTC and Crypto

Bitcoin price is clearly at a pivotal point. During the last bull market, corrections rarely exceeded a 30% drop, and each 30% drop resulted in roughly a 150% increase from each correction. With the current correction slightly over 30%, if Bitcoin sets a new high from here, it’s almost certain that a new bull run is confirmed and the price per BTC could reach a new all-time high in a matter of weeks to months.

The bearish scenario would have seen this small rejection at $10K to be the final blow to bulls who are floundering from the recent downtrend and sell pressure.

Sell pressure has only picked up in recent days, following the massive rejection at $13,800. Since then, the United States government has come out in full force, making threats, negative statements, and rolling out stiff regulation across the crypto industry. The fear, uncertainty, and doubt have caused altcoins to capitulate, Bitcoin price to drop, and the entire market to come to a standstill as can be seen in trading volume dwindling.

Where Bitcoin price goes in the next week or so could define its trend for the remainder of the year. Will we see a new all-time high after the important FOMO trigger at $10K is breached again, or is that FOMO trigger now resistance and this was the last stand for worn-out bulls? only time will tell.

Bitcoin Price Rejected From $10K, Or the Start of a Bullish Reversal? was last modified: July 31st, 2019 by Tony Spilotro