Following days of consolidation, crypto markets are on the up today as Bitcoin taps five figures once again. The altcoins are largely immobile, that is except Litecoin which appears to be on the move before its halving early next week.

The moves by these two digital assets resulted in an $8 billion cash injection into crypto market cap which touched a five day high of $277 billion. Total trade volume for all cryptocurrencies is back over $50 billion as momentum starts to bubble up again. 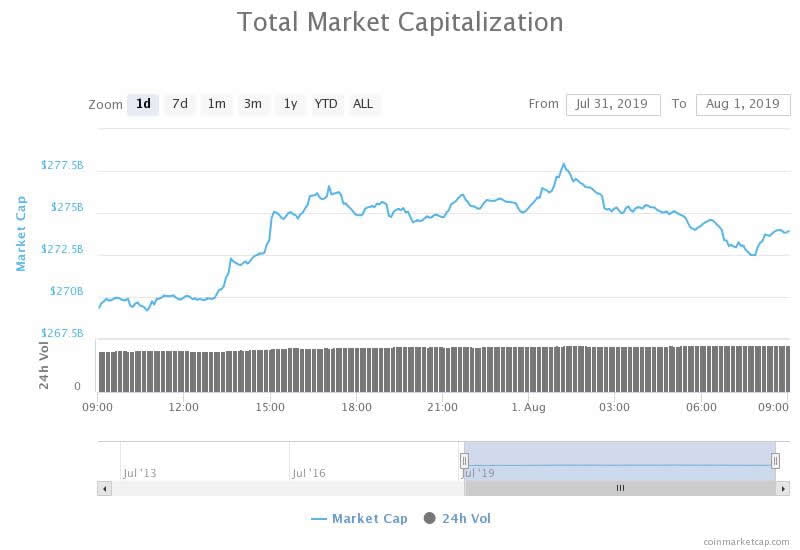 For the past two weeks, however, crypto markets have been range bound trading between $250 and $300 billion, largely around current levels right between the two.

The lift today has come from Bitcoin once again as it broke above the five figure barrier at touched an intraday high of $10,170. The move has lifted it around 7.5 percent from its low yesterday around $9,700. The day’s Asian trading session has been a little bearish with a slide back to $9,880 but as Europe awakes BTC has moved back to $10k again.

The highly anticipated FED interest rate cut was largely viewed as bullish for Bitcoin as it is traditionally a sign of a slowing economy which could lead to a weaker greenback. BTC did not react much proving that it remains largely uncorrelated to US monetary policy. Economist Alex Kruger was quick to point this out.

“$BTC saw a very minor increase in trading activity at 14:00 EST, time of the FOMC statement. FOMC volatility hit the market the most starting 14:37 EST, during Powell’s conference. $BTC did not even flinch then … That’s how an uncorrelated asset for which monetary policy is a very minor driver trades.”

$BTC saw a very minor increase in trading activity at 14:00 EST, time of the FOMC statement. FOMC volatility hit the market the most starting 14:37 EST, during Powell's conference. $BTC did not even flinch then. pic.twitter.com/fBD3LfzEH3

Altcoins Remain In The Red

The majority of the altcoins remain bearish this Thursday as declines deepen. Many, such as Ethereum, simply haven’t moved since the weekend. ETH is still trading sideways after tapping a high of $220 according to Tradingview. There has been very little movement in Ethereum since it dumped early last month.

XRP has dropped a little but Litecoin is the only real mover in the crypto top ten as LTC reached $100 again. It did not stay there long, however, and immediately pulled back to $97 marking a 5 percent gain on the day. Litecoin halving is now only four days away so it could see further gains over the weekend.

Binance Coin has made a couple of percent with a climb to $28 but the rest are falling back. The biggest losers in the crypto top twenty at the moment are Bitcoin SV, Cardano, LEO, and Cosmos.

Crypto Markets Up $8 Billion as Bitcoin and Litecoin Lead The Way was last modified: August 1st, 2019 by Martin Young