While 2018 was most certainly a bear market for Bitcoin and crypto assets, 2019 has been mostly a bull market or at least the beginning stages of one. The latest in the growing list of signs the leading crypto asset by market cap is building a bullish foundation and will rise to new all-time highs, is a “golden cross” on three-day Bitcoin price charts.

The last time this occurred, was in February 2016, and from there, Bitcoin went on to bring investors a 4,900% return on investment. Could the same happen for Bitcoin once again?

Bitcoin price has just triggered a “golden cross” on its three-day price charts, and the entire crypto world is enthusiastic that this could mean that Bitcoin is about to begin a true bull run, and based on past experience, investors are rightfully excited.

BULLISH: The 50MA crossed above the 200MA on the 3-day BTC/USD chart, forming a so-called golden cross. The last time this happened was in February 2016. pic.twitter.com/WplNLcuTmc

A golden cross is a powerfully bullish signal, and typically is a sign for investors that the asset is about to embark on a bull run. The opposite – a “death cross” – is a signal that a downtrend or bear market is ahead.

Following a long, arduous bear market, crypto investors are right to be enthusiastic about the bullish signal, but caution is necessary. Bitcoin in the past has formed a golden cross, only to then death cross, and then golden cross back once again before the last bull market truly kicked off.

Because there is a chance this could happen again, and history has a way of repeating itself, investors should proceed with caution.

However, if the golden cross stands, and doesn’t do another infamous death-cross fakeout, Bitcoin could go on to bring investors returns that are typically unheard of in most asset classes. 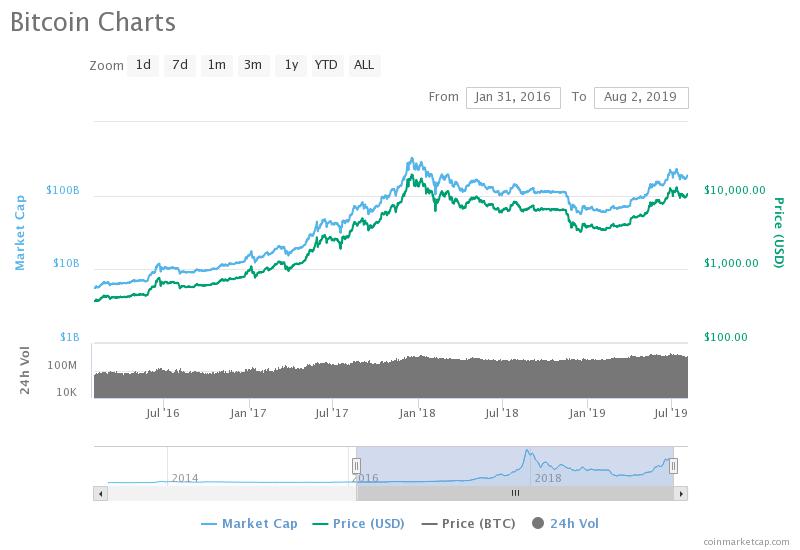 A similar rise percentage-wise would put Bitcoin price above $500,000 per BTC, but could take years to achieve that. From the time that Bitcoin signaled the golden cross to the top of the hype bubble was roughly a year and a half, which might suggest that it will top in December 2020.

Given how massive the market cap of BTC would need to be to achieve such a number, seeing that type of return again is highly unlikely, but also given Bitcoin’s ability to surprise people, anything is possible.

Tags: bitcoinbitcoin pricecryptogolden crossmoving averages
TweetShare
BitStarz Player Lands $2,459,124 Record Win! Could you be next big winner? Win up to $1,000,000 in One Spin at CryptoSlots