Next Article: Bitcoin Gains as Trump Threatens $300B Tariffs on Chinese Goods

Tezos (XTZ) is proving to be a better near-term investment than bitcoin this week. The altcoin, accompanied by favorable fundamentals, has surged by 44 percent in the last four days as it looks to close the week at an even higher rate.

As of 12:29 UTC, the XTZ/USD instrument was trading at 1.452, up 3.71 percent in the last 24 hours. The move upside brought Tezos market capitalization to circa $962 million, which makes 0.40 percent of the entire cryptocurrency market valuation. At its highest, the cap was around $1.457 billion. 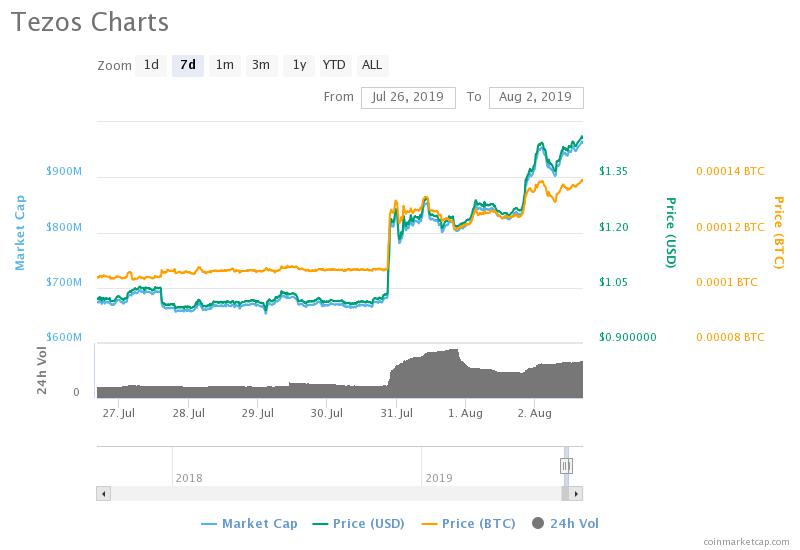 Tezos has Surged 16% in the Previous 24 Hours | Image Credits: CoinMarketCap.com

The surge accompanied a similar price action across the rest of the cryptocurrency market. Bitcoin, the world’s leading cryptocurrency, broke out of its interim bearish bias soon after the Federal Reserve reduced the interest rates by 25 bps. It further got a boost from US President Donald Trump’s decision to slap additional tariffs of worth $300 billion on Chinese imports.

Altcoins, which typically move in tandem with bitcoin, surged likewise on the news. Ethereum, the second-largest cryptocurrency by market cap, was up 2.87 percent on a 24-hour timeframe. Other assets, including Bitcoin Cash, Litecoin, and Bitcoin SV also surged similarly.

Nevertheless, Tezos reserved the title of the best performing crypto-asset this week after rising the maximum. It had great fundamentals fueling the price rally.

On July 30, San Francisco-based cryptocurrency exchange Coinbase Pro announced that it is going to add Tezos to its trading platform. The move followed the addition of Tezos staking services to another Coinbase division, Coinbase Custody, injecting confidence in the market about the blockchain project’s growth potential in the US.

“On Monday August 5, transfer XTZ into your Coinbase Pro account ahead of trading. Support for XTZ will be available in Coinbase’s supported jurisdictions, with the exception of New York State. Additional regions may be added at a later date,” — read the announcement.

The XTZ/USD instrument started posting gains right after the Coinbase announcement. On the day, the pair surged by as much as 26.97 percent – from $0.997 to $1.269. By the end third daily session, it had already extended its gains by setting a weekly high of $1.474.

While Coinbase has lifted the spirits of Tezos bulls, some events could foul the cryptocurrency’s upside.

Like Ripple, Tezos is currently facing a high-profile lawsuit from several investors who claim XTZ is a security, not a utility asset. Should the court agree with the plaintiffs, then trading XTZ on Coinbase – a US-based regulated exchange – would be illegal. Moreover, Tezos founder could be held accountable for selling securities without obtaining permission from the Securities and Exchange Commission.

Such events could negate a large percentage of Tezos gains.

Read More
Tags:tezos BitStarz Player Lands $2,459,124 Record Win! Could you be next big winner?
Next Post