National elections in a country like Argentina aren’t usually something that has the potential to roil international financial markets but it seems that somehow this time is different.

I mean, it’s not even the elections, it was just the primary that has everyone on edge. The general elections aren’t until October 27th.

What it seems to me is that macro investors are looking at this as yet another dramatic event to add to the escalating tensions in Hong Kong, snap elections in Italy, rapidly falling bond yields, and fresh calls for a global recession, as well as already high stock valuations that are painting a gloomy narrative ripe for a good old fashioned flight to safety.

Please note: All data, figures & graphs are valid as of August 13th. All trading carries risk. Only risk capital you can afford to lose.

Yup. That’s exactly what we’ve got on our hands at the moment, a flight to safety. Stocks are falling. Precious metals are rising. Bond yields continue to fall, a trend that has only accelerated due to investor unease.

As investors buy more bonds the yields continue to fall. Here we can see the yield on the US 10 year treasury, which is kind of the gold standard of the bond market. 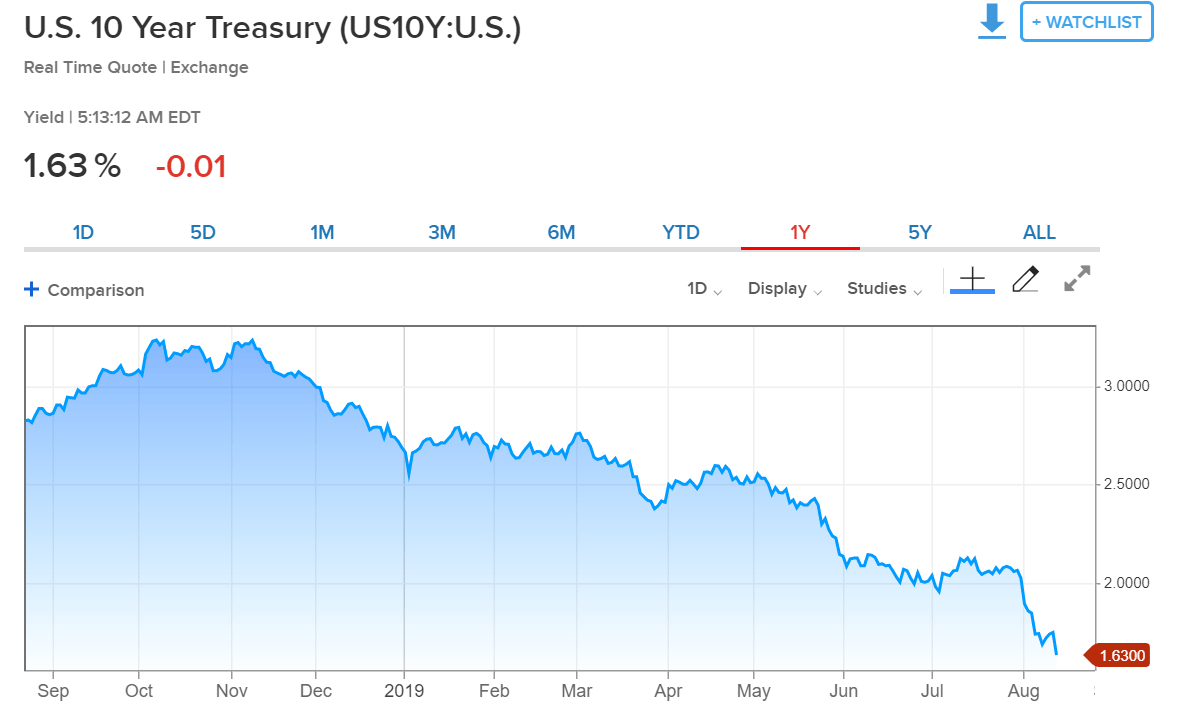 Currency markets concur. People are ditching high-risk currencies and gravitating to the safety of the Japanese Yen, Swiss Franc, and the US Dollar.

Bitcoin, on the other hand, has been a matter of some contention. Last week, investors were clinging to its status as a hedge against geopolitical uncertainty. This week however, after a large push from analysts who have reiterated the bitcoin is not a safe haven, it seems that the crypto market has taken a step back from the action.

Anybody who reads these updates frequently already knows that Argentina is a particular hot spot for crypto adoption. Just a few months ago, they even made it possible for commuters to pay for the local metro using cryptocurrency.

Argentinians are by far one of the most crypto literate populations on the planet. Not so much because they’re necessarily technologically advanced but out of necessity due to a long history of economic instability and an ever sliding Peso.

So, the obvious question that I’ve been fielding most of the day is, how come bitcoin isn’t reacting at all to the primary upset?

Well, but why would it?

Even though bitcoin is big in Argentina, Argentina is not necessarily big in bitcoin. It’s only a small country in the global market that is crypto.

No doubt most Argentinians have a lot more on their minds than bitcoin at present time. More likely, they’re staring at their television sets with emotions running high.

Furthermore, though I’m not familiar with the specific politics of the populist candidates who came out on top yesterday, it would seem to me that they are likely less crypto-friendly than the current Prime Minister, who we know for a fact is quite the advocate.

We could also ask though, why aren’t global bitcoin traders buying on the news of the falling Peso?

To which my feeling is that most are probably a bit wary to jump on this trade so close after the narrative of ‘Chinese buyers stepping in due to the falling Yuan’ was declared to be a dud.

Now, this is fantastic as it brings an abundance of freedom to the market in a country that had previously not given much indication on their crypto stance.

As far as adoption is concerned, this directly opens a new pathway where cryptoassets can be used legally with a healthy level of regulatory certainty, furthering the ability of these assets to prove themselves on a global scale where everybody will be able to see their benefits.

Still, as far as the price of bitcoin is concerned, there’s been no reaction to this either. Once again demonstrating the Bitcoin network’s extreme apathy to news events.

Have a wonderful day!