Next Article: Bitcoin Plunges $1,000 in a Few Hours as Crypto Markets Quake

In a pattern that has been rinsed and repeated countless times this year, crypto markets are crumbling as Bitcoin failed to hold support. The altcoins are still hopelessly tied to their big brother so any pain for it is magnified for them.

Over the past 24 hours crypto markets have shrunk to their lowest levels for almost three months. As billions left the space total market capitalization plummeted to $245 billion. All gains since late May have now been wiped out and altcoins are in danger of returning to their crypto winter levels if the rout continues. 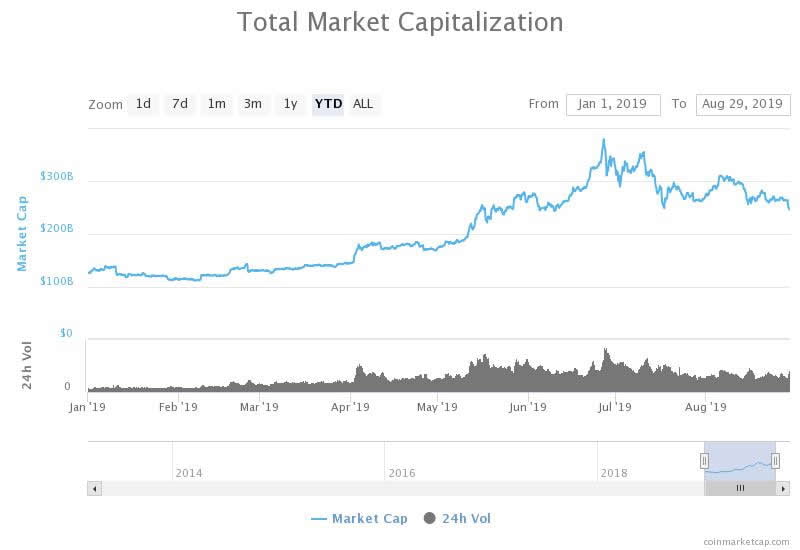 According to Tradingview.com Bitcoin dominance is still at 71.5% despite a thousand dollar dump. This means that the altcoins have suffered greater losses today, many of them in double digit declines. Bitcoin’s intraday high to low marks a loss of around 9% however the pain is greater elsewhere on crypto markets.

Ethereum, which has seen prices eroding for the past two months, has capitulated below $170 in a 10 percent plunge overnight. A death cross on the four hour chart a few days ago is about to be repeated on the daily chart as the 50 day moving average drops closer to the 200 day MA. This is a major bearish indicator which signals continuation of the down trend.

Development work on the Ethereum network is still ongoing with six new upgrades planned in the Istanbul hard fork slated for mid-October. This has not prevented the bears dumping the asset in panic over big brother’s fall through support however.

There has been little love for XRP either as the Ripple token gets crushed back to a yearly low of $0.25. A lot of bad press and FUD has inspired little confidence in the world’s third largest crypto asset recently.

The rest are faring no better with double digit losses for Litecoin, Binance Coin, EOS, Monero, Cardano, Tron, Dash, Ethereum Classic, Tezos and Chainlink. There are only a handful of low cap altcoins surviving the purge today and they include Golem, SOLVE and HedgeTrade.

The mess has not been missed by industry observers with RT anchor, Max Keiser, commenting;

“#Bitcoin dominance climbs as alt-season fails to materialize and alts resume downward trek to oblivion. BCH and BSV have another 90% drop to go.”

#Bitcoin dominance climbs as alt-season fails to materialize and alts resume downward trek to oblivion. BCH and BSV have another 90% drop to go. pic.twitter.com/muSHYRh6H1

Time to Be Bullish on Altcoins?

Some are clinging perilously onto hope however and see opportunity in the misfortune of many crypto assets. ‘WelsonTrader’ tweeted;

“Accumulating some alts within the next 24 hours, as I think we may see a bounce here! Bitcoin may also bounce at support around $9500-$9550! If we break below that, expect a blooody week!”

All eyes are on Bitcoin’s next move as the alts are bound to follow. At the moment it is also clinging perilously onto support around $9,450, but teetering on the edge of a deeper chasm.