Once again geopolitical drama is swarming the headlines and markets are falling.

The Hong Kong police have claimed their first victim with live fire ammunition. North Korea has managed to reach Japan’s Exclusive Economic Zone with a ballistic missile. China has just hosted an extremely elaborate military parade in a grand celebration of their National Day. Trump’s impeachment proceedings are proceeding. And Brexit is reaching what might be its final moment of truth.

All in all though, it seems to be concerns about global economic growth, rather than any political strife that has markets down today. Nevertheless, they are clearly receding from their lofty highs.

Make sure to reserve your spot in tomorrow’s quarterly webcast where we’ll discuss some of the best ways to position your portfolio: Click here to register now

Please note: All data, figures & graphs are valid as of October 2nd. All trading carries risk. Only risk capital you can afford to lose.

Sure, there’s a lot happening on the global political stage right now, but what really seems to be irking investors right now are the numbers.

In fact, things were pretty peachy yesterday up until the US produced their manufacturing PMI data, which was actually forecasted to project decent growth but ended up being the worst numbers for this particular stat in an entire decade.

Here we can see the exact moment that the figures were published (circled in purple) and the damage it did to the Dow Jones. All in all a plunge of more than 300 points, making it the worst trading day since August 23rd.

The sour mood has carried through the Asian session and well into European trading hours. Analysts are quite united on where the negativity is coming from.

It should be noted that both Gold and the Japanese Yen have reacted positively to the PMIs, undoubtedly due to their safe-haven status.

Watch out for the ADP numbers that’ll be published today at 8:15 AM in New York, followed by a speech from Fed members Williams and Evans tomorrow morning.

Sure, it would probably be easy to try and pin these moves on any number of geopolitical headlines, but bear in mind that most of these things have been ongoing and what seems most likely in my mind is that markets are simply reacting to the numbers more than anything else.

In the famous words of Bill Clinton, in a highly successful political campaign that ended up unseating Goerge H.W. Bush… 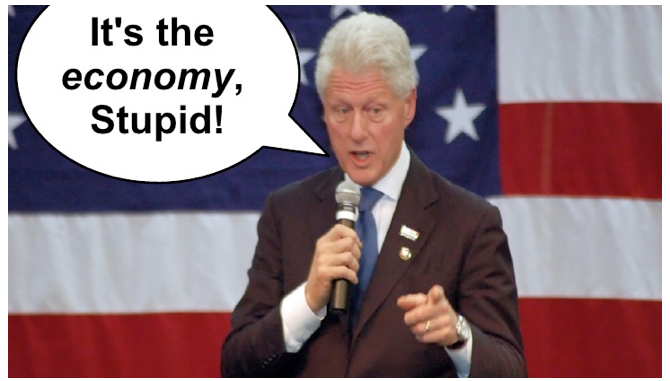 Sure, this is probably the 431st moment of truth that Brexit has faced, but as it seems we’re winding down to the final hours now.

As I write, Prime Minister Johnson is giving a moving speech to the Conservative party, laying out his last-ditch effort to reach a deal for a soft Brexit.

After lots of laughter and much applause, he has firmly passed the ball back to the EU, who can either work within his framework and make a deal by the end of next week or prepare for a hard Brexit in an international offer to take it or leave it.

Though the Pound is testing the lows, it actually seems to be holding up remarkably well. Not sure if I’ve said this before, but my theory remains firm that it’s the BoE who moves the Pound and politics, thick as they may seem are a distraction.

In my mind, the protests were likely to relax somewhat after Hong Kong’s CEO Carrie Lam scrapped the controversial extradition bill a month ago but it seems that things have only gotten worse since then.

On August 15th, one of the leaders of the protest movement, Chen Haotian, called for HK residents to start pulling their money from Chinse banks in defiance of the regime’s monetary authority. Well, that didn’t really work out well as the banks had no problem remaining liquid as they reportedly drove in truckloads of cash to meet the withdrawal demands.

Now it seems that some of that cash is filtering into a new home, bitcoin.

Not all of it, of course, not by far, but according to the data from the peer to peer site LocalBitcoins, the demand for bitcoin in Hong Kong is at the highest levels ever recorded. 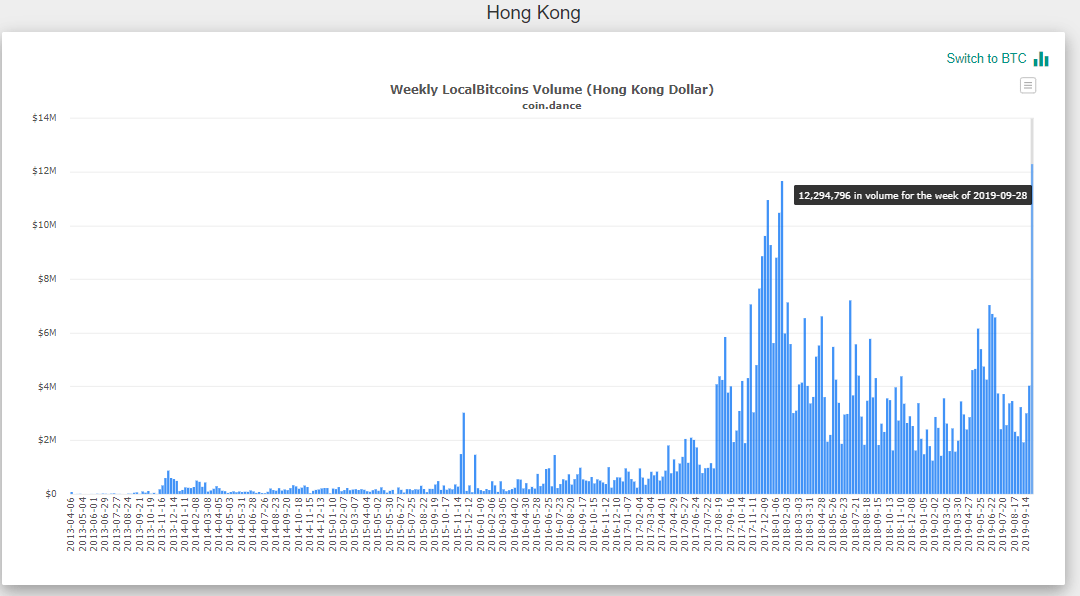 In total, 173 BTC was traded over the last week, which may not seem like a lot, but it’s still more than double what the Bakkt futures contracts traded on their first day.

Of course, this is only one website and it’s entirely possible that this spike was caused by only a few transactions. Truth is, we’ll probably never really know what the peer to peer transactions on the streets look like.

Still, I can’t help but feel that this could very well be a sign that some Hong Kong protesters are seeing bitcoin as a way to opt-out of the local economy, which is run by governments and financial institutions.

As we stated in our update last Friday…

Bitcoin adoption might end up being hastened by Wall Street, but it will almost certainly stem from the emerging markets. If you want to know the true value of crypto ask an Argentinian, or Iranian, or a Turk…. or Venezuelan.

We can probably now add Hong Kongers to the list.