Next Article: Bank President Says US Digital Currency Is Inevitable

At this point, it’s quite clear that the future of finance is digital. Well, it’s already digital. I mean, nobody really holds certificates in their safe anymore. What I’m talking about here is tokenization.

Digital assets are simply superior to traditional financial assets. The ability for an investor to take personal ownership and the freedom to transfer it directly to anyone at any time without the need of a third party is a great advantage but it goes even further than that.

It’s not just me, or eToro, or even the crypto industry saying this. Major banking institutions are now starting to understand this as well.

In Stuttgart Germany, the world’s very first fully regulated digital assets trading desk opened just last week. The SIX stock exchange in Switzerland is planning to open a similar exchange by the end of next year. In Japan, the leading financial institutions met on Monday to form a new association for Security Token Offerings.

That’s right. The firm that revolutionized the stock industry by inventing the index fund as a way to save investors money is now looking to tokenize the global currency markets.

Details of the plan are still heavily guarded, but according to the source, the system has already been running on the down-low for two months.

Imagine cutting out the middleman of the largest market on Earth. Peter Tosh once dreamed big when he sang Legalize It and it seems his dreams are finally being realized. The dream of tokenization and the disruption of the global financial system will likely come a lot quicker.

Please note: All data, figures & graphs are valid as of October 4th. All trading carries risk. Only risk capital you can afford to lose.

Some data released yesterday has given a rather sobering confirmation to traders that the US economy is indeed slowing down.

As you’ll recall, the US manufacturing PMI released on Tuesday showed production is contracting in the world’s largest economy and sent the markets into a bit of a tailspin. The numbers out yesterday, while not negative, did confirm that things are slowing down quickly.

We did get a chance to watch this number released and react to it in real-time in yesterday’s Webcast. The recording is available here. (Timestamp 29:28) 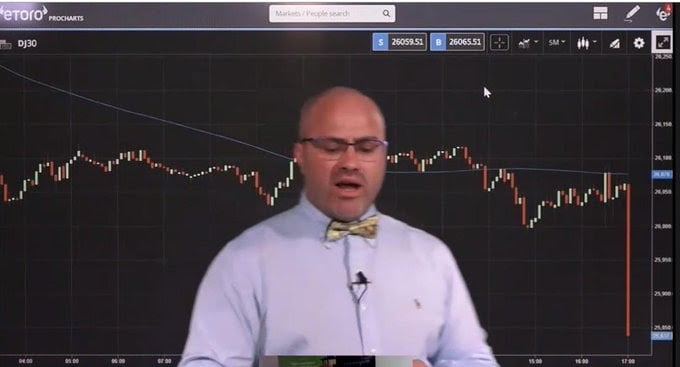 I must admit that the market beat me with a bear trap this time. Within the next few hours, the market had made a full recovery. I’m still holding on though. So we’ll see how that goes.

The sudden change in direction was likely caused by a very sudden realization that the Fed has the markets’ back. The probability of a rate cut when the Fed meets on October 30th has literally skyrocketed from 40% to 80% over the last few days.

There are another two events before we close out the week that should impact markets.

Number one is the NFP jobs report from the United States. At this point, traders are very data sensitive. So this announcement will likely be watched even more closely than usual.

Analysts are forecasting the report to show about 145,000 jobs added in September and hourly wage growth of 0.3%. These predictions are already pretty low so it’s likely we’ll get an easy win but if they do fall short, there could be heck to pay.

Whatever happens with the NFP though, markets will have only a few hours to prepare for the Fed, which is a huge number two.

Chairman Jerome Powell is due to deliver a speech at 2:00 PM EST. We’ll watch closely for any reaction to the above data.

This weekend’s entertainment segment is dedicated to all of our XRP fans. As you’ll see, I’ve done an exclusive interview with a group called the XRP Zoo where we went in-depth on some of the recent updates to the Ripple Network. Hope you enjoy!!

Wishing everyone a wonderful weekend ahead!