Not sure if you have any plans for next week, but if you are able to get away for a day or two, come join me in Amsterdam.

Yeah, it was short notice for me too, but it’s now been confirmed that I’ll be representing eToro and talking about the markets at TNW’s Hard Fork Summit.

Though I can’t get you a flight and hotel, I can likely get you into the conference for free. To apply for a free pass, please click this link and plug in your details. We only have a limited amount of tickets available so please only apply if you plan on attending.

Incidentally, I noticed a plethora of cheap roundtrip flights for those in the surrounding area. Hint hint to London, Germany, and France.

Please note: All data, figures & graphs are valid as of October 7th. All trading carries risk. Only risk capital you can afford to lose.

The US jobs report out last Friday did indeed reveal some keen insight into the state of the economy even though the numbers were all over the place.

Let’s break it down…

The headline number, which shows how many jobs were added came in a bit shy of estimates. Overall, the addition of 136,000 jobs is a bit weak but not alarmingly so.

What was seen as a setback is the average hourly earnings that came in at exactly zero percent, which is the lowest wage growth in two years.

What was most surprising though, is the unemployment rate, which is now at its lowest levels since 1969.

How did the markets react?

The market reaction was surprisingly positive. Despite all the analysts who were saying before the announcement that the key figure to watch was the wage gain, it seems that after the number was produced many headlines conveniently turned their focus to the unemployment rate.

Here we can see the markets taking a very risk-on attitude at the time of the announcement (purple circles). Stocks went up, gold and the Yen dropped, and US treasury bonds caught a bid at the market open.

Bitcoin continued to test recent support levels over the weekend but as of this morning, the entire crypto market seems to be making a positive push. Here we can see that XRP, IOTA, and TRX are outpacing the rest of the markets on percentage gain today. All three of which seem to have seen significant technical progress recently. 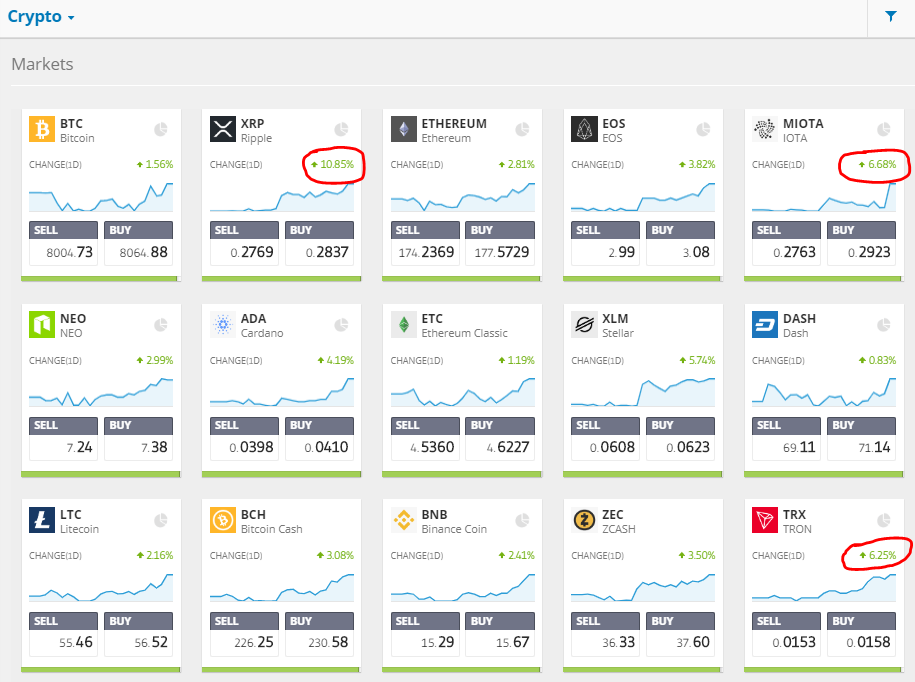 The September 24th crypto market drop did hit bitcoin harder than most of the altcoins, and it seems that since that day some of the altcoins have been outperforming in general. However, if we look at the entire market from the June peak, we can see that double-digit losses are pretty common.

So, while it’s nice to see a lot of green on the short term charts, we need to remember that a) this market is still very correlated and b) it could take some time for these staggering losses to be clawed back.

Hypothetically speaking, if we do continue to see bitcoin trailing the rest of the cryptos, and if indeed we see a retracement of some of these losses, we could have a nice case for a new altseason. For now though, we’re still deep in the muck.