eToro Market Update: Whatever it Takes!

Next Article: IBM and Credits to Make IoT Data Secure

Of the many takeaways from Zuckerberg’s appearance on Capitol Hill yesterday, the one thing that stood out for me was a comment from Representative Tom Emmer who pointed out that a vast majority of the questions being asked were ill-prepared and/or unrelated.

“Congress is nowhere close to catching up with some of the most basic technologies affecting our time.”

Indeed, there were probably at least as many, if not more questions about Facebook’s community standards policy than there were about the Libra project.

Still, what seems to me is that Facebook’s strategy to highlight the difficulties of innovating in the United States, especially in the face of Chinese progress, has paid off handsomely. We do hope that Facebook is successful in its mission to bring regulatory clarity to crypto USA.

We’ll take a good look at the market reaction below.

Please note: All data, figures & graphs are valid as of October 24th. All trading carries risk. Only risk capital you can afford to lose.

One stock that is often seen as a bellwether for the global economy is the well-known maker of industrial equipment Caterpillar, who reported their earnings yesterday with a rather depressing outcome.

It’s now quite clear to all, that the current trade wars that have been dominating headlines over the last few years are inflicting real damage to business confidence. Even the game making giant Hasbro has blamed their recent troubles and a 15% drop in share price on the ongoing trade wars and tariffs.

What seems interesting to me, and I know I’ve been using the ‘R’ word a lot lately, is that investors don’t seem too concerned with CAT‘s under-performance. Here we can see the initial dip when the report was published (purple circle), followed by a mean rally that took it to fresh highs.

Today we will bid a teary farewell to the outgoing president of the European Central Bank, who will deliver his last interest rate decision before leaving office next week.

Super Mario Draghi has had a pretty good run as the ECB boss. He will always be remembered as the man who saved the European Union with a 2012 speech in which he stated that “the ECB will do whatever it takes to preserve the Euro.”

In this case, what it took was a whole lot of money printing. So, let’s take a look at his legacy. Here we can see the ECB’s balance sheet from the time that he took office in November 2011 until today.

All in all, throughout his tenure, €2.2 trillion was injected into the global economy. His last major act as President was to reinstate the QE program, which is set to resume next month at a pace of €20 billion per month for the foreseeable future.

Here’s to hoping that his successor will be able to do more with less.

Shortly before Zuck took the stage before the House Financial Services Committee, bitcoin broke a major level of support that it had been working on for almost a month.

Here’s a chart that was tweeted by stock analyst Mark Dow moments before the movement. He totally called it, possibly even caused it. 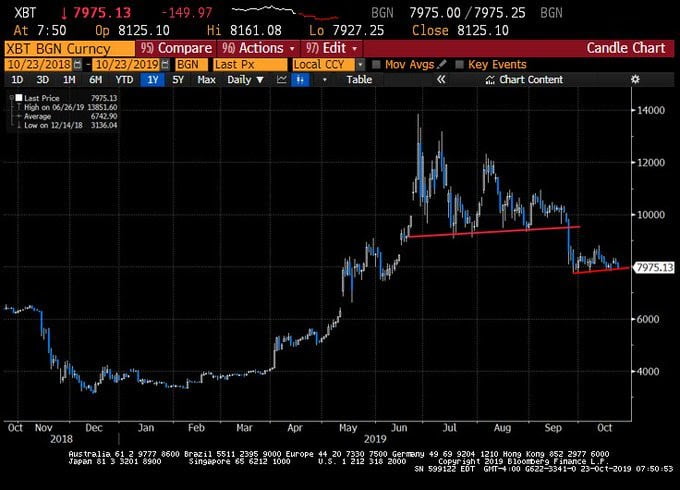 As we’ve often seen in the past, when bitcoin gets volatile, volumes go up. Yesterday was no exception. Most notable are the new bitcoin futures contracts on Bakkt, which smashed a new all-time high level of trading activity. A total of 640 BTC changed hands with an estimated value of $4.8 million. 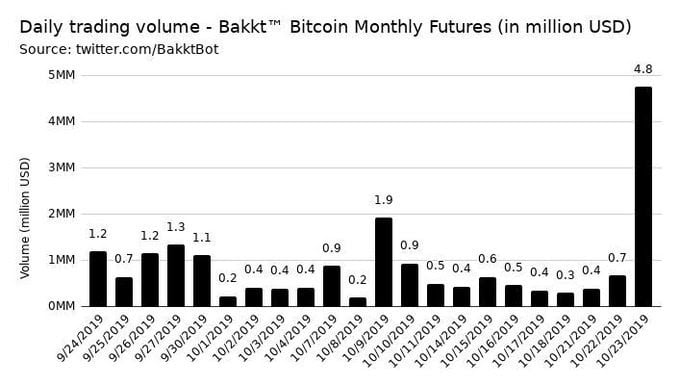 Across the top crypto exchanges, volumes saw a significant breakout. According to Messari data, the top 10 crypto exchanges saw about triple what they’ve been tracking over the last week.

At this point, it’s really unclear what caused the movement or how long the action will last. These things do have a way of snowballing and if we can build some momentum here it’s very possible we’ll be in for a larger movement up or down.

However, if the activity was solely surrounding Zuckerberg’s testimony or the downside breakout, it’s quite likely that volumes could fall back down as easily as they rose. So, I guess we’ll have to wait and see.

For some light entertainment, feel free to watch this crypto duel between myself and YouTube trader Erik Crown. According to YouTube, Crown “destroyed” me. But I guess I’m guilty here of breaking a cardinal rule of the Internet “never read the comments.”

Many thanks to all of you for continuing to send your amazing feedback, awesome insights, and thoughtful questions. They are my main source of inspiration and I enjoy every one.

Have an incredible day ahead!