eToro Market Update: Back to Life

After an extended period of low volumes and dismal sentiment, in a sudden instant, last Friday the crypto asset class has snapped back to life. (Cue the music)

We’ll go into the specifics of what, when, how much, and where below but the why is very clear…

The announcement from Chinese President Xi Jinping that China should “seize the opportunity” to adopt blockchain has had a sweeping impact across a great many markets.

Less than one day after Mark Zuckerberg informed Congress that “If America doesn’t innovate, our financial leadership is not guaranteed,” China has made its move.

The US-China trade war now has a new battleground. After focusing on agriculture, imports-exports, technology, patent infringements, and spyware, the focus is now squarely on FinTech.

Only, this is more of a race than a war and it looks like China has a colossal head start.

Please note: All data, figures & graphs are valid as of October 28th. All trading carries risk. Only risk capital you can afford to lose.

Aside from the excitement in Chinese tech stocks mentioned above, volatility in many financial markets is pretty low today.

Earning’s season continues to trudge on. The headliner to report after the bell this evening is Alphabet, of course, but we’ll also get updates from T-Mobile, AT&T, HSBC, and Spotify.

Also, UK Parliament is set to vote on something today. Their plea for a 3-month extension has graciously been granted by the EU. So the new date for Brexit is now January 31st. PM Johnson would like to get a general election in ASAP.

China doesn’t generally dictate policy by tweet. Specifically, on bitcoin and blockchain, their strategy has been well known for quite some time.

There have been several cases in Chinese judicial court that protected the rights of holders of digital assets showing that ownership of an asset on a blockchain is considered legally binding by Chinese Law.

Furthermore, China’s central bank the PBOC has been researching blockchain as far back as 2014 and are now preparing to roll out their own Digital Yuan that will have its own blockchain.

Mind you, the new Yuan blockchain will look nothing like the opensource network that is Bitcoin. It will be a two-layer blockchain with the PBOC at the top and other Chinese financial institutions underneath.

To make way for this, following the President’s statements, Chinese Congress has now passed a new Cryptography act that will go into effect at the start of 2020.

So why the excitement around bitcoin?

China’s policy on bitcoin has also been known for a while. Contrary to popular belief, it’s doesn’t seem to be their number one concern.

Sure, they want to keep citizens from using bitcoin to avoid capital controls and so have ostensibly banned all BTC-Yuan trading on the mainland. They’ve also decided on a multi-year strategy to reduce bitcoin mining activity within the country.

All things considered though, this seems to be more like a ‘live and let live’ non-interference and non-integration strategy rather than a ‘burn it with fire’ outlook.

For many people in this industry bitcoin and blockchain are inseparable and I believe that it’s apparent to most people that Bitcoin is the backbone of the crypto industry.

According to commonly cited data, WeChat searches for the word blockchain skyrocketed more than 1100%, but bitcoin searches also had a noticeable bump of 233%.

Searches on Baidu as well have come way up for both bitcoin & blockchain. 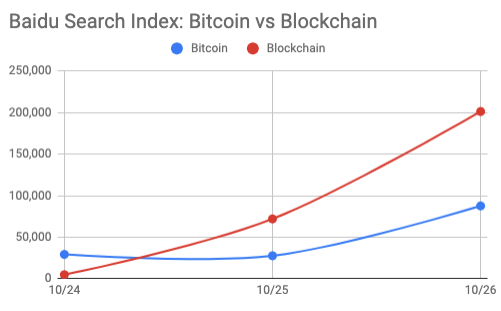 Moving over to the west, we can see that Twitter sentiment hit its highest level in two months following the price surge.

Aside from bitcoin, we can see that the projects surging the most right now are the blockchain networks that are more regulatory compliant in China. Indeed, these are the ones that stand to gain the most.

Most notable, NEO, Ontology, and Tron are outperforming during this rip.

For what it’s worth, following the market completely shirking off positive news from Fidelity and Bakkt, the Chinese drive is impossible to ignore and it’s out in the open now.

Volumes across the top exchanges are about five times higher today than they were a week ago, Bitcoin volumes on CME and Bakkt are also notably high and sentiment across the board is much stronger than it was last Wednesday.

My friends, I do believe that the crypto funk might be broken and this kind of excitement certainly has a way of snowballing.